Following the victory, Rajasthan moved to second in the team standings with 18 points from 13 games, behind leaders Chennai Super Kings (20 points).

The visitors then rode on Rahane's unbeaten 59 off 49 deliveries and useful contributions from Sanju Samson (47 not out) and Shane Watson (31) to chase down the target with an over to spare.

Rajasthan's chase, however, did not start on a good note as they lost skipper Rahul Dravid early. He was cleaned up by left-arm spinner Bipul Sharma.

Rahane and Watson then shared 65 runs off 50 balls for the second wicket to set the platform for Rajasthan's chase. 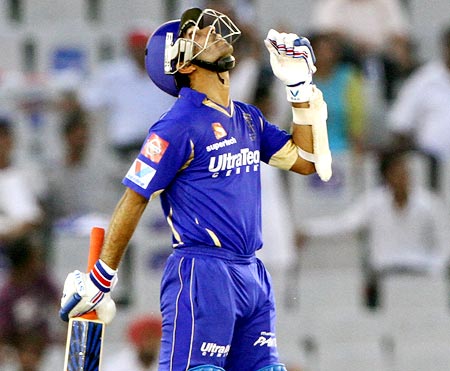 Just when it seemed the duo would run away with the game, Piyush Chawla went through Watson's defence. The Australian all-rounder laced his 25-ball innings with three boundaries and one huge hit over the fence.

But that was all Kings XI could manage as Rahane and Samson played sensibly thereafter, mixing caution with aggression, to guide Rajasthan home without any further damage.

While Rahane struck three fours and as many sixes during his knock, young Samson's knock came off just 33 balls with the help of five hits to the fence and one over it.

Earlier, Marsh (77) and Gilchrist (42) added 102 runs for the second wicket, before Rajasthan Royals’ bowlers put the brakes during the death overs.

The last seven overs of the innings produced only 45 runs and Kings XI lost five wickets in the process.

Ajit Chandila struck in the first over when Mandeep Singh (0) lobbed a simple return catch to him without a run on the board.

Gilchrist, who had dropped himself from the playing eleven in earlier matches, however, batted positively from the onset, starting off with a cover-drive off S Sreesanth.

A flurry off boundaries followed from Gilchrist's bat as he struck Sreesanth for two meaty blows in his next over. When left-arm seamer James Faulkner came in to bowl, he steered successive deliveries to the boundary as the home team took off after the first over dismissal.

Marsh, who came in after Mandeep's dismissal, was boosted by Gilchrist's counter-attack and he lofted Chandila for a six and followed it up with a boundary as 14 runs came off the seventh over.

The 100 came up in the 13th over while Marsh duly reached his 50 off 44 balls, playing Faulkner towards fine leg.

However, soon after the century stand, Gilchrist was dismissed by West Indian Kevon Cooper as he committed early to a slower delivery. He faced 32 balls and hit six fours.

David Hussey (1) was castled by Watson but there was no stopping Marsh as he hit Faulkner over long-on for his second six and followed that up with a cover-driven boundary.

When Cooper bowled Marsh with another slower delivery, the batsman had faced 63 balls, hit six boundaries and two sixes.

Man of the moment David Miller was also snapped up by Cooper, Rahane taking the catch at deep mid-wicket.

Kings XI then lost the momentum and finished way below what was expected of them after being 100 for 1 after 13 overs. 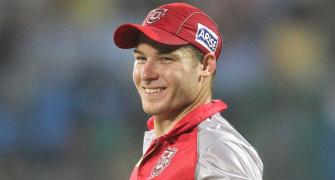 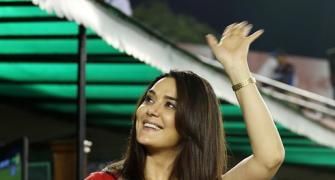 How the IPL teams are placed after 55 matches 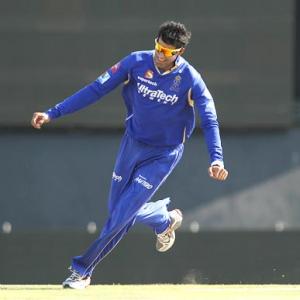 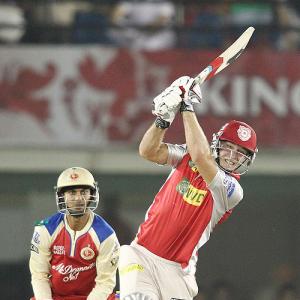