Having notched up a morale-boosting win over Delhi Daredevils minus their star players, Royal Challengers Bangalore face another test of character when they face Kings XI Punjab in their third match of the Indian Premier League, Season 10, in Indore on Monday.

RCB began their campaign without skipper and star batsman Virat Kohli as well as another key player A B de Villiers due to injuries and lost their opening match against defending champions Sunrisers Hyderabad.

RCB have also lost India batsman Lokesh Rahul for the entire tournament owing to an injury and the talented Sarfaraz Khan will most likely be unavailable for the season after hurting himself on the field during a practice match.

Watson had marshalled his bowling resources well in RCB's 15-run win over Delhi at home on Saturday, himself taking one wicket and bowling economically by conceding just 21 runs from his quota of four overs.

Watson choked Delhi's Amit Mishra for runs at the closing stages of the match and that contributed to RCB's first win of the tournament. He also contributed a run-a-ball 24, the second highest score, in RCB's total of 157 for 8.

Billy Stanlake and Yuzvendra Chahal grabbed two wickets apiece but it was Pawan Negi, picked by Watson to bowl the final over, who did the trick for RCB by dismissing Rishabh Pant, the only Delhi batsman who could have won the match for his side.

On the batting front, RCB surely missed Kohli and De Villiers though Kedar Jadhav once again showed his utility by smashing a 37-ball 69 to single-handedly take his side to 157 for 8. Big hitter Chris Gayle failed to get going as he scored just 6 on Saturday after his 32 in RCB's first match. 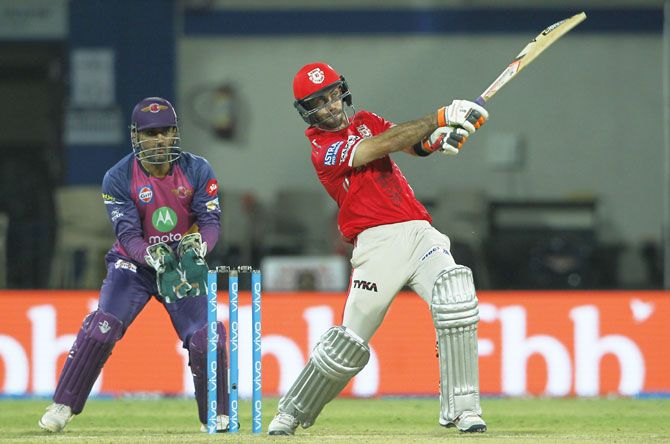 IMAGE: King's XI Punjab's Glenn Maxwell lead his team from the front, scoring a brisk 44 in 20 deliveries, in their run-chase against the Rising Pune Supergiant in Indore on Saturday. Photograph: BCCI

Kings XI Punjab will come into Monday’s match with a lot of confidence having beaten Rising Pune Supergiant in their opening match on Saturday.

Australian Glenn Maxwell led from the front with a quick-fire 44 off just 20 balls to chase down the target with six balls to spare.

Maxwell was making his captaincy debut in the match against RPS and he would look to continue against RCB on Monday also at the Holkar Stadium which is KXIP's second home venue along with Mohali.

Though they have retained their core group, Kings XI bought eight players in the IPL auction including well known names like Morgan, Darren Sammy, Martin Guptill and Varun Aaron.

The KXIP squad has been training at the Holkar Stadium for about 10 days now and should be well-versed with the conditions.