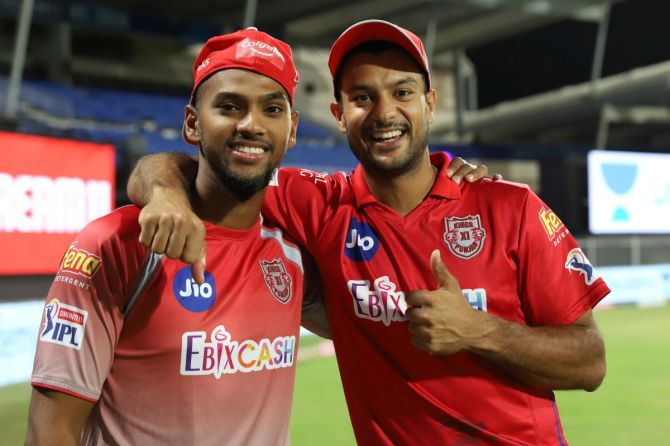 IMAGE: Kings XI Punjab's Nicholas Pooran and Mayank Agarwal are all smiles after their win over Royal Challengers Bangalore in the Indian Premier League at Sharjah Cricket Stadium, in Sharjah on Thursday. Photograph: BCCI

Pooran came in bat at the last ball of the innings when Punjab need one run from the last ball. He smashed the ball for a six and handed the eight-wicket win to his side and grabbed the crucial two points.

Earlier in the tournament, Punjab got off to a similar situation in their first game against Delhi Capitals where they failed to score a single run in the last ball and the match went to Super Over where Punjab lost the game.

"The last over started, it was like deja vu. Last three balls, one run it was like the Delhi game all over again but just the difference is that I was in the dugout. A million things were running in my mind, I was not clear, to be honest, what I was gonna do. I never wanted to be in that position. After sitting out for so long, I have to bat the last ball," Pooran told Mayank Agarwal in the video posted by iplt20.com.

Agarwal played a knock of 45 off 25 and provided a solid start along with skipper KL Rahul (61). Then Chris Gayle joined the party and scored 53 runs, playing in his first game of the season.

"It was nice, I thought it was very important that we get off to a good start because the wicket was a little slow and the new ball was important. If we got runs with the new ball, it would make it a lot easier. So, that was the thought behind it and I thought if I get few of the middle then I will get keep going," Agarwal said.

Pooran termed Gayle the greatest T20 batsman and said it is wonderful to see his scoring runs.

"For me, Gayle is the greatest T20 player who has played the game. When Chris is batting you always have a chance of winning the game. Once he is there, it is a different mood in the camp obviously. He started off slowly but he has not played cricket for a long time which is acceptable. He has shown once more why he is the greatest T20 batsman. It is wonderful to see him get runs," he said.