Images from the Indian Premier League match between Sunrisers Hyderabad and Royal Challengers Bangalore, in Abu Dhabi, on Wednesday. 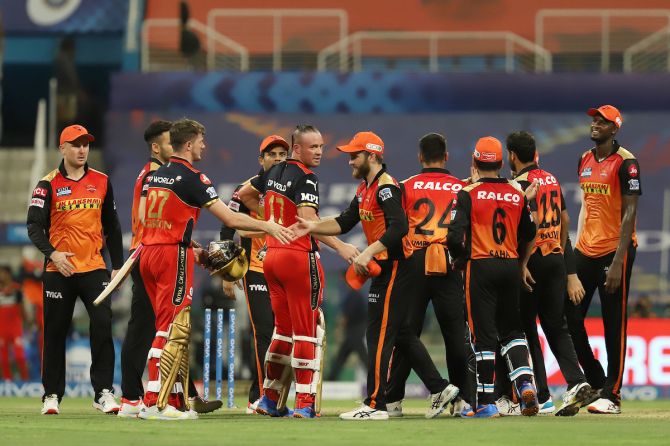 Royal Challengers Bangalore made a mess of their run-chase as bottom-placed Sunrisers Hyderabad dented their hopes of a top-two finish with a narrow four-run victory in the Indian Premier League match, in Abu Dhabi, on Wednesday.

After putting up a modest 141 for 7, the Sunrisers returned to restrict the Royal Challengers to 137 for 6 and register only their third victory in this year’s tournament.

While the Royal Challengers stay in third place with 16 points, behind Chennai Super Kings (18) and Delhi Capitals (20), Wednesday's result means Delhi Capitals are now assured of a top two finish in the eight-team league.

Devdutt Padikkal (41) and Glenn Maxwell (40) scored the bulk of the runs but RCB kept losing wickets and faltered in the end. 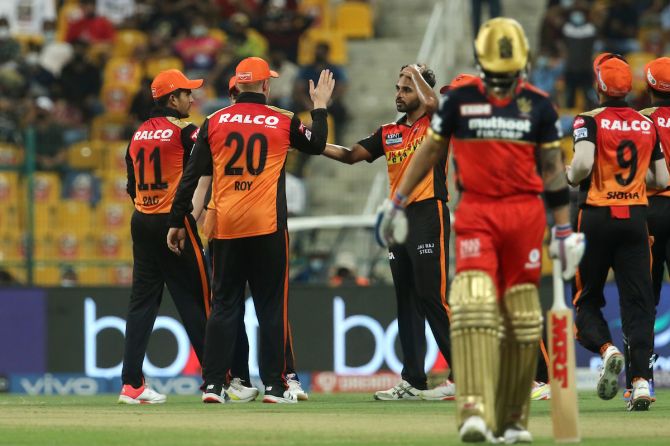 Defending 18 off the last two overs, Jason Holder bowled a superb over, giving away just five runs for one wicket.

AB de Villiers smashed a six off the fourth ball of the final over, bowled by Bhuvneshwar Kumar, but couldn't take the team home as he failed to pull off a six which the team needed off the last ball. 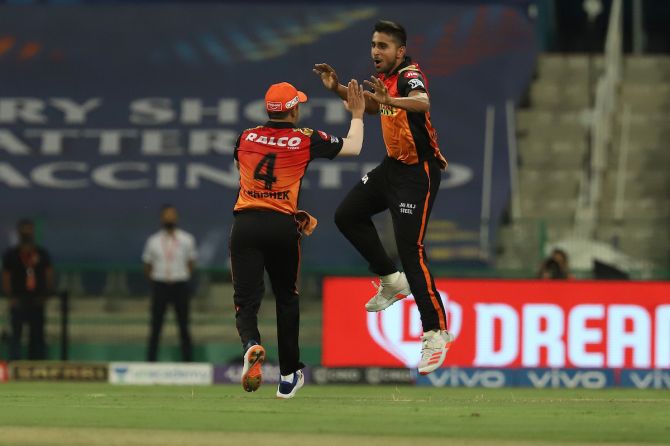 The Royal Challengers, in reply, were dealt an early blow when Bhuvneshwar trapped Virat Kohli leg before in the first over.

The decision to promote Daniel Christian at number 3 did not work as he was deceived by a slower delivery from Siddarth Kaul.

At 18 for 2, Srikar Bharat joined hands with Devdutt Padikkal and produced two handsome shots for a six and a four to take RCB to 37 for 2 in six overs. 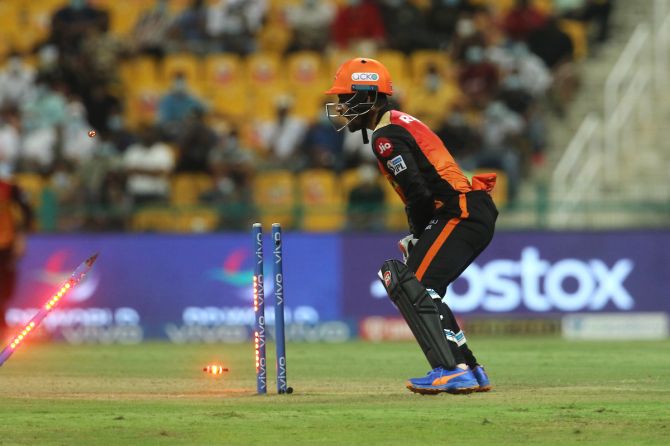 New pace sensation Umran Malik then struck with his fifth delivery, removing Bharat, as RCB slipped to 38 for 2.

New-man in Maxwell made his intent clear, clobbering Rashid Khan for a maximum. He repeated the treatment again, sending the Afghan spinner over long-on and then swept him for another four.

But with Malik clocking 150km plus consistently, RCB decided to target the other bowlers. 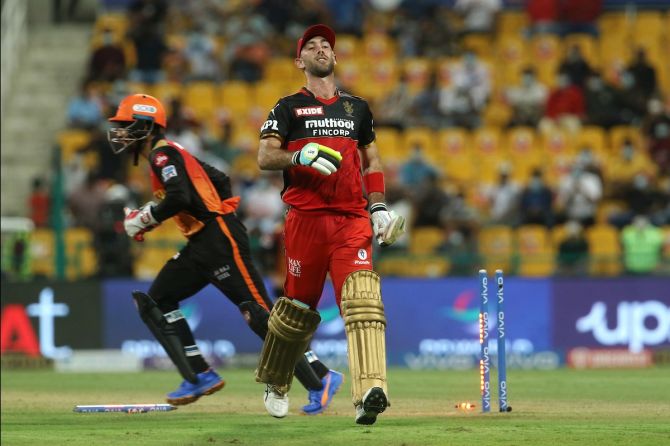 However, a poor call by Padikkal ended with Maxwell being run-out.

Then the former too was caught at the boundary line as RCB were further reduced to 109 for 4 in 16.5 overs.

Needing 29 off 18 balls, Shahbaz Ahmed smashed two fours to bring the equation down before being dismissed by Holder in the 19th over.

With George Garton and de Villiers on the pitch, the Royal Challengers required 13 in the last over. Bhuvneshwar Kumar made no mistake as he conceded just eight to see the Sunrisers through in a dramatic finish. 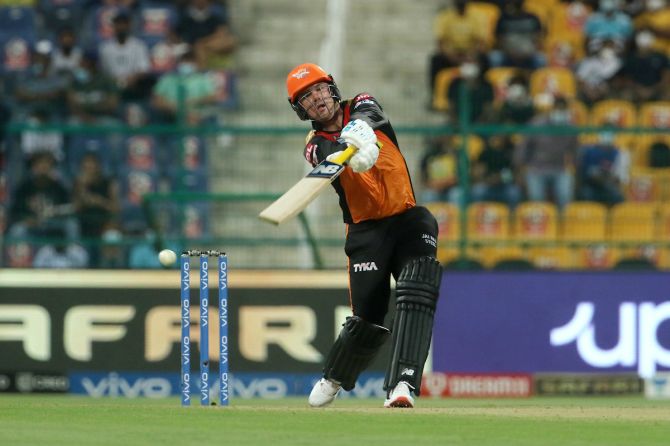 Earlier, Roy's 38-ball 44 was the cornerstone of the Sunrisers' innings as Royal Challengers Bangalore produced disciplined bowling to restrict them to 141 for 7.

Roy shared a 58-ball 70-run stand with skipper Kane Williamson (31) to set the platform before Sunrisers lost three quick wickets for two runs in seven balls and eventually ended up with a below-par score, at the Sheikh Zayed Stadium. 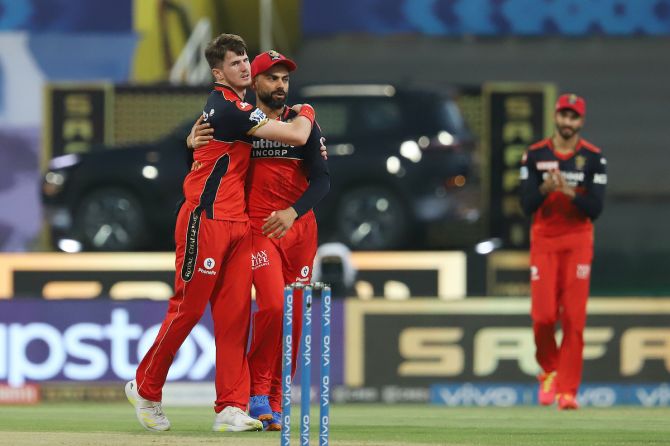 Harshal Patel, with three wickets for 33 runs, emerged the most successful bowler after Royal Challengers skipper Virat Kohli won the toss and opted to bowl.

George Garton struck early with the wicket of Abhishek Sharma, but got only two overs to bowl, conceding 29 runs.

Daniel Christian took two wickets for 14 runs, while the spin duo of Yuzvendra Chahal (1 for 27) and Shahbaz Ahmed (0 for 21) kept the Sunrisers batting in check with their guile.

Asked to open the innings, Abhishek smashed a four and six off Garton in the second over. He received a reprieve earlier, dropped by Mohammed Siraj in the deep, but was soon out, caught by Glen Maxwell at mid-on. 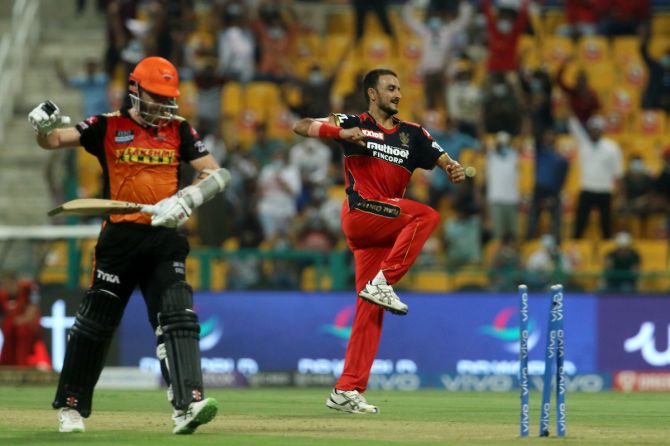 Williamson started off with a good-looking cover drive and then pulled one from Siraj for another boundary through square leg. 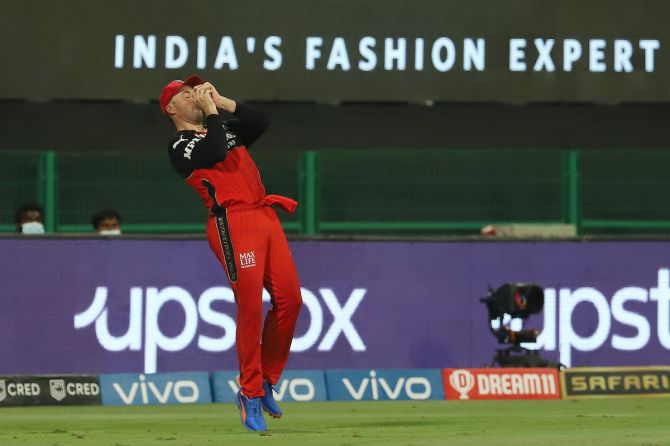 The New Zealand skipper was all elegance as he played two sweetly-timed shots for two more boundaries off Garton.

Left-arm spinner Shahbaz attacked the stumps, but when he erred Roy was quick to pull him through square leg.

At the end of Powerplay, the Sunrisers were 50 for 1.

The spin duo of Shahbaz and Chahal were brought on and they did not allow the batsmen an opportunity to free their arms. 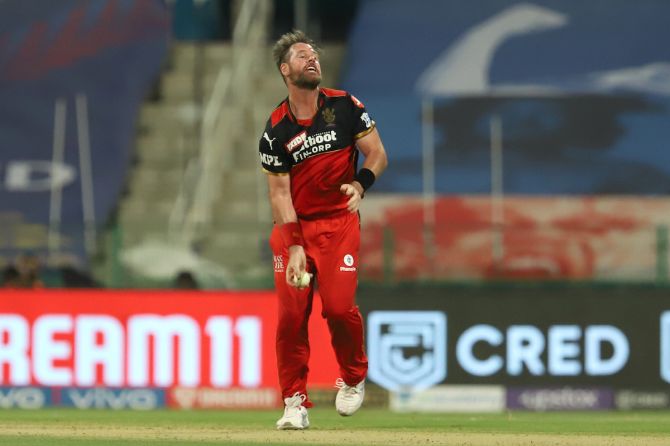 IMAGE: Dan Christian celebrates after taking the catch off his own bowling to dismiss Jason Roy. Photograph: BCCI

While Roy lived dangerously, Williamson's stumps were rattled by Patel with a cutter when he tried to create room for himself and the Sunrisers were reduced to 84 for 2 in the 12th over.

Priyam Garg smashed a six off Chahal before being caught by AB de Villiers off Christian in the next over.

Five balls later, Christian pulled off a sensational catch off his own bowling to dismiss the well-set Roy. 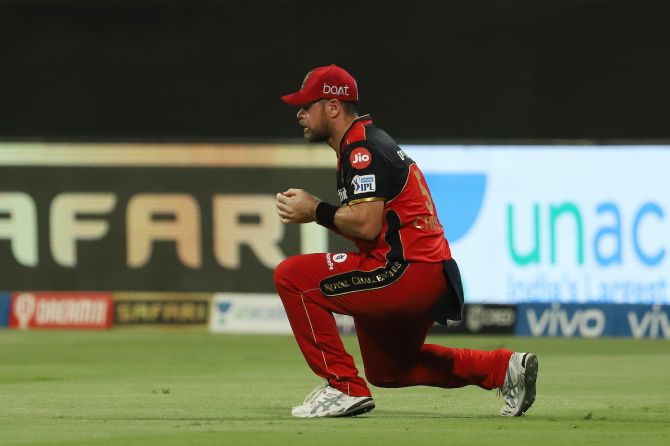 Chahal then trapped Abdul Samad in front of wicket off the first ball of the next over and the Sunrisers were reeling at 107 for 5 in 15.1 overs.

Wriddhiman Saha was next done in by a slower delivery by Patel.

Rashid Khan (7 not out) and Jason Holder (16) tried to accelerate the scoring in the last two overs before the latter fell off the last ball.