Images from Tuesday's IPL match between SunRisers Hyderabad and Delhi Capitals in Dubai. 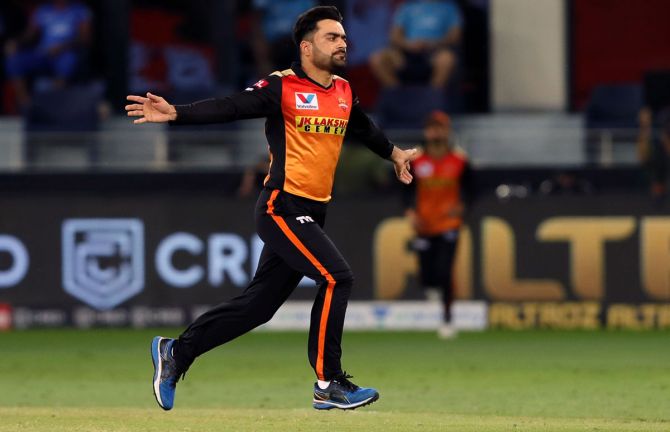 SunRisers Hyderabad stayed in contention for a berth in the play-offs of the Indian Premier League with a comprehensive 88-run victory over fancied Delhi Capitals in Dubai on Tuesday.

Put in to bat, the SunRisers, spurred by blazing knocks from openers David Warner and Wriddhiman Saha, posted a mammoth 219 for 2 and then dismissed the Delhi Capitals for 131. Afghanistan spin ace Rashid Khan was the wrecker-in-chief, claiming three wickets for seven runs in his four overs. The feature of his spell was an astonishing 17 dot balls!

The victory took the SunRisers's tally to 10 points from 12 games, while Delhi are third in the points table. 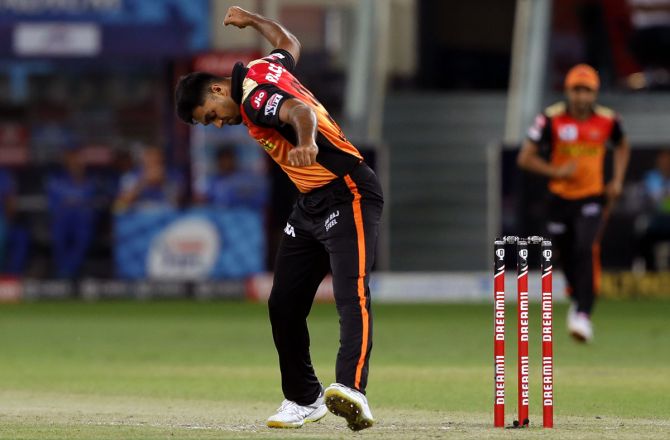 Sandeep Sharma rocked Delhi early with the wicket of Shikhar Dhawan for a duck in the opening over, while Shahbaz Nadeem accounted for Marcus Stoinis (5), who was elevated to number 3, in the next over.

Rashid then left Delhi in a mess, taking two wickets in his first over.

Shimron Hetmyer was bowled for 16 and Ajinkya Rahane was trapped leg before wicket for 26, leaving Delhi Capitals reeling on 55-4, in the seventh over.

SunRisers kept chipping away at the wickets as none of the other batsmen could get going and Delhi collapsed to one of their biggest defeats this season. Earlier, Man of the match Saha stamped his class with a 45-ball 87 and captain Warner hit a quick-fire half-century as SunRisers went on a run-riot.

Warner (66) was devastating from the outset as Saha, playing his second game of the season, set up the base for SunRisers's huge total, the highest in Dubai this season.

Manish Pandey (44 off 31 balls) provided the final flourish in the team's must-win game. IMAGE: Wriddhiman Saha went on the attack after a cautious start. Photograph: BCCI/IPL

Sent in to bat, both Warner and Saha went after the Delhi bowlers from the start. Fully capitalising on the field restrictions, the duo smashed boundaries (11 fours and two sixes) every over to collect 77-runs in the first six overs, the best Powerplay figures of the season.

In the sixth over, Warner smashed Kagiso Rabada (0/54), the tournament's leading wicket-taker, for four boundaries and a six, helping the SunRisers get to 100 runs in just 8.4 overs.

As long as Warner was taking on the bowlers, Saha played second fiddle to perfection. The Australian celebrated his 34th birthday with a half-century off just 25 balls, hitting two sixes and eight fours. To Delhi's relief Ravichandran Ashwin (1/35) broke the 107-run opening stand in the 10th over, having danger man Warner caught at extra cover by Axar Patel.

With Warner gone, Saha hammered the Capitals bowlers all around the park. The wicketkeeper-batsman reached his fifty in style with a boundary. He plundered 12 fours and two sixes before pacer Anrich Nortje (1/37) dismissed him in the 15th over.

Pandey and Kane Williamson (11 not out) continued the assault on a listless Delhi bowling unit to take the total way past 200.