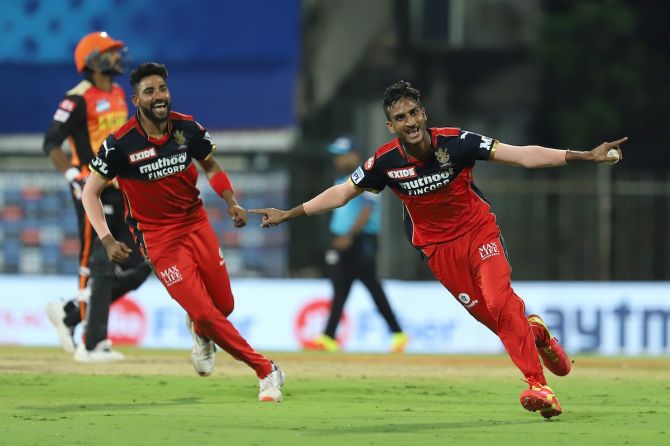 Shahbaz Ahmed claimed three wickets for seven runs in two overs to enable Royal Challengers Bangalore defend a modest total and beat SunRisers Hyderabad by six runs in the IPL match, at the MA Chidambaram Stadium in Chennai, on Wednesday.

Defending just 149, the Royal Challengers looked down and out as David Warner (54) and Manish Pandey (38) chipped away at the runs.

The pair added 83 runs for the second wicket before left-arm spinner Ahmed took the crucial wickets of Jonny Bairstow and Pandey with successive deliveries and then Abdul Samad in the 17th over to turn the match Royal Challengers Bangalore’s way.

The SunRisers choked in the last five overs, finishing with 143 for 9.

With their second straight victory, the Royal Challengers moved to the top of the league table. 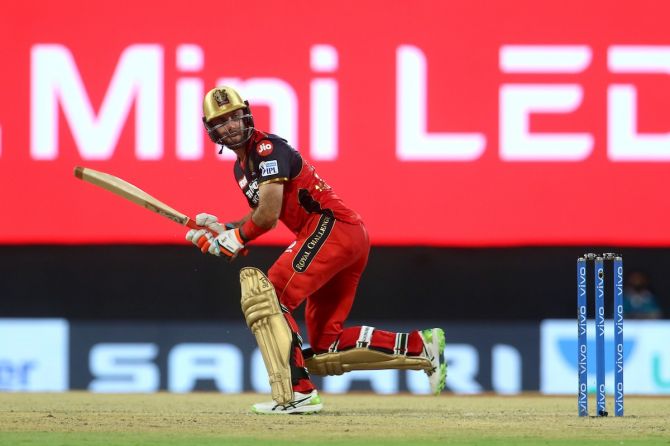 Earlier, Glenn Maxwell scored a 41-ball 59 to guide Royal Challengers Bangalore to a modest 149 for 8.

Skipper Virat Kohli (33), Shahbaz Ahmed (14) and Kyle Jamieson (12) also made valuable contributions to give the total a semblance of respectability. West Indies all-rounder Jason Holder (3-30) was the pick of the SunRisers bowlers even as Afghanistan’s ace spinner Rashid Khan excelled, claiming two wickets for 18 runs and taking a superb catch.

Devdutt Padikkal was included in Royal Challengers Bangalore's playing eleven having recovered from COVID-19 and opened with skipper Virat Kohli. 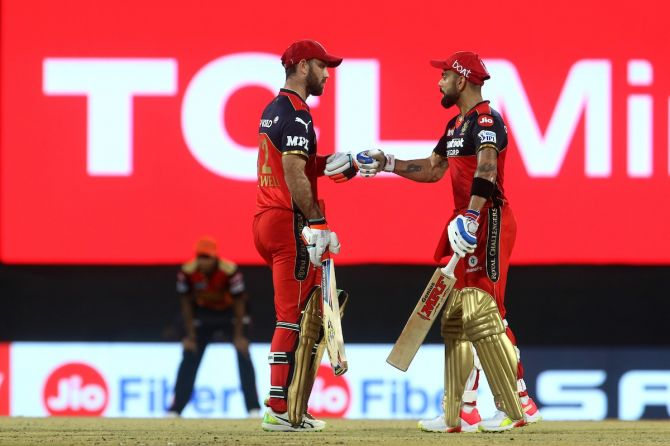 RCB, who began their campaign with a morale-boosting victory over five-time defending champions Mumbai Indians at the same venue, got off to a steady start, the openers putting up 19 runs before Padikkal was out in the third over.

He pulled one from Bhuvneshwar Kumar and Shahbaz Nadeem took the catch at mid-wicket. Padikkal out for 11. 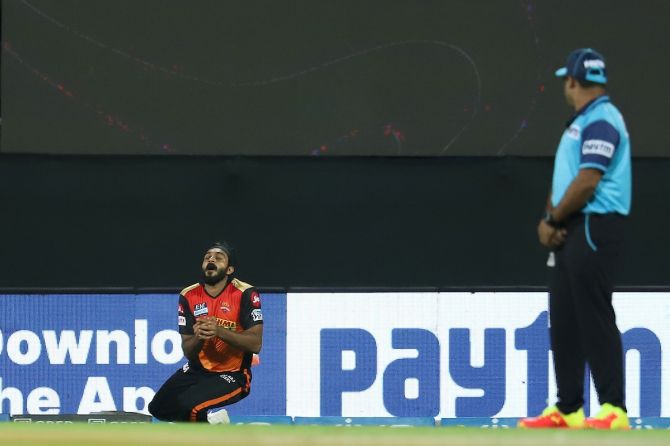 Shahbaz Ahmed, who replaced Padikkal, hit a six before making his way back.

Ahmed came down the track and attacked a delivery from Nadeem, but with no pace on the ball he was unable to get the distance as Rashid completed a good catch, running across from deep square leg.

Kohli and Maxwell steadied the innings a bit before the skipper departed. 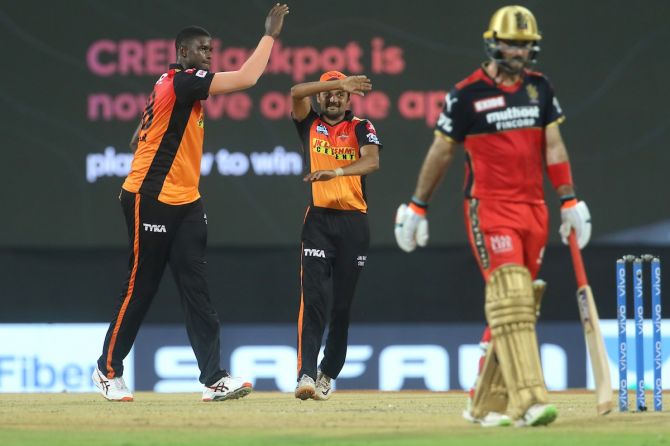 IMAGE: Jason Holder shows Virat Kohli the way back to the dressing room after dismissing him. Photograph: BCCI

Jason Holder, back in the attack, bowled a slower one, back of length. Kohli got the top edge and Vijay Shankar completed a good catch, running in from the deep.

Much was expected from AB de Villiers (1), but the South African lasted just five balls.

Rashid Khan sent down a short delivery, and, with no width on offer, de Villiers hit the ball into the waiting hands of Warner at short cover. RCB were 95-4, after 13.4 overs. 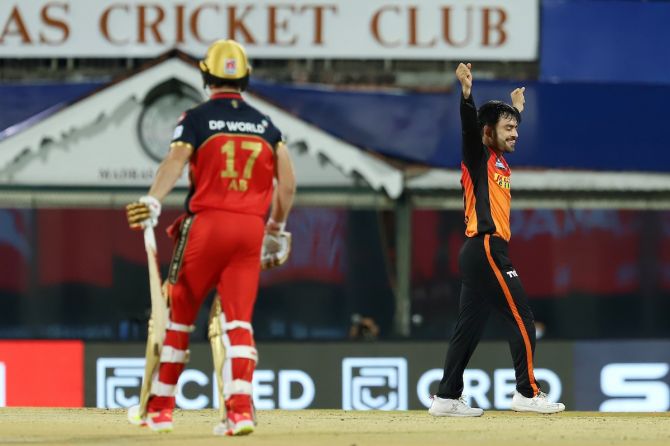 Rashid Khan struck again in his next over with the wicket of Washington Sundar, who went down on one knee and slog-swept only to be caught superbly by Manish Pandey, who took a diving catch, coming in from the deep.

New-man in Daniel Christian lasted just two deliveries, Thangarasu Natarajan having him caught behind by Wriddhiman Saha as RCB were reduced to 109 for 6 after 16.4 overs. Holder then returned to the attack and struck first ball. Kyle Jamieson tried to loft the ball for a maximum but sent it straight to long-on into the hands of Manisxh Pandey.

But Maxwell continued his lone fightback bringing up his 50, his first in five years before falling for 59 off the last ball of the innings as Royal Challengers Bangalore finished with 149-8. 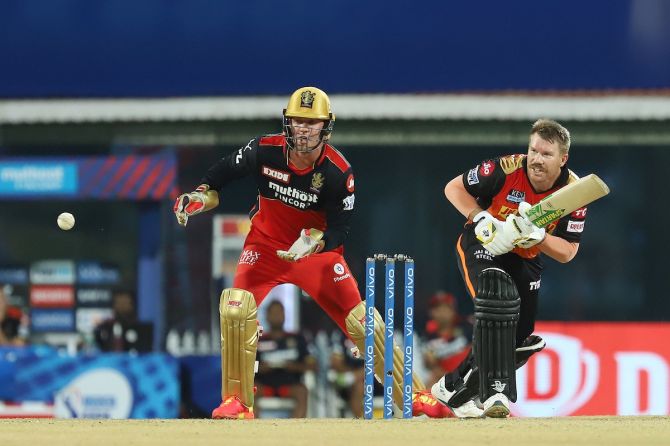 Mohammed Siraj opened the bowling for RCB while Wriddhiman Saha and Warner got SunRisers’ innings off.

Chasing a not-too-big total, SunRisers were on the backfoot early.

Siraj struck in his second over, inducing Saha to cut the delivery and send it straight to Maxwell at backward point. 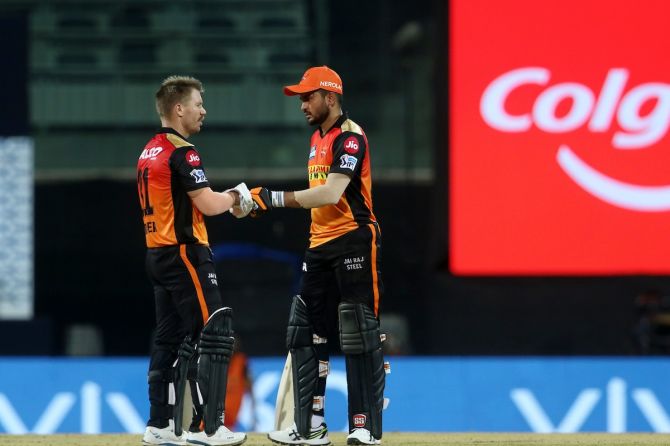 But Manish Pandey came in next and with Warner rallied the innings in an all-out assault. Warner clobbered Siraj for back-to-back fours and then a single to bring up SunRisers' 50 in the sixth over.

Rans came at a quick pace and Warner brought up his 49th IPL fifty off 31 balls in the 13th over.

However, the Australian was checked in his stride by Kyle Jamieson in the next over. 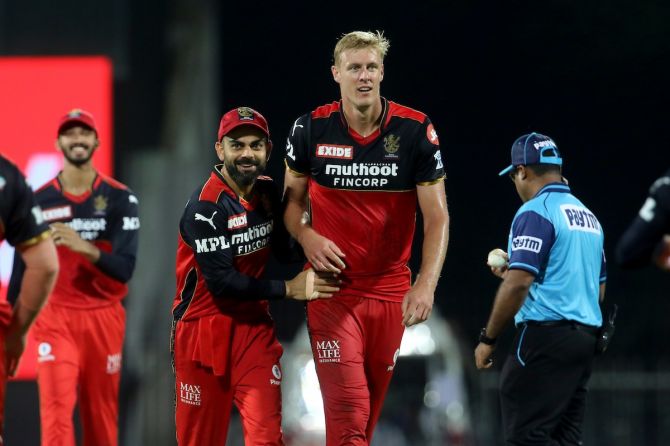 Jamieson, back into the attack, bowled a slower delivery and Warner pulls it, but straight into the hands of Christian at long-on.

Warner was out after a breezy 54 off 37 balls, which included seven fours and a six, and SunRisers 96 for 2.

Jonny Bairstow, the new-man in, got into the thick of things immediately following up a single with a four to bring up SunRisers’ hundred. 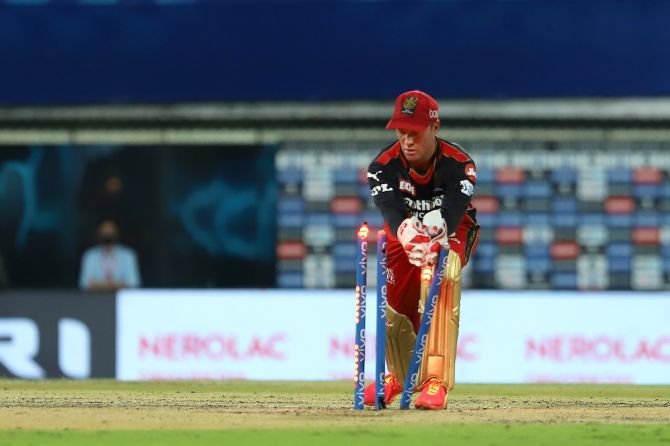 However, left-arm spinner Ahmed struck. He bowls full and Bairstow(12)  slog-sweeps, miscues and the ball goes high in the air and is safely pouched by de Villiers.

Suddenly SunRisers were struggling to stay in the contest.

Abdul Samad was the new man in, but Manish had strike. The batsman reached for the wide ball, but only managed to slash at it and was caught by Harshal at short third man.

Samad the got ambitious and went for a big shot but got a top edge and was caught and bowled by Ahmed. He was out for a duck as SRH lost three wickets in one over.

From thereon it was all over for SunRisers as Holder, Rashid and Nadeem perished cheaply. 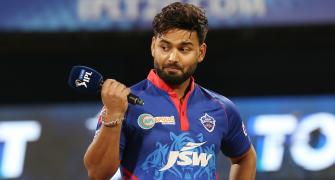 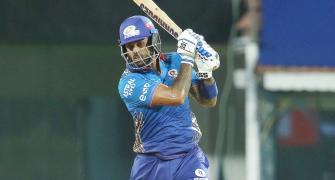 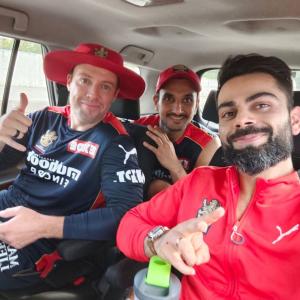 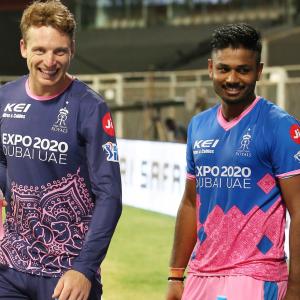