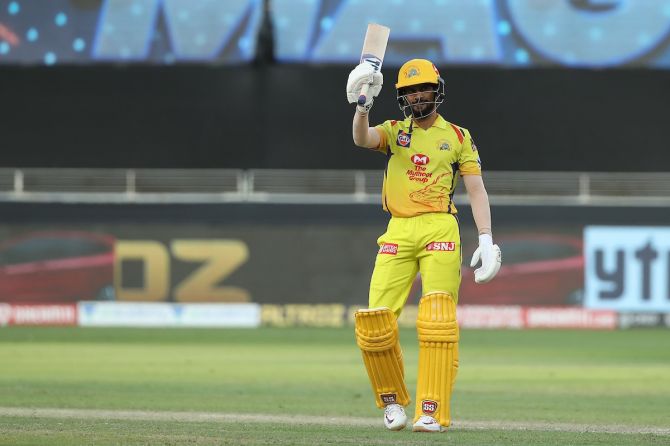 After England pacer Curran returned figures of 3 for 19 in three overs to restrict Royal Challengers to 145 for 6, Gaikwad repaid the confidence skipper Mahendra Singh Dhoni had in him at the top to score an unbeaten 60 off 51 balls as Chennai Super Kings won with eight balls to spare. 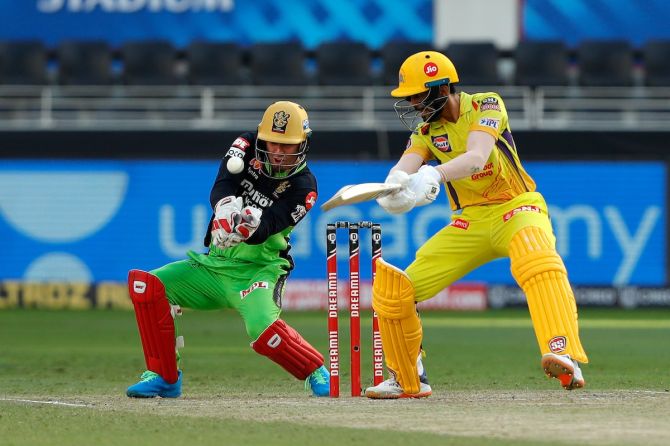 IMAGE: AB de Villiers fails to hold on to an edge from Ruturaj Gaikwad. Photograph: BCCI/IPL

The Maharashtra batsman's knock was studded with four fours and three sixes. He and veteran batsman Ambati Rayudu (39 off 27 balls) added 67 runs in 8.2 overs for the second wicket to dash whatever hopes the Royal Challengers may have entertained.

In the end, it was the Super Kings' intent that kept themselves mathematically alive in the tournament. The victory took their tally to eight points from 12 matches and lifted them from the bottom, above Rajasthan Royals, who also have eight points but 11 matches.

Royal Challengers Bangalore are in third place with 14 points from 11 outings. 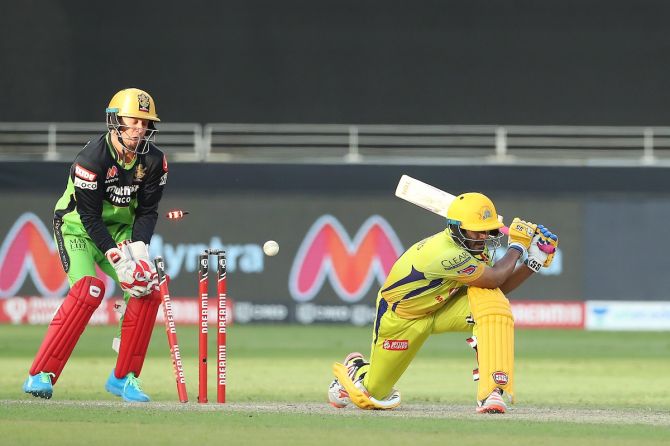 Replying to the Royal Challengers’ modest target, the Super Kings were purposeful in pursuit. Gaikwad, one of the most talked-about young players in the league, finally had a good day in office. He looked assured while choosing the loose deliveries as he swept Yuzvendra Chahal for a boundary and came down the track to loft Moeen Ali for a six.

Fittingly, it was he who hooked a six to seal a much-awaited victory for Chennai Super Kings.

Rayudu, at the other end, used Navdeep Saini's pace, as he slashed him over backward point for a six and then again showed intent by charging down the track for a boundary.

After his exit Dhoni joined Gaikwad and took upon the responsibility of finishing it off without any fuss. 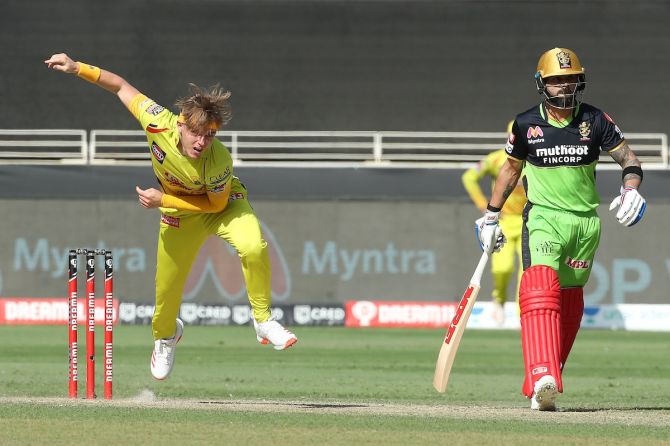 Curran was again brilliant up-front and also at the death, claiming three wickets for 19 in three overs.

Credit to the Chennai bowlers, as they conceded only 20 runs in the last three overs and took four wickets. 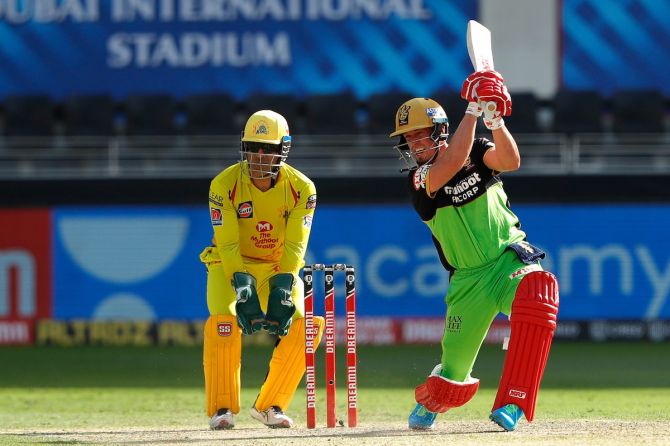 IMAGE: AB de Villiers played with caution during his 39 off 36 balls. Photograph: BCCI/IPL

The IPL's most prolific batting pair of Kohli and De Villiers added 82 runs with some good technique against Super Kings spinners Imran Tahir (1/30 in 4 overs) and Mitchell Santner (1/23 in 4 overs) who did well during the middle overs.

Deepak Chahar was also steady, finishing with 2 for 31 in his four-over spell.

Kohli scored 50 off 43 balls, including a four and six, while De Villiers helped himself to a polished 39 off 36 balls. The South African hit four boundaries. 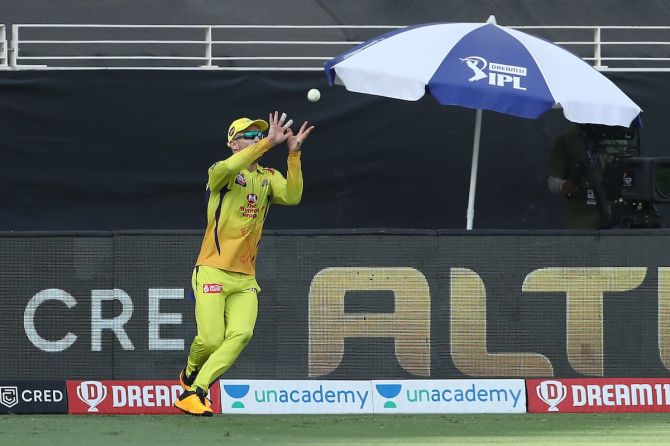 The Chennai bowlers did well enough to take the pace off the ball which made it difficult for Royal Challengers batsmen to score. Yet, Kohli and De Villiers did manage to take control of the proceedings but failed to finish with a flourish.

While Devdutt Padikkal (22 off 21 balls) and Aaron Finch (15) couldn't convert their starts, Kohli and De Villiers got together at 46 and first consolidated with their "tap and run" strategy.

However, whenever Tahir flighted the ball, his country-mate De Villiers was quick to reach to the pitch of the deliveries to drive elegantly through the covers. 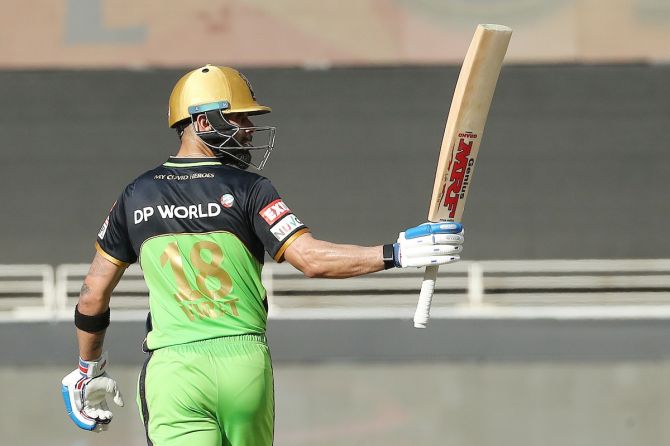 IMAGE: Virat Kohli celebrates after getting to 50. Photograph: BCCI/IPL

Kohli had one bowler's back drive off Tahir and for a good measure lifted Ravindra Jadeja for a straight maximum which was his 200th six.

His off-side play was another lesson for all youngsters as he would just adjust his wrists at the last moment to hit those inside-out shots off the spinners.

With the ball stopping and coming off the surface, Kohli never looked out of control during his third half-century of the season.

It took a tremendous diving catch at long-ff from Faf du Plessis off Sam Curran to dismiss Kohli as RCB fell short of the 150-run mark.