Images from the IPL match between Rajasthan Royals and Royal Challengers Bangalore, in Mumbai, on Thursday. Devdutt Padikkal hit a magnificent hundred as Royal Challengers Bangalore raced to a 10-wicket victory over Rajasthan Royals in the IPL match, at the Wankhede stadium in Mumbai, on Thursday.

The Karnataka batsman, who was named Emerging Player of IPL 2020, hit 6 sixes and 11 fours in an unbeaten 101 of only 52 balls as the Royal Challengers overhauled Rajasthan Royals’ 179 for 9 in only 16.3 overs.

Skipper Virat Kohli, who brought up a record 6000 IPL runs during the course of his innings, was 72 not out off 47 balls, which included 6 fours and 3 sixes.

The victory was RCB’s fourth in as many matches and took them to the top of the table, while Rajasthan Royals, after their third defeat in four matches, occupy the bottom rung in the eight-team league.

Padikkal left the great Kohli in the shade in the run-chase. 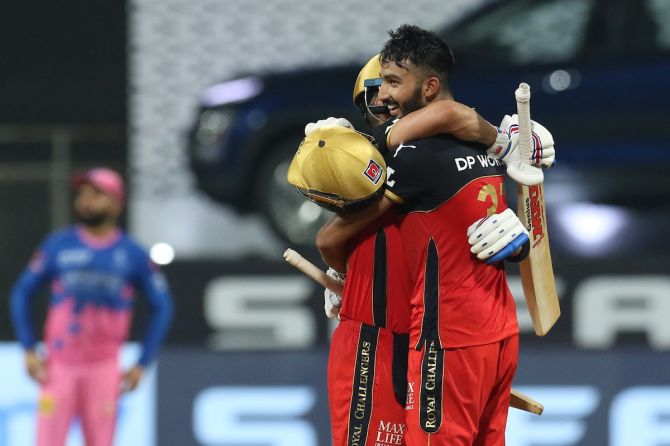 IMAGE: Devdutt Padikkal gets a hug from skipper Virat Kohli after completing his hundred. Photograph: BCCI

The skipper was forced to play second fiddle and watch the talented, young left-hander toy with the Rajasthan bowlers and fire the ball all over the ground during their unbroken opening stand of 181.

There was timing written all over the 6 sixes and 11 fours that came off Padikkal's blade.

Bangladesh pacer Mustafizur Rahaman was left in awe as the left-handed opener shaped up to execute a perfect pull-shot for a six. 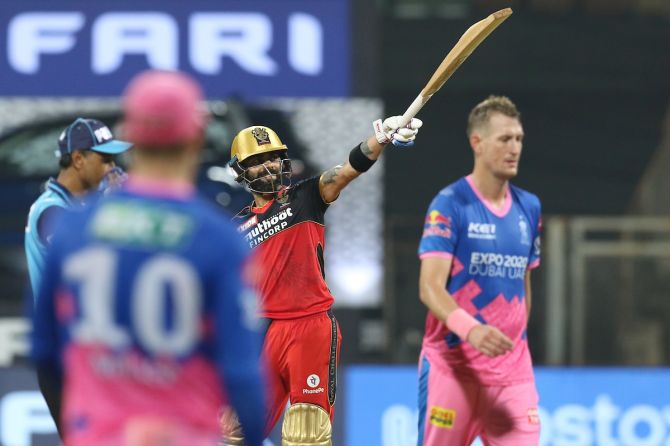 IMAGE: Virat Kohli waves to the stands after completing his 50. Photograph: BCCI

Later, as he grew in confidence, he displayed the inside-out chip to pull Riyan Parag over extra cover and complete his half-century off 27 balls.

It was only after Padikkal got into the eighties that Kohli chanced his arms, hitting a six over extra cover off Rajasthan Royals' costliest buy Chris Morris.

Kohli's 50 came off 34 balls and was followed by a personal milestone of 6000 runs in the IPL. 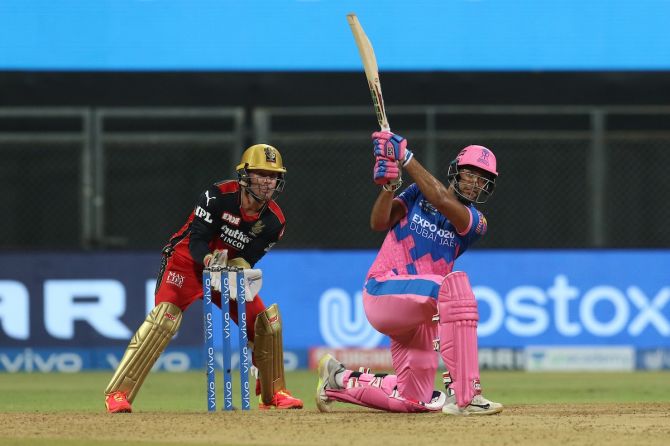 IMAGE: Shivam Dube missed out on a fifty but rallied Rajasthan Royals from a precarious position against Royal Challengers Bangalore in the IPL match, in Mumbai, on Thursday. Photograph: BCCI

Earlier, Shivam Dube and Rahul Tewatia missed out on fifties but did enough to help Rajasthan Royals post a fighting 177 for 9 after a top order collapse.

Dube scored 46 off 32 balls before Tewatia did some big-hitting in a 23-ball 40 as the Royals recovered from a precarious 43 for 4 in the eighth over to get past the 175-run mark.

Dube smashed two sixes and five fours and with Riyan Parag (25 off 15 balls) added 66 runs for the fifth wicket off only 6.2 overs.

Later, Tewatia, who came in at the fall of Parag’s wicket, and Chris Morris, who replaced Dube, put on 37 off 25 balls as the Royals finished with a flourish.

Mohammed Siraj was the pick of the RCB bowlers with figures of 3 for 27 in four overs, while Harshal Patel also got three, conceding 47 runs. 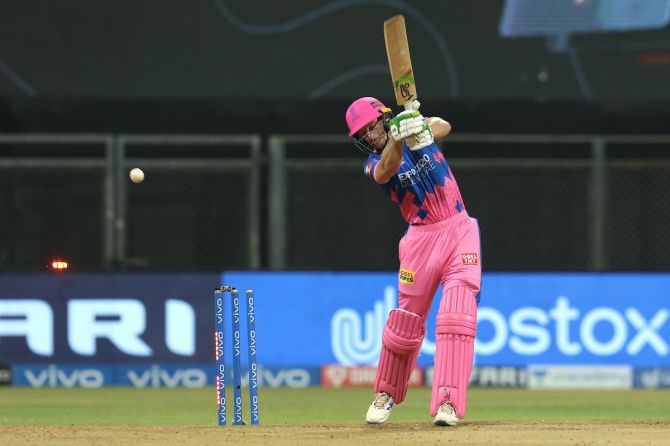 Royal Challengers Bangalore captain Kohli won the toss and elected to bowl. They brought in Jhye Richardson for Rajat Patidar, while Shreyas Gopal was in for Jaydev Unadkat in Rajasthan’s eleven.

The Royals opened with Jos Buttler and Manan Vohra, while Mohammed Siraj delivered the first over for Royal Challengers.

Buttler got the innings going, hitting Siraj for two fours in the first over, but fell to the pacer in the third over without adding to his score of 8.

Looking to hit a good length ball over the top, the England batsman failed to connect and was bowled. Rajasthan Royals were 14 for 1 after three overs. 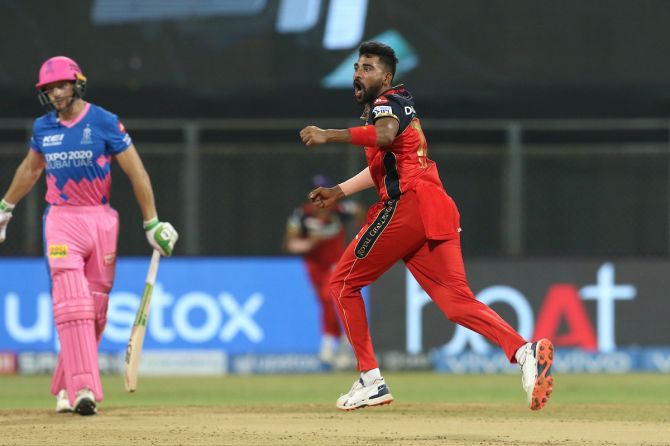 The Royal Challengers tasted success again in the fourth over when New Zealand medium pacer Kyle Jamieson dismissed Vohra with the fifth delivery of his second over.

The batsman tried to loft it down the ground, miscued and was caught by Kane Richardson at mid-on.

They continued to slump as Siraj picked his second wicket with the third delivery of his third over.

He sent down a yorker and all Miller did was get his boot before the bat. There was a huge shot for LBW, but the umpire was not interested. RCB took the review and won it. 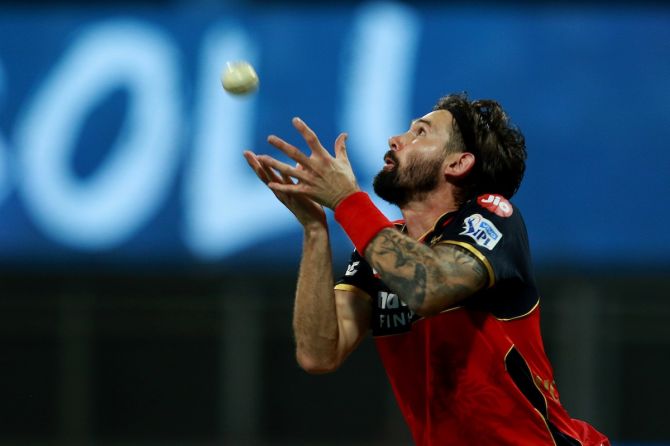 Miller was out for a duck and Rajasthan were 18-3 in the fifth over before skipper Sanju Samson rallied them, hitting two fours of Richardson in the sixth over, as they finished the powerplay on 32 for 3.

But just when it appeared that Samson would be the man to get the Royals out of the rut, RCB made a change in bowling and introduced Washington Sundar.

The off-spinner delivered with his second delivery, dismissing Samson, who had hit the bowler’s first delivery for a six. Samson gave an easy catch to Glenn Maxwell at short mid-wicket and was out for 21 off 18 balls, which included 2 fours and a six.

The Royals were reduced to 43-4 in the seventh over. 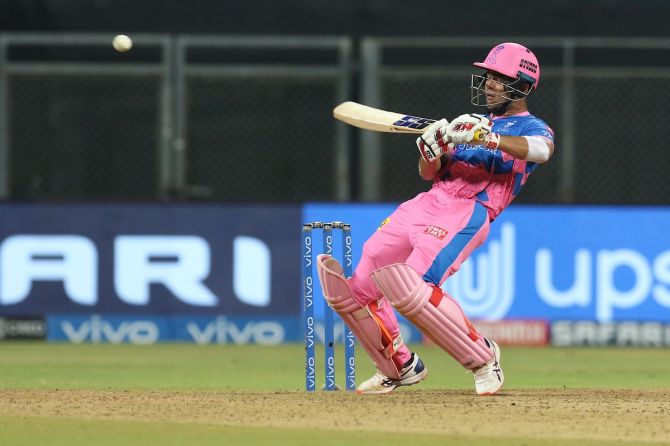 Shivam Dube, who came to the crease at the fall of Miller, threw caution to the wind in an attempt to step up the run-rate and took on the RCB bowlers. The left-hand bat took Chahal for 16 runs in the ninth over, which fetched the Royals 17 runs.

He then hammered Richardson for two fours in the 11, which fetched 11 runs, to take his individual score to 32 off 22 balls.

Riyan Parag too chipped in with a breezy 25 off 16 balls, which included 4 fours, before right-arm pacer Harshal Patel got him. He moved across to play the ball over fine leg, but got a leading edge and Chahal, at third man, took the catch.

The fifth wicket partnership between Dube and Parag yielded 66 runs off 39 balls and saw Rajasthan Royals get to 109 for 5 in the 13th over.

Dube was then dismissed by Richardson in the 16th over, four short of would would have been a well-deserved 50.

He advanced to take on the bowler, did not connect properly and Maxwell, at long-on, took a good catch. IMAGE: Rahul Tewatia hit 2 sixes and 4 fours in his 40 off 23 balls. Photograph: BCCI

Dube was out for 46 off 32 balls, which included 5 fours and 2 sixes, but, at 136-6, had done enough to enable the Royals get something on the board to defend.

Rahul Tewatia, who came in at the fall of Parag’s wicket, and Chris Morris, who replaced Dube, put on 37 off 25 balls before the former perished in the 19th over after a good cameo.

Siraj sent down a slow delivery and Tewatia launched into to it. But with hardly and pace, he was unable to get the power behind the shot and the distance and caught by Shahbaz Ahmed at deep mid-wicket.

Siraj got his third wicket for figures of 4 for 27 and Rajasthan Royals were 170 for 7.

Harshal also got his second wicket, dismissing Morris, caught by Chahal off a full toss at short fine leg. Morris scored 10 off 7 balls, including a six.

It was three wicket for Harshal when he had Chetan Sakariya caught by A B de Villiers for a duck.

Shreyas Gopal then hit Harshal for a six as Rajasthan Royals finished with a fighting 177 for 9.

Gopal was unbeaten on 7 off 4 balls with Mustafizur Rahman, who did not face a ball.