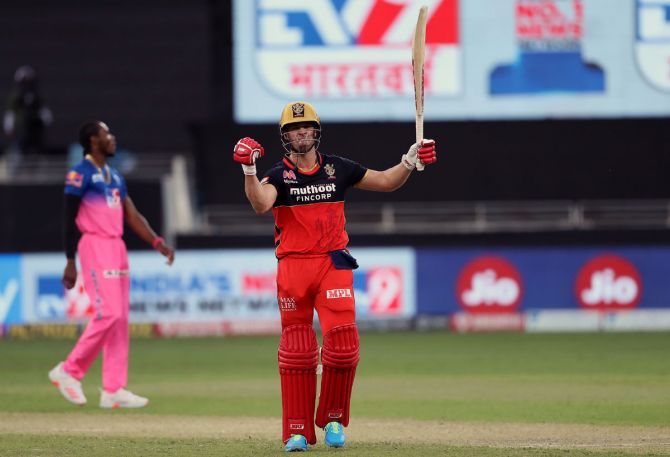 Chasing 178 for victory, De Villiers smashed six sixes as the Royal Challengers fought back when all seemed lost for them following the dismissal of Virat Kohli with the team struggling at 104 for three in the 14th over. The seasoned South African launched into Jaydev Unadkat for three successive sixes in the 19th over to swing the match his team's way. He finished the game in style, hitting Jofra Archer for a maximum with two balls still to go. Kohli and Devdutt Padikkal stitched a 79-run partnership for the second wicket but consumed too many deliveries in doing so, failing to keep pace with the required run rate.

Kohli brought the team's hundred by lofting Rahul Tewatia for a big six over long-on, but Padikkal, while trying to break the shackles after struggling his way to 35 off 37 balls, was out when his pull shot failed to clear Ben Stokes in the deep. 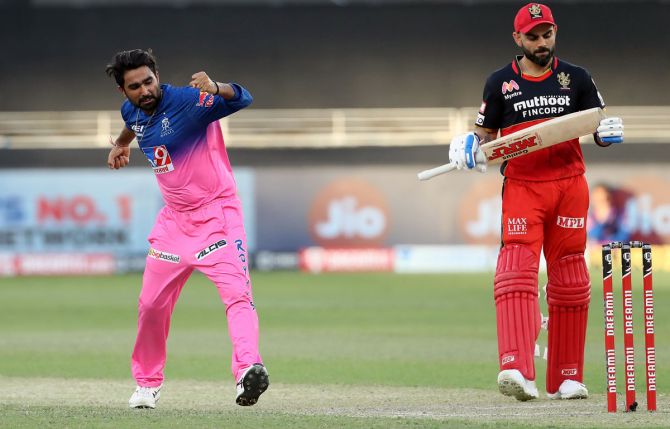 IMAGE: Rahul Tewatia celebrates after taking the wicket of Devdutt Padikkal (not in picture). Photograph: BCCI/IPL

Then came the big wicket of Kohli, thanks to a brilliant piece of fielding by Tewatia, who pulled off a catch inches from the line at deep midwicket on the rebound after the batsman whipped it off his pads.

The ball travelled at a great speed but Tewatia, coming off a wicket in his previous ball, balanced himself after nearly falling over the line to complete a fine catch.

Kohli scored 43 off 32 balls, with the help of two sixes and a four.

The required run rate rose rapidly as the Royal Challengers struggled to find the big overs, but de Villiers had other ideas. The Australian batsman struck six fours and one maximum before Chris Morris bowled a brilliant final over, conceding only four runs while taking two wickets, to prevent Rajasthan Royals from going past 180. Fast-medium bowler Morris finished with excellent figures of 4 for 26 in four overs.

Batting first, Rajasthan were off to a brisk start as opener Robin Uthappa (41 off 22 balls) launched into the Royal Challengers attack with a flurry of fours and a six.

Back in his favoured position alongside Ben Stokes after another change in the combination, Uthappa saw his team play two quiet overs before smashing Washington Sundar for four boundaries in the innings' third over. 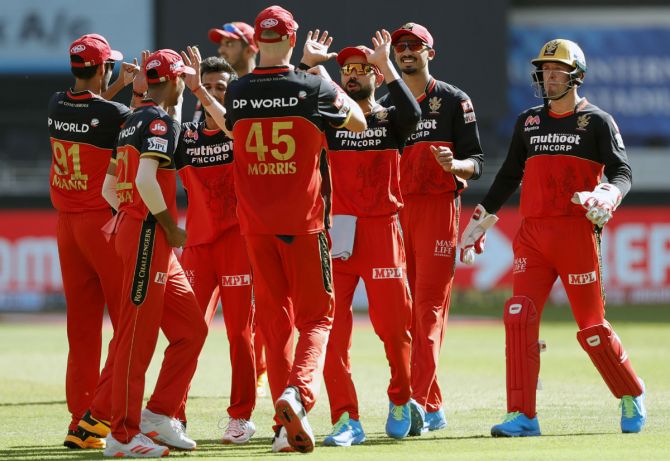 Isuru Udana was pulled and then lofted over long-on by Uthappa for the day's first maximum as Rajasthan raced to 38 without loss in four overs.

Morris gave the Royal Challengers the breakthrough when he had the subdued Stokes caught down the leg side.

Uthappa scored two more boundaries, off pacer Navdeep Saini, before his slow-sweep went into the hands of the deep mid-wicket fielder off the bowling of leg-spinner Yuzvendra Chahal. Sanju Samson got going with a six that landed into the second tier of the Dubai International Cricket Stadium. But he also fell to Chahal, taken at long-off by Morris, as Rajasthan slipped to 69 for three after a good start.

On the lookout for quick runs, Smith found an ally in Jos Buttler and the two added 55 runs while steadying the ship.

Buttler fell for a 24-ball 25 in the 16th over, but Smith continued to anchor the Rajasthan innings.

After Rajasthan scored 19 runs in the long 18th over, bowled by Chahal, Rahul Tewatia (19 off 11 balls) hit Udana for a six and four to collect 15 from the penultimate over.