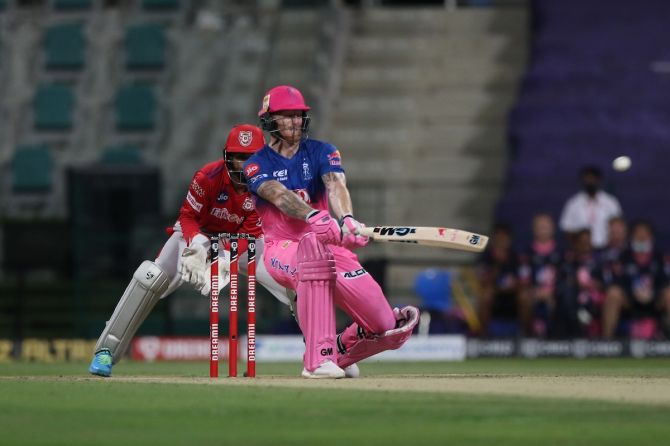 IMAGE: Rajasthan Royals all-rounder Ben Stokes sends one over the boundary during his 50 off 26 balls against Kings XI Punjab in the IPL match in Abu Dhabi on Friday. Photograph: BCCI/IPL

Star England all-rounder Ben Stokes stole the limelight from Chris Gayle as Rajasthan Royals clicked as a unit to beat Kings XI Punjab by seven wickets and stay afloat in the Indian Premier League, in Abu Dhabi, on Friday.

Stokes hit a 26-ball 50 and also claimed two wickets to emerge as the star performer for the Royals. 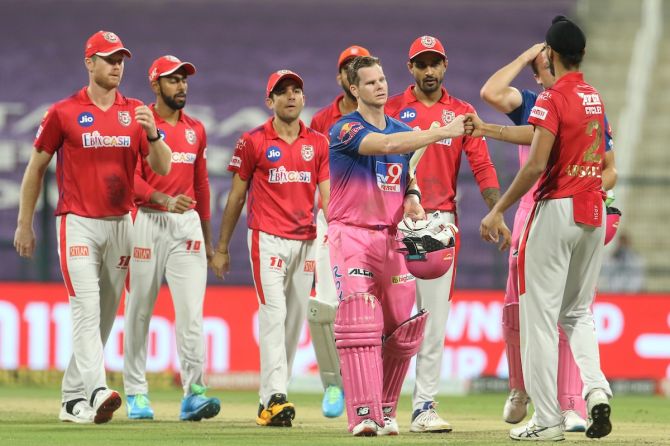 Sanju Samson was also equally impressive during his knock of 48 from 25 balls.

Opener Robin Uthappa contributed 30, while captain Steve Smith, who had been struggling for form, and Jos Buttler remained not out on 31 and 22 respectively to take the Royals home and snap Kings XI’s five-match winning streak. 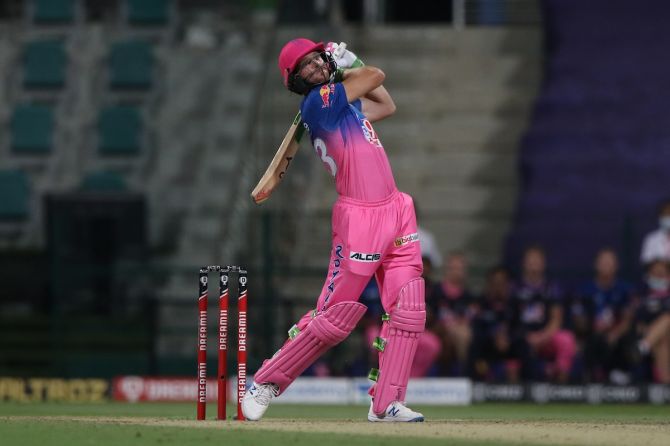 With their sixth victory in 13 matches, the Royals kept themselves alive for a spot in the play-offs with 12 points and one game left.

Despite the defeat, Kings XI remain in contention with 12 points from 13 matches.

Rajasthan Royals made an explosive start to their run-chase as Stokes and Uthappa put up 60 runs inside powerplay. Stokes was in magnificent form during his short innings, finding the boundary easily. 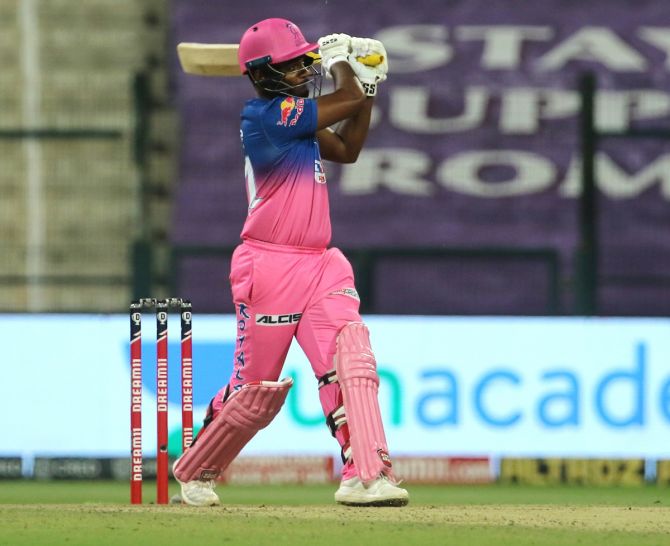 IMAGE: Sanju Samson hits one to the boundary. Photograph: BCCI/IPL

The star England all-rounder hit Murugan Ashwin for two sixes and a four to take 16 runs from the fourth over. He reached his fifty off 24 balls when he hoisted Chris Jordan for a six in the sixth over.

But Jordan got his revenge by removing Stokes two balls later.

Rajasthan were still cruising at 66 for 1 at the end of the powerplay, and with Samson firing on all cylinders, they went past the 100-run mark in the 10th over.

The fireworks were halted after Uthappa fell in the 11th over to Ashwin, but Rajasthan were in complete control with the asking rate less than seven runs an over with seven wickets in hand.

Smith and Buttler kept cool after Samson’s exit to ensure a thumping victory. 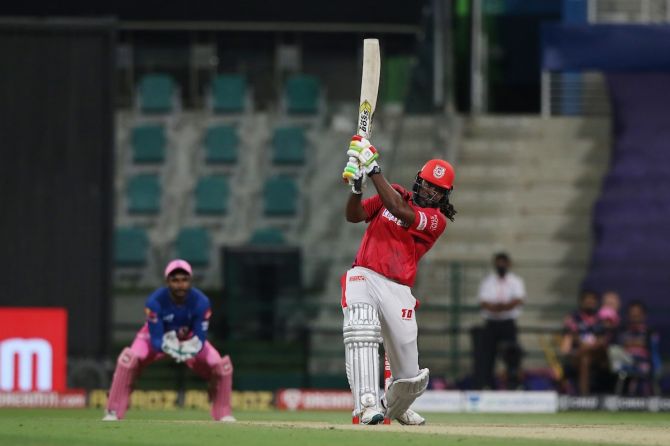 Earlier, Gayle continued his menacing form, smashing a 63-ball 99, to steer Kings XI Punjab to 185 for 4.

Gayle and captain KL Rahul (46) took the Rajasthan Royals bowlers to the cleaners, stitching 120 runs for the second wicket in 13.4 overs, to help Kings XI post a challenging total after being put in to bat.

Nicholas Pooran played a late cameo of 22 off just 10 deliveries with the help of three sixes. 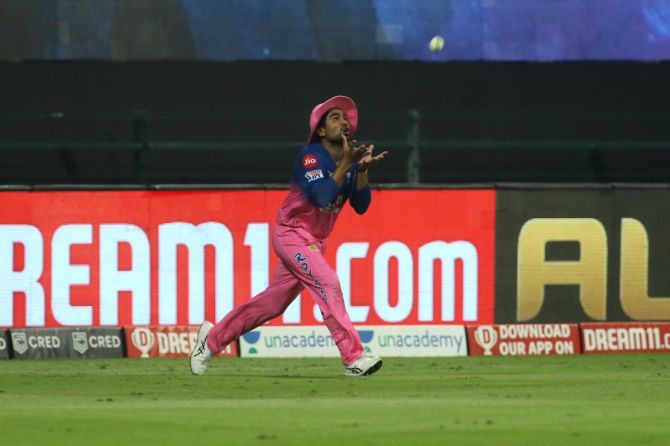 Gayle, who had four boundaries and eight sixes in his explosive innings, was out just two balls before the end of the innings and he showed his disappointment of missing out on a hundred by throwing down his bat.

During his knock, the West Indian ace took his tally of sixes to 1001 in his glittering T20 career. 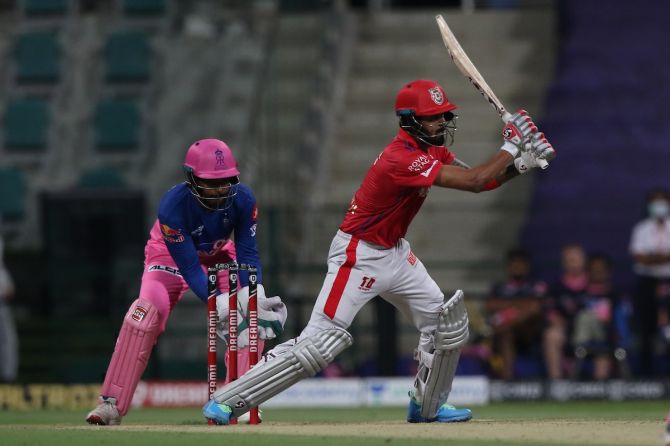 Kings XI lost their first wicket in the opening over itself when Mandeep Singh was dismissed for a first-ball duck, with Ben Stokes taking a brilliant diving catch off an equally superb delivery by Jofra Archer.

But Gayle and Rahul maintained a high scoring rate, putting up 53 for 1 at the end of powerplay. 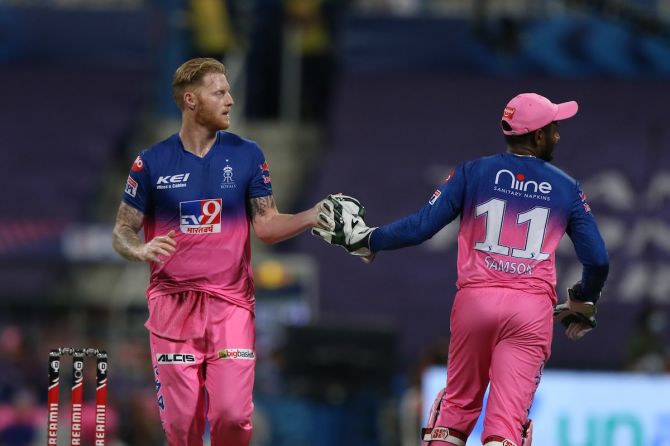 Gayle registered his third fifty in six matches in this IPL in style, hitting a six off Rahul Tewati in the 11th over as Kings XI cruised along to reach the 100-run mark in the 13th over.

Stokes finally got the breakthrough by getting rid of the tournament's top run-getter Rahul in the 15th over to put brakes on the Kings innings.

Rahul, who played second fiddle to Gayle, could not clear the ropes as Tewatia caught him near the boundary.

Pooran then hit three sixes during his 10-balls stay, which fetched him 22 runs, to boost Kings total. 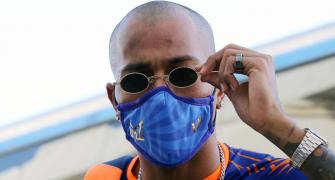 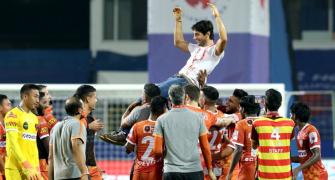