Images from the Indian Premier League match between Delhi Capitals and Kolkata Knight Riders, in Sharjah, on Tuesday. 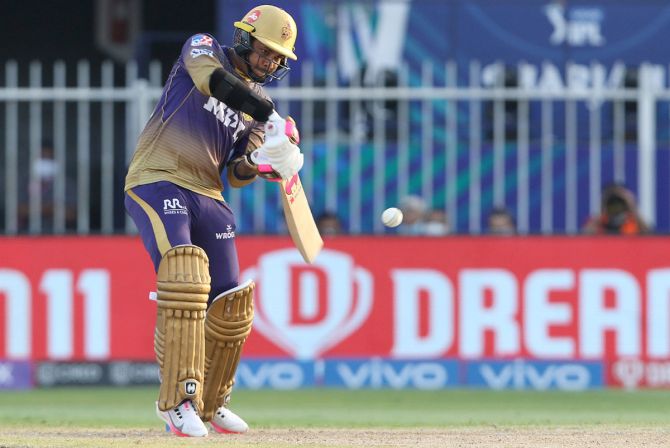 Sunil Narine turned in a superb all-round show as Kolkata Knight Riders outclassed Delhi Capitals by three wickets to boost their hopes of making it to the Indian Premier League play-offs, in Sharjah, on Tuesday.

The West Indian all-rounder took two wickets for 18 runs before scoring a decisive 21 from 10 balls in the closing stages to earn the Knight Riders their fifth victory from 11 games. 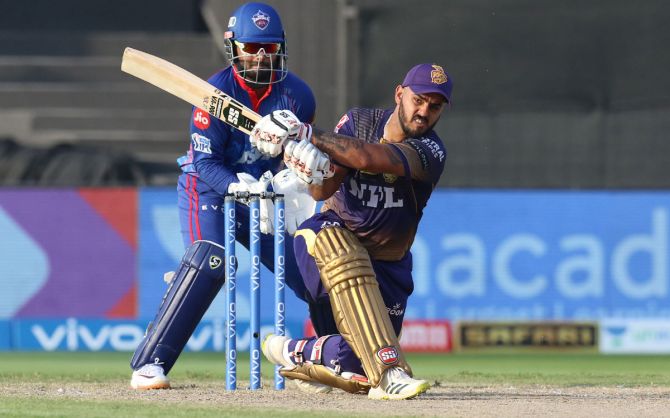 IMAGE: Nitish Rana hit 36 off 27 balls, including two fours and as many sixes, to take KKR home. Photograph: BCCI

Nitish Rana kept his composure in a pressure situation in the closing stages to guide KKR home with an unbeaten 36 from 27 balls, but it was Narine's assault against Kagiso Rabada that turned the game on its head. 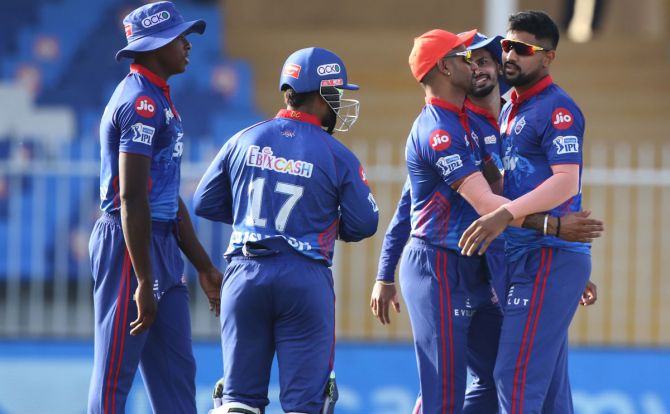 The match was evenly poised, with 30 needed from five overs for victory and five wickets in hand, before Narine changed the course of the innings.

He hit the Delhi Capitals fast bowler for two sixes and a four in the 15th over. 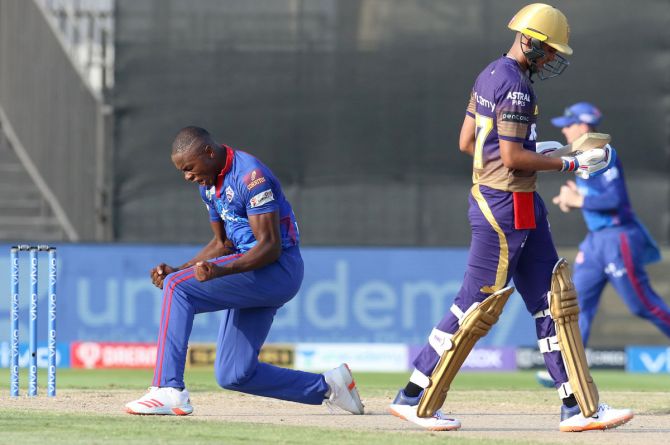 The defeat should be a nice wake-up call for Delhi Capital, who remain second in the eight-team league table with 16 points while the Knight Riders consolidated their place in fourth spot with 10 points.

On a re-laid Sharjah track which saw runs hard to come by, Delhi looked set for another easy victory till the 13th over with Kolkata struggling at 76 for 4.

However, Rishabh Pant, by then, exhausted Ravichandran Ashwin's (1 for 24 in four overs) quota of overs and had to rely on Lalit Yadav's fast off-breaks. 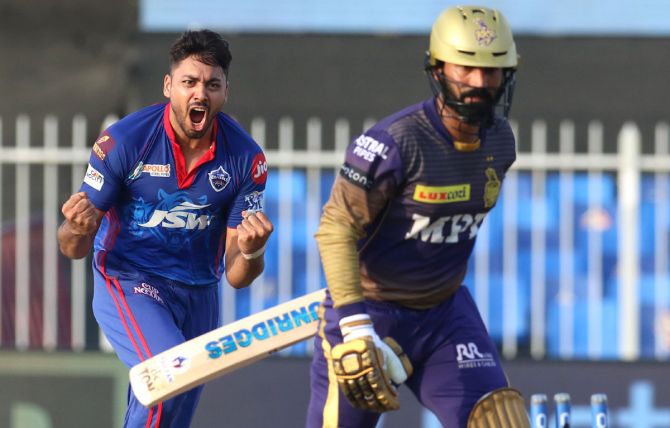 Rana used the long handle, hammering two huge sixes, as 20 came off the inexperienced Yadav in the 14th over.

In the 16th over, it was Narine who launched into Rabada and got 21 runs to put Kolkata in the driver's seat.

Despite some late jitters, Rana, with a slashed boundary off Anrich Nortje, finished the match in style. 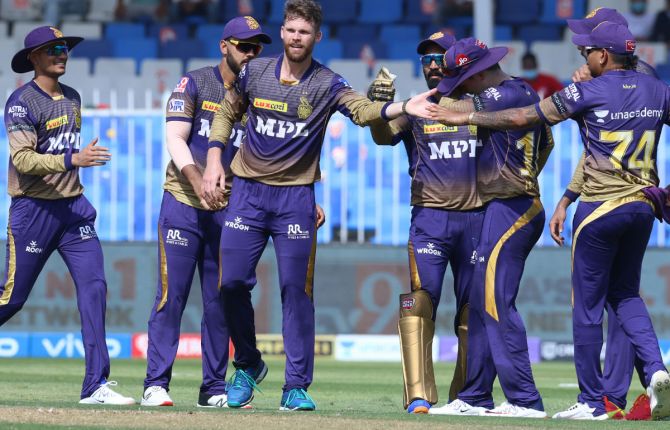 Earlier, Kolkata Knight Riders’ bowlers made optimum use of a slow Sharjah track to restrict Delhi Capitals to 127 for 9.

The bowlers justified skipper Eoin Morgan's decision to put Delhi in to bat on a track where the ball was stopping and coming onto the bat.

Only Steve Smith (39 off 34 balls) and skipper Rishabh Pant (39 off 36 balls) could cross the 30-run mark, as run-scoring was a difficult task. Not a single six was hit during the entire Delhi innings. 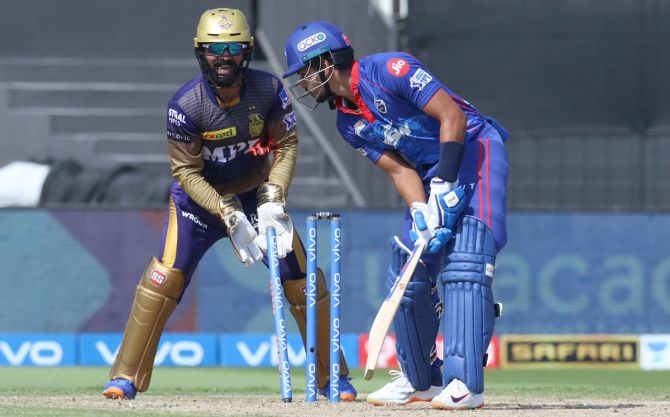 Delhi Capitals opener Shikhar Dhawan (24 off 20 balls) hit five boundaries in quick time, converting a lot of deliveries into half volleys, before Venkatesh Iyer pouched him at point off Lockie Ferguson. 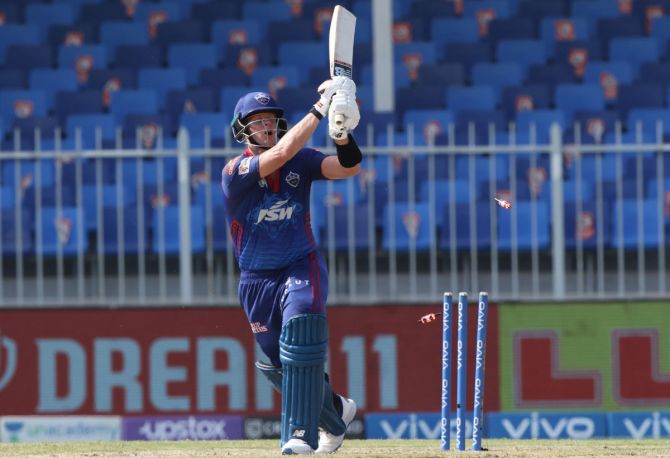 Pant then joined Smith, and the pair found scoring difficult as there was no pace off the track and the deliveries did not really come on to the bat. 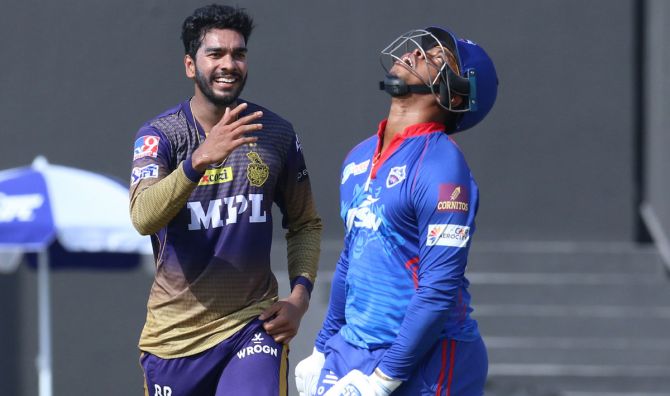 Smith tried changing gears and hammered successive fours in the 10th over off Chakravarthy, as Delhi got 12 off that over.

The Australian then slog-swept Narine and was looking in his element when Ferguson pegged back Delhi by castling the Australian. That saw them slip to 77 for 3. 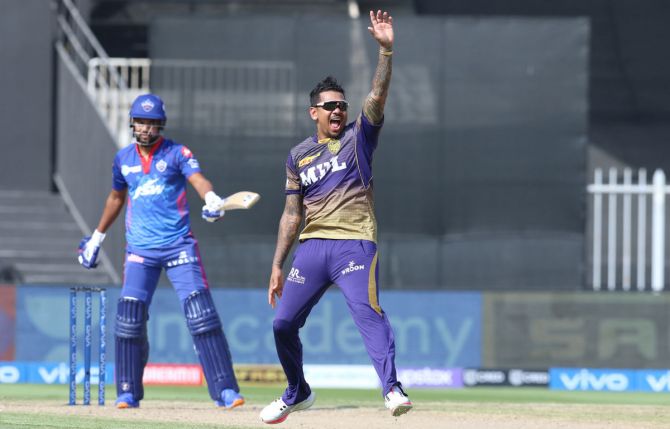 Kolkata then went on to snare three quick wickets, as Shimron Hetmyer (4), Lalit Yadav (0), who was trapped in front by Narine, and Axar Patel (0) perished cheaply and Delhi was teetering at 92 for 6. 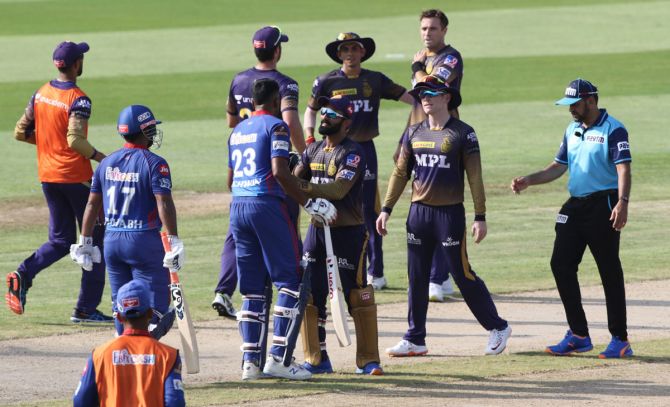 IMAGE: Ravichandran Ashwin gets into an argument with Tim Southee during the Delhi Capitals innings. Photograph: BCCI

With Pant failing to up the ante, Venkatesh (2 for 29) bowled really well in the back-10, mixing it up nicely at a speed of almost 130 kmph. Iyer’s showing is certain to keep Hardik Pandya on tenterhooks in coming days. 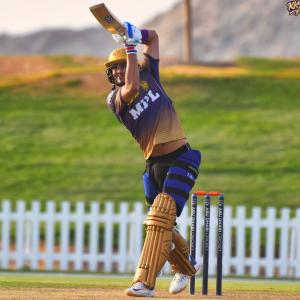 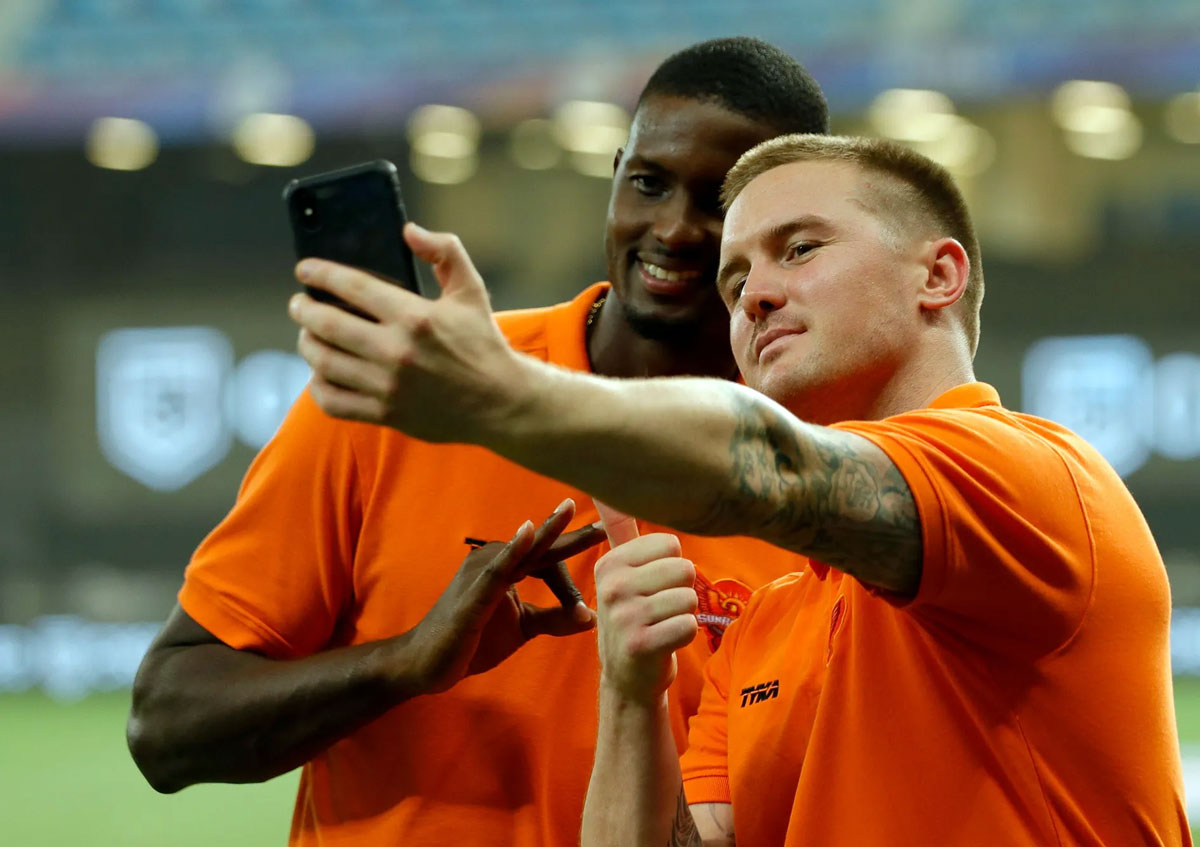