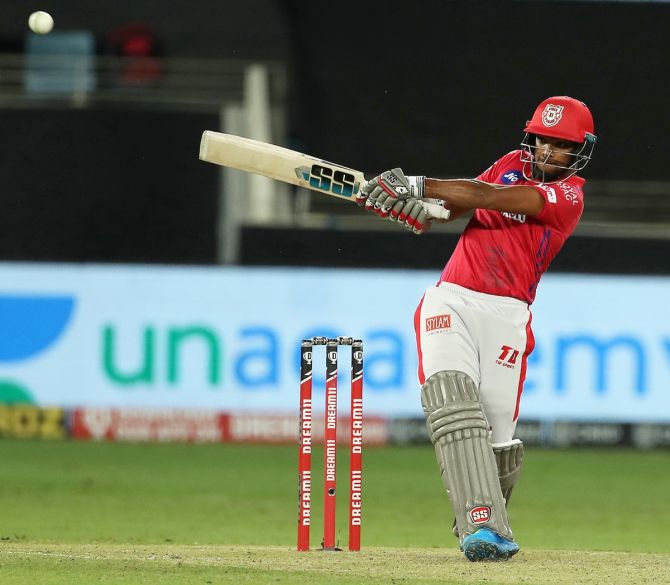 IMAGE: Kings XI batsman Nicholas Pooran blazes away during his 53 off 28 balls in the IPL match against Delhi Capitals in Dubai on Tuesday. Photograph: BCCI/IPL

Shikhar Dhawan’s second straight century in this Indian Premier League season was in vain as Kings XI beat Delhi Capitals by five wickets, in Dubai on Tuesday, to stay in contention for a berth in the play-offs.

Batting first after winning the toss, opener Dhawan's hundred powered Delhi Capitals to 164 for 5, but gritty batting by Nicholas Pooran and Glenn Maxwell in Kings XI's middle order, and James Neesham and Deepak Hooda (15 off 22) in the death overs, put paid to Delhi’s hopes. 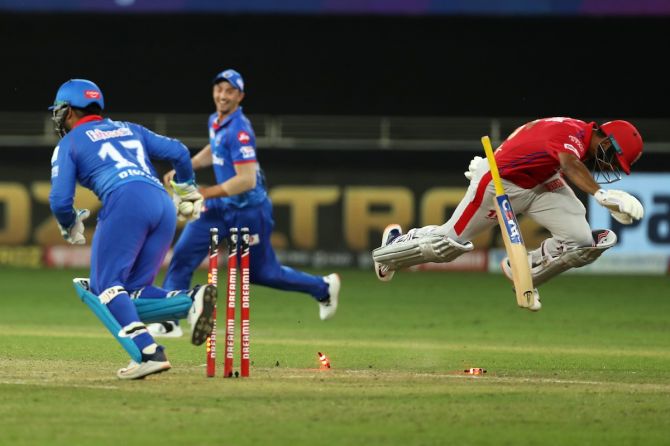 Pooran hammered 53 off 28 balls and Maxwell 32 off 24, before Jimmy Neesham (10 not out off eight) hit the winning six as Kings XI won with an over to spare.

The victory took Kings XI to fifth in the eight-team league, with eight points from 10 matches, while Delhi, who suffered only their third defeat, stay atop the league with 14 points from ten outings.

Earlier, Dhawann became the first batsman to hit back-to-back IPL hundreds with an unbeaten 106 off 61 balls. He was the sole bright spot in Delhi's innings. 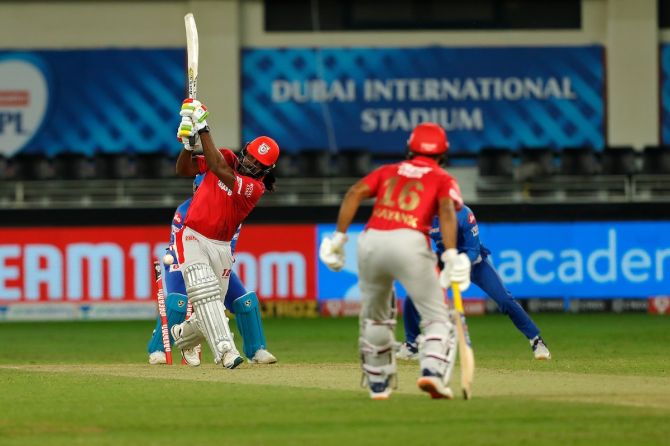 For a change, it ended up being a straightforward chase for Kings XI despite a rare failure by their opening pair of K L Rahul (15) and Mayank Agarwal (5), who had done the bulk of the scoring for the team in earlier games.

Pooran came up with another blinder of a knock, hitting three sixes and six fours, just when it was needed and Maxwell finally found form to rally the side after they were reeling at 56 for 3 in the sixth over.

With Kings XI’s in-form top three gone cheaply, it was a stiff test for their shaky middle-order, but their batsmen stayed calm in the chase and came good on the night.

Rahul mishit one to mid-on while Agarwal was run-out after a huge mix-up with Pooran. 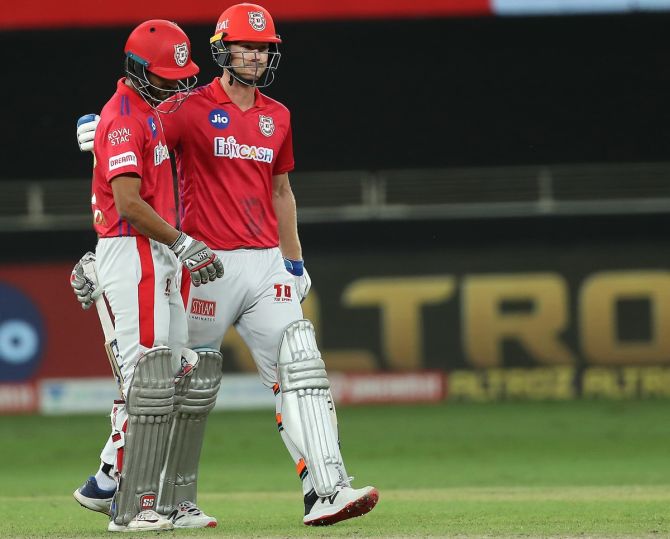 Chris Gayle (29 off 13 balls) looked in ominous touch but departed soon after hammering Tushar Deshpande in his opening over that went for 26 runs.

Ravichandran Ashwin found the Jamaican's stumps with a slider.

At 56 for 3 inside the powerplay, it was left to Pooran and Maxwell to bail the team out.

Pooran eased the pressure with another display of clean hitting. His blitzkrieg propelled Kings to 101 for three in first 10 overs, with only 64 to get from the last 60 balls.

However, the West Indian was unable to see the team through and it was left to Maxwell to finally get some runs under his belt to take the team close to victory.

Neesham and Hooda then held their nerve to complete the formalities. 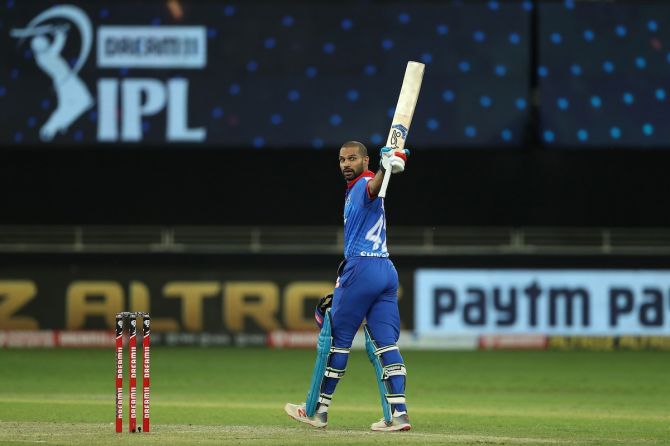 The India opener, who scored an unbeaten 101 off 58 delivers against Chennai Super Kings in the previous match, continued his rich vein of form to finish unbeaten on 106 off 61 deliveries, which included 12 fours and three sixes.

In the process he became the first batsman to score back-to-back IPL hundreds. Electing to bat, the Capitals lost Prithvi Shaw (7), the other opener, in the fourth over, but the dismissal hardly mattered, as Dhawan got into his stride.

It seemed he was batting on a different surface as he blazed away. The other main contributors to Delhi’s total were skipper Shreyas Iyer and Rishabh Pant, who scored 14 each.

The Kings bowled well at the back-end of the innings to restrict Delhi to below 180, lead pacer Mohammed Shami (2/28) being their stand out performer.

Fresh from the hundred in the last game, Dhawan began by slog-sweeping offie Glenn Maxwell in the opening over.

Shaw, who failed to get off the mark in the preview two games, perished cheaply once again, trying to smash Jimmy Neesham over extra cover when he was in no position to play the aerial stroke.

Iyer too did not last long after getting off the mark with a lofted cover drive that went for a six and Delhi were 83 for 2 in 10 overs. 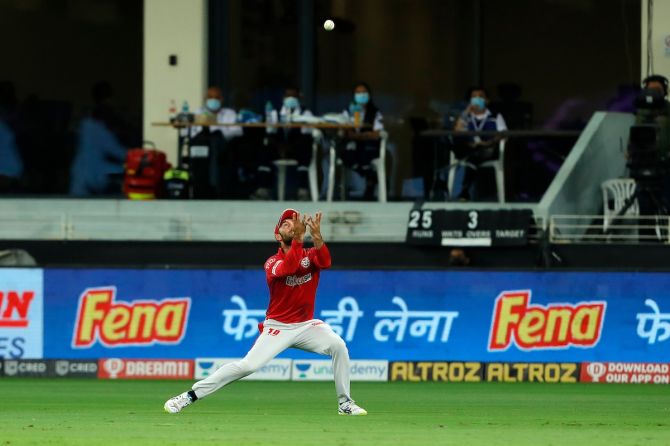 IMAGE: Glenn Maxwell gets under the ball to catch Prithvi Shaw off the bowling of James Neesham. Photograph: BCCI/IPL

At the other end, Dhawan grew in confidence and an example of that was the way he drove a full ball from Shami over mid-off.

The southpaw crossed the 5000-run mark in the IPL by sweeping leggie Ravi Bishnoi for a six over deep square-leg, becoming the fifth batsmen to do so in the tournament's history.

He got to his century, another landmark, with a double off left-arm pacer Arshdeep Singh. However, he did not get the required support from the other end as Delhi ended with a below-par total.

Delhi made three changes, bringing back a fit again Pant and Shimron Hetmyer, who made way for wicketkeeper Alex Carey in the former's absence.

Kings XI surprisingly replaced Chris Jordan with Neesham after the Englishman had a decent outing in the previous game against Mumbai Indians.