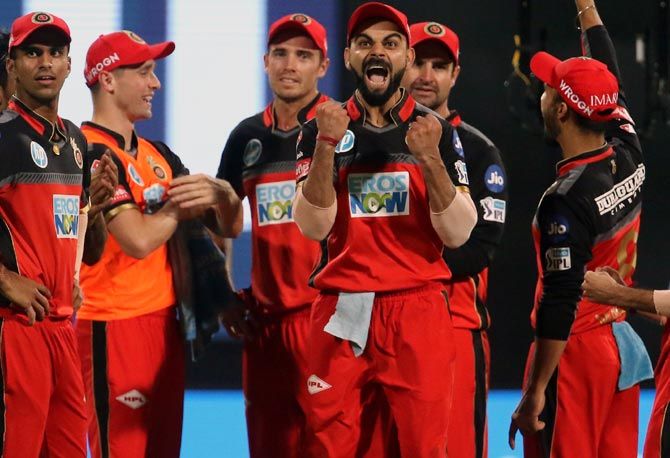 Royal Challengers Bangalore pacers blew away the Mumbai Indians' top order before shining in the death overs to set up a much-needed 14-run win, which kept them alive in the Indian Premier League Play-offs race, in Bengaluru, on Tuesday.

Mumbai Indians bowlers had also exploited a difficult batting track but leaked a few runs towards to end to allow the hosts post 167 for seven, which proved to be a fighting total under challenging conditions.

Captain Virat Kohli (32) and Brendon McCullum (37) added 60 quick runs in the middle overs to help RCB recover from a slow start and Colin de Grandhomme (23 from 10) hit three sixes in the last over, bowled by fellow New Zealander Mitchell McClenaghan, to provide a flourishing finish to the RCB innings. 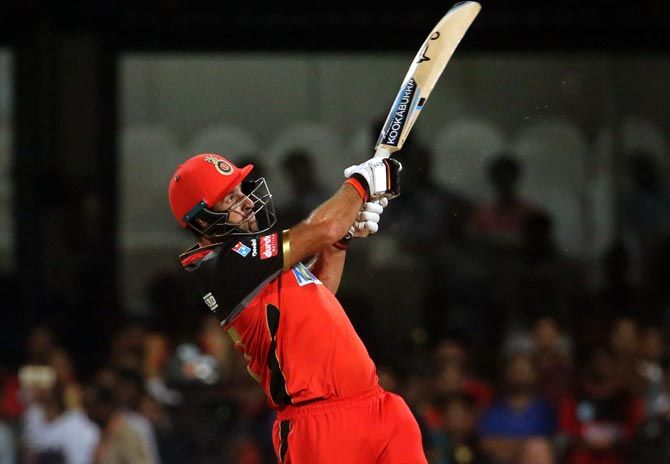 MI all-rounder Hardik Pandya (3/28) scalped three batsmen and effected a run out to stop the hosts from running away with a big total but it proved enough in the end as all Mumbai Indians managed was 153 for seven.

With this win, RCB moved to fifth place in the table with six points ahead of Rajasthan Royals while Mumbai are seventh with just four points from eight matches.

The RCB bowlers, especially Umesh Yadav, came up with an hostile spell upfront to peg Mumbai Indians back while Tim Southee (2/25) and Mohammed Siraj (2/28) delivered the goods in the death overs. 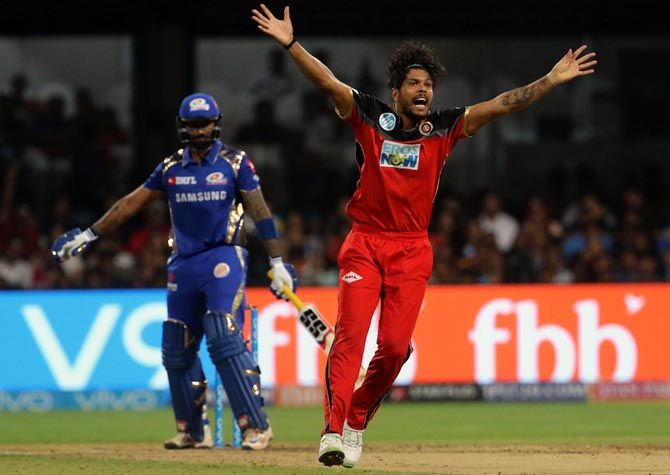 The visitors' chase suffered a huge setback as they lost three wickets inside four overs. Southee got rid of Ishan Kishan (0) before Umesh scalped Suryakumar Yadav (9) and rival captain Rohit Sharma (0) off successive balls, in the fourth over.

After trapping Suryakumar leg before wicket, Umesh produced a gem of a ball, getting extra bounce and movement, taking the edge with the wicketkeeper Quinton de Kock taking a sensational diving catch to his left, which was confirmed after RCB took the DRS.

Kieron Pollard (13) and JP Duminy (23) had an onerous task at hand but Siraj had the West Indian caught behind, leaving Mumbai Indians reeling at 47 for four.

Pandya brothers -- Hardik and Krunal -- kept Mumbai in the hunt with some smart batting, running hard between the wickets to keep the scoreboard moving.

Krunal hit de Grandhomme for a massive six before Hardik found two boundaries to take 17 runs from the 16th over.

The visitors needed 45 from the last four but Southee bowled exceptionally well as he conceded just five runs in the 18th over.

Siraj then dealt Mumbai's hopes a big blow as he dismissed Krunal (23), who was caught at point, to end his 56-run partnership with Hardik. 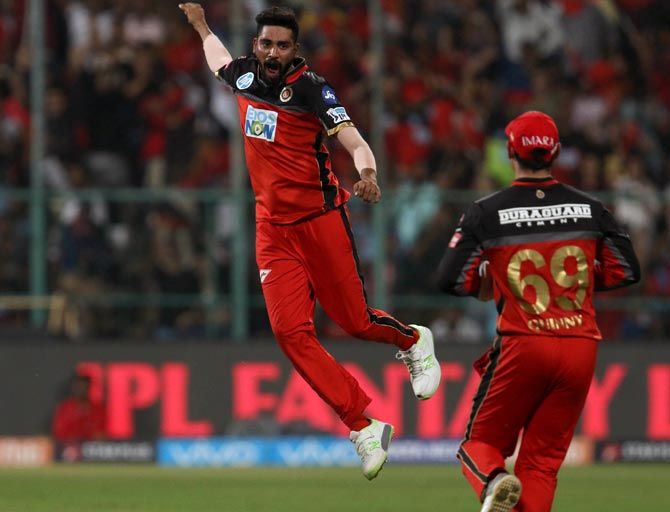 Southee struck in the next over, with the key wicket of Hardik, with Kohli taking a superb low catch diving forward to long-on which proved to be the killer blow for the visitors.

Captain Virat Kohli (32) and Brendon McCullum (37) added 60 quick runs in the middle overs to help the side recover from a slow start but Hardik Pandya (3/28) scalped three batsmen and effected a run out to stop the hosts from running away with a big total.

Colin de Grandhomme's late assault, which included three sixes off the final over bowled by fellow New Zealander Mitchell McClenaghan, was a timely boost for the hosts. He finished unbeaten quickfire 23 from 10 balls. 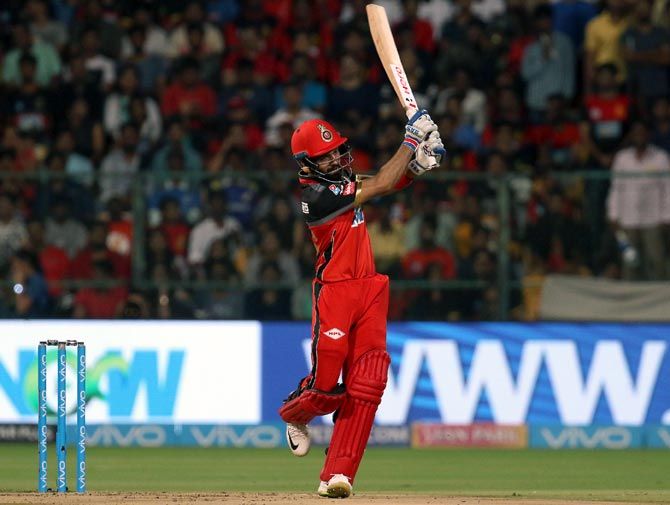 Opener Manan Vohra (45) played a useful knock at the top before being trapped leg before wicket by Mayank Markande as he attempted the sweep.

As the wicket offered turned and pacers too generated pace, Mumbai Indians succeeded in keeping the RCB batsmen tied down in the early overs.

Vohra broke the shackles by creaming off 22 runs from South African all-rounder JP Duminy's second over.

McClenaghan, though, kept troubling Quinton de Kock (7) , who struggled badly to connect the bat with the ball and was eventually caught brilliantly by Rohit Sharma at midwicket off the Kiwi paceman. 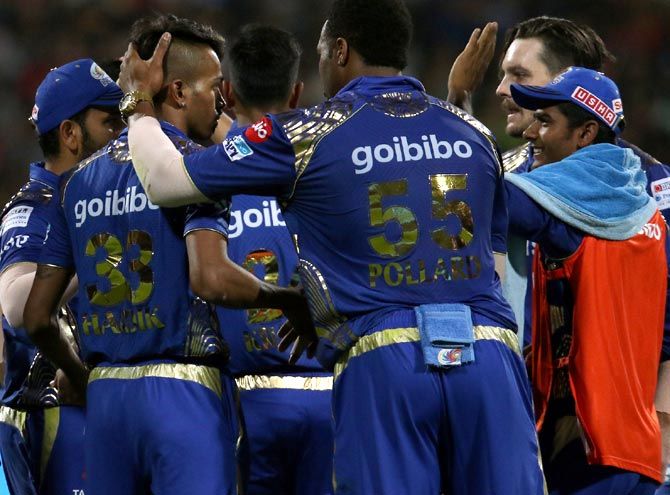 Brendon McCullum came in at No. 3, while Virat Kohli batted at No. 4 to bolster the middle order in the absence of AB de Villiers, who missed out once again after failing to recover from his illness.

RCB got the momentum back as they hit 20 runs from the 10th over, bowled by Hardik with McCullum hitting him for two sixes and a four.

Runs began to flow with both Kohli, who launched Markande for a huge six, and McCullum going on the attack in the middle overs.

Hardik made the breakthrough when he got McCullum run out for 37 with a direct hit from the overs, ending the 60-run partnership for the third wicket.

Pandya then caused a mini collapse, dismissing Mandeep Singh (14), who looked in good touch, Kohli and Washington Sundar (1) in the 18th over.

However, de Grandhomme changed the script with his big-hitting in the final over. He swung McClenaghan twice for a couple of sixes over midwicket, including one off a free hit delivery, while he finished the innings in grand style, blasting the last ball down the ground, over the long-off for the third six of the over, which went for 24 runs.