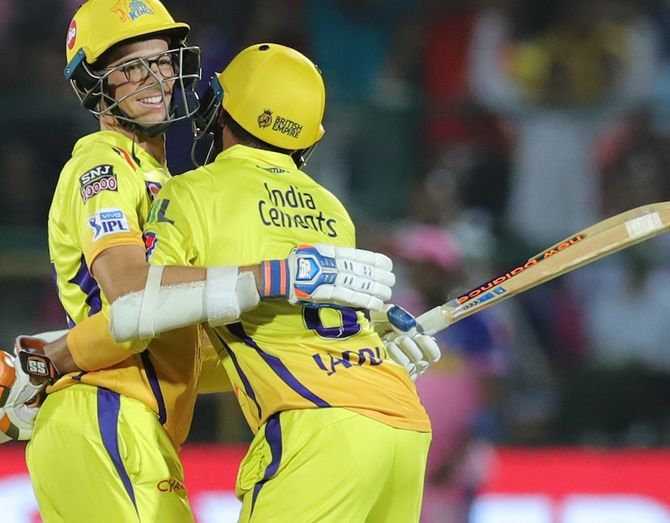 Bespectacled Mitchell Santner smashed Ben Stokes into the stands off the final delivery to give Chennai Super Kings a thrilling four-wicket victory over Rajasthan Royals in Thursday’s IPL match in Jaipur.

Chennai’s sixth victory in seven games was achieved after high drama and a public outburst from winning captain Mahendra Singh Dhoni, as they made a rough weather of a modest 152-run target before Santner's six sealed the issue in a dramatic final over in which CSK needed 18 runs. 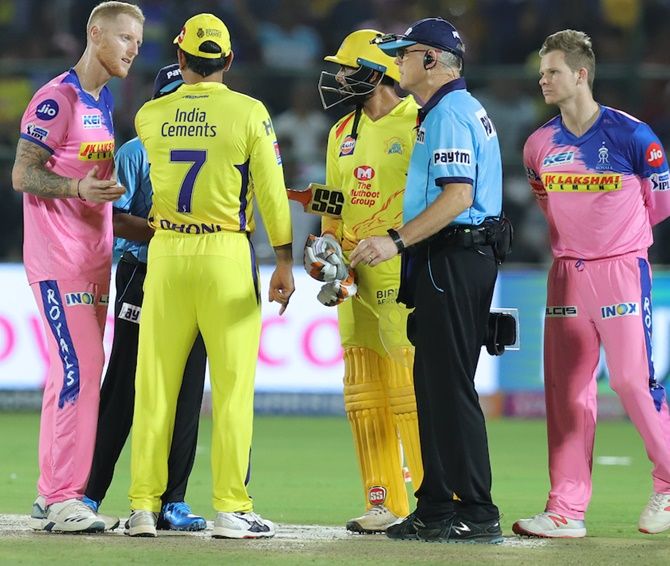 Later, a clear waist high no-ball to Santner was overlooked by umpire Ulhas Gandhe after he attempted to raise his arm to signal ‘no’.

This prompted an angry Dhoni to enter the ground and literally blast Gandhe before leg umpire Bruce Oxenford calmed the former India skipper and sent him back.

Santner then finished it off in style, spoiling a brilliant outing from Jofra Archer (1/19 in 4 overs).

Rajasthan Royals had a great start. Dhawal Kulkarni bowled a perfect away going delivery that squared up Shane Watson (0) while Suresh Raina (4) was beaten by a direct throw. 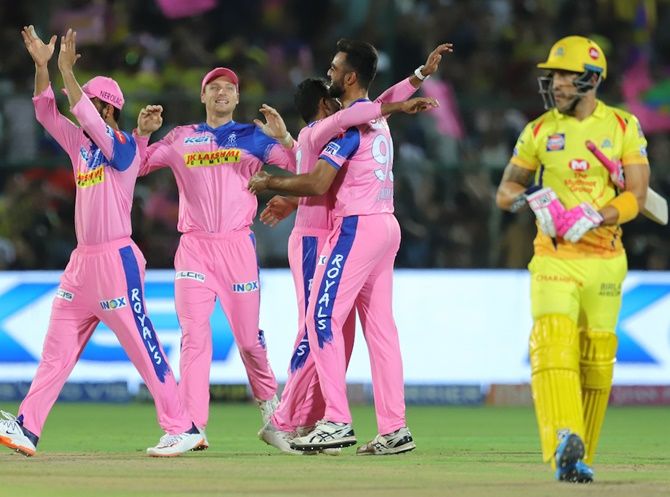 Kedar Jadhav (1) too didn't last long. It took an air-borne Ben Stokes to pull off an incredible catch at backward point off Jofra Archer's bowling. At 24 for 4, Dhoni walked in and with two young spinners in Shreyas Gopal and Riyan Parag (0/24 in 3 overs) bowling in tandem, he launched into the duo hitting them for a six each as Rayudu kept rotating the strike, hitting the odd boundaries in between. 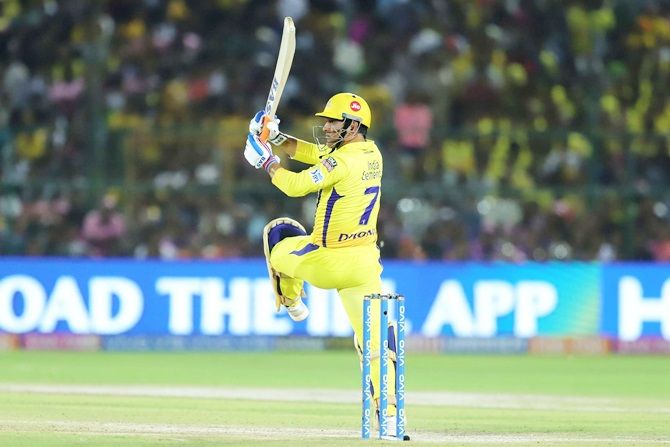 At 24 for 4, Dhoni walked in and with two young spinners in Shreyas Gopal and Riyan Parag (0/24 in 3 overs) bowling in tandem, he launched into the duo hitting them for a six each as Rayudu kept on rotating the strike, hitting the odd boundaries in between.

Their 50-run stand for the fifth wicket came in 42 balls as Dhoni deposited Gopal into the stands for his third six. Rayudu also did his bit lofting Stokes for a six. 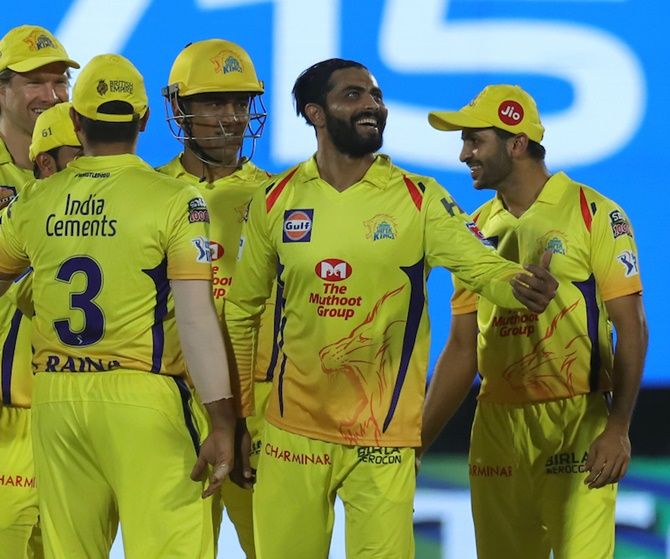 Earlier, Chennai Super Kings produced yet another disciplined bowling effort to restrict Rajasthan Royals to a modest 151 for 7.

Save Jos Buttler (23 off 10 balls) at the top of the order, none of the other Royals batsmen looked the part as CSK skipper Mahendra Singh Dhoni's immaculate reading of the track once again helped the defending champions.

The left-arm spin duo Ravindra Jadeja (2/20) and Mitchell Santner (1/25) checked the run-flow as the Royals batsmen were always playing a catch-up game. 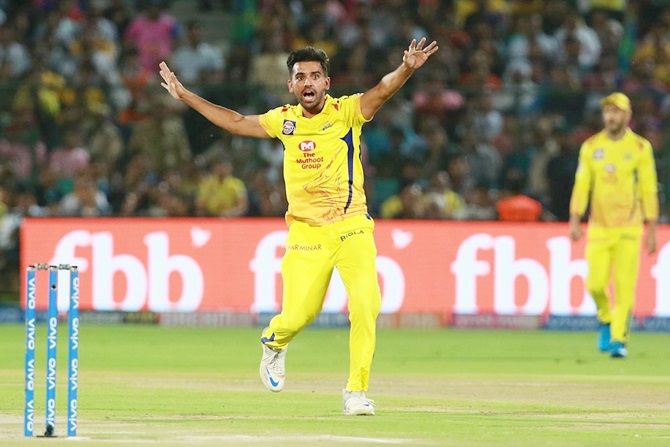 Even Imran Tahir (0/28), who went for a few more runs compared to the other two spinners, ended with decent enough figures. 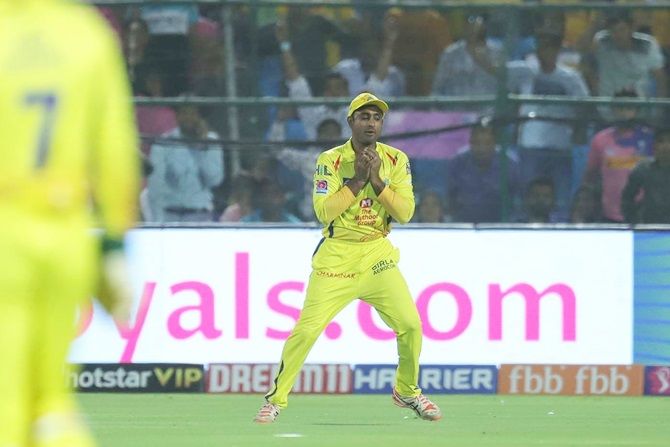 Buttler belted Shardul Thakur (2/44) for a few boundaries before he mistiming one which was easily caught by Ambati Rayudu.

Once Buttler was gone, Royals lost the momentum as wickets fell at regular intervals.

Steve Smith (15 off 22 balls) struggled before he slog-swept Jadeja towards deep mid-wicket only to find Rayudu take the catch. 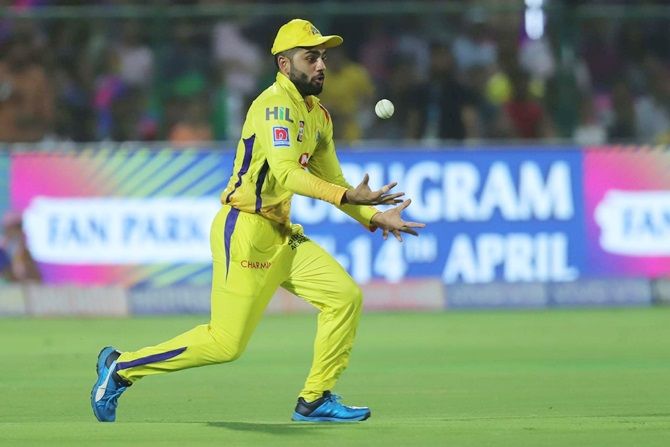 It was Shreyas Gopal, who struck a few meaty blows en route his 19 off 7 balls, who took Royals past 150 despite the home team playing as many as 42 dot balls.