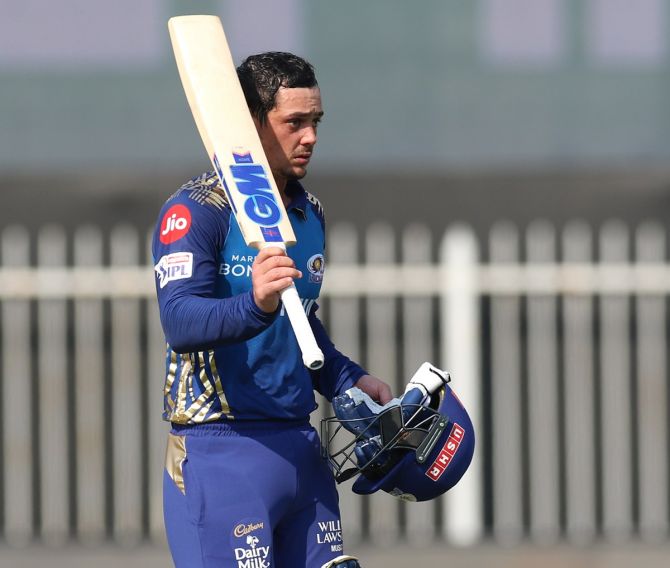 Quinton de Kock was back among the runs with a sizzling 39-ball 67, before the bowlers did a commendable job in batsmen-friendly conditions, to power Mumbai Indians to a clinical 34-run victory over SunRisers Hyderabad in the Indian Premier League match, in Sharjah, Sunday.

The swashbuckling duo of Hardik Pandya (28) and Kieron Pollard (25 not out) also played a big hand by scoring at their usual brisk pace before Krunal Pandya took Mumbai Indians past 200 with 20 runs off four deliveries in the last over. 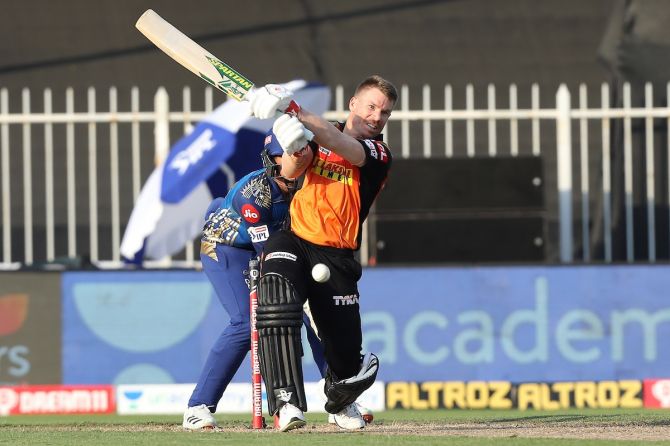 IMAGE: David Warner pulls one to the fence during his 44-ball 60. Photograph: BCCI/IPL

The Mumbai Indians bowlers then did just enough to restrict the SunRisers to 174 for 7.

Chasing 209, a formidable target on the small Sharjah ground, the SunRisers began with Jonny Bairstow sending Trent Boult's third delivery into the stands. Two fours and a six followed before Boult had the Englishman for a 15-ball 25. 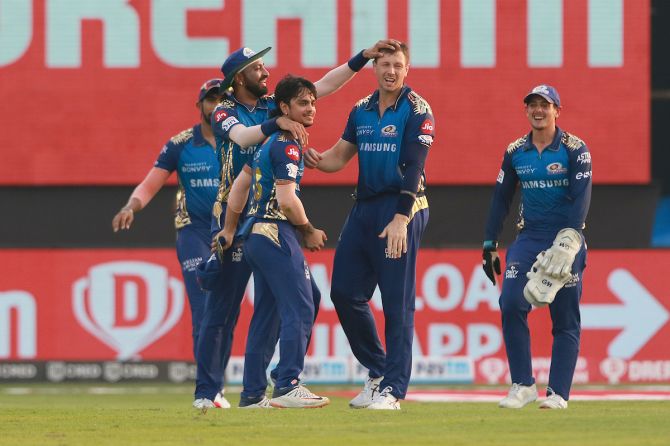 David Warner (60 off 44 balls) got into the act with a couple of boundaries off Jasprit Bumrah, and Manish Pandey raced to 16 before having a ‘life’ as Hardik Pandya dropped a sitter, his view blocked by the evening sun.

Pandey lofted Rahul Chahar over long-on for a massive six and Warner followed suit, hitting the leg-spinner for another maximum in the same over as SunRisers kept pace with the required run-rate. 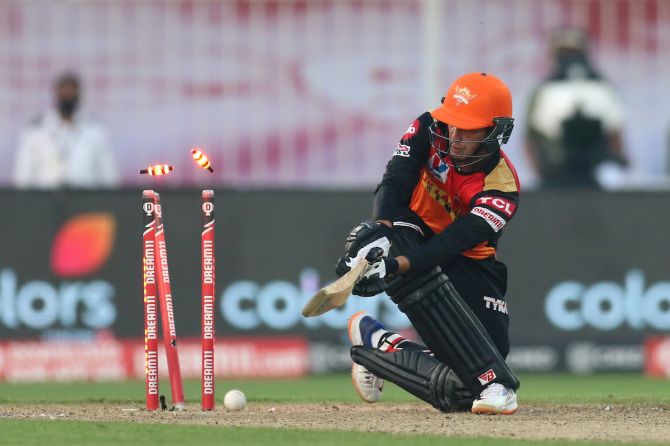 The prolific Australian then cut compatriot James Pattinson through the point region before smashing Krunal for a six and four to help the team go past the 100-run mark in the 11th over.

Attempting an upper cut against Boult, Kane Williamson was out caught by Quinton de Kock, after Bumrah bowled an excellent six-run over. 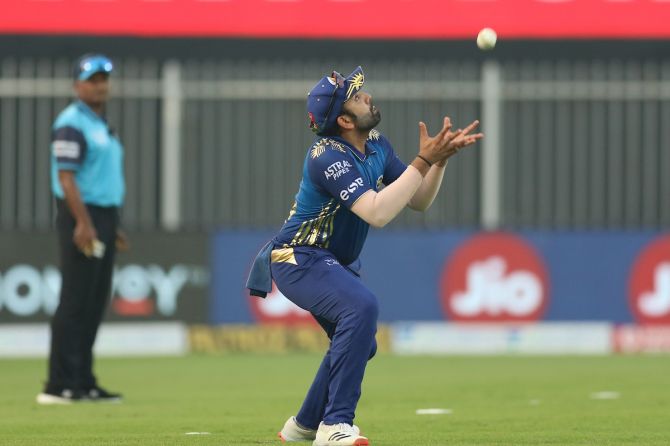 Last match hero Priyam Garg failed to replicate his performance but it was the big wicket of Warner, in the 16th over bowled by Pattinson, that sealed the game for Mumbai Indians as the required rate soared past 14 runs an over.

Earlier, Rohit Sharma plonked Sandeep Sharma over mid-wicket for a six to start the proceedings, but the Mumbai Indians skipper was out, caught behind off the next delivers as he chased a wide delivery, only to nick it to Jonny Bairstow. 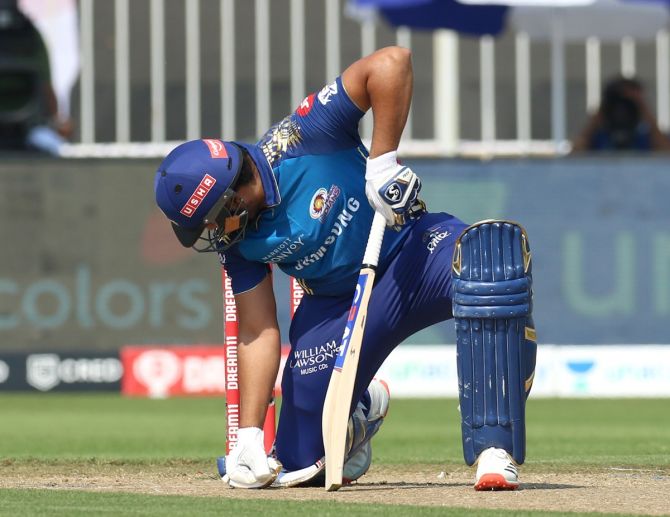 IMAGE: Rohit Sharma reacts after being caught behind by Jonny Bairstow off the bowling of Sandeep Sharma. Photograph: BCCI/IPL

On-field umpire Richard Illingworth was not convinced by Sandeep Sharma's loud appeal, but the review went in favour of the SunRisers.

Suryakumar struck six boundaries, including a couple of pleasing drives, in his 18-ball 27 before being dismissed by Siddarth Kaul, who was picked for this game ahead of Khaleel Ahmed. 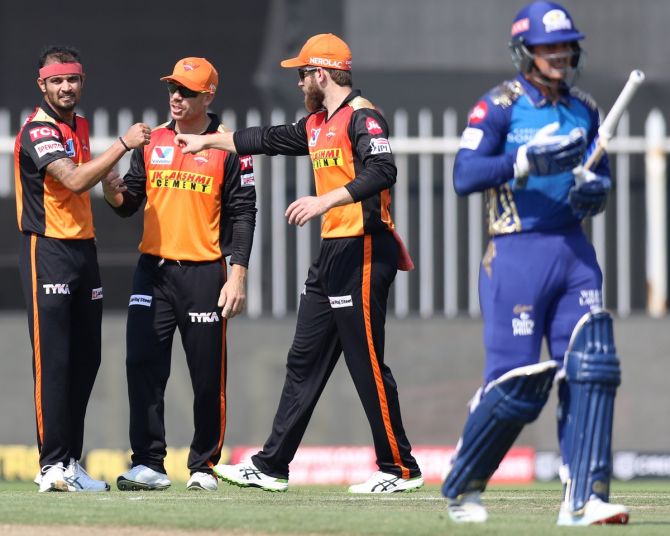 At the other end, de Kock worked the ball around nicely, in between playing the big shots, as Mumbai Indians maintained a healthy run rate and looked on a course for a competitive total.

After 10 overs they were 91 for two, with de Kock looking in fine touch at the Sharjah Cricket Stadium.

Playing in place of the injured Bhuvneshwar Kumar, Sandeep had done more than what was expected of him in his first two overs, sending back the in-from Rohit early. 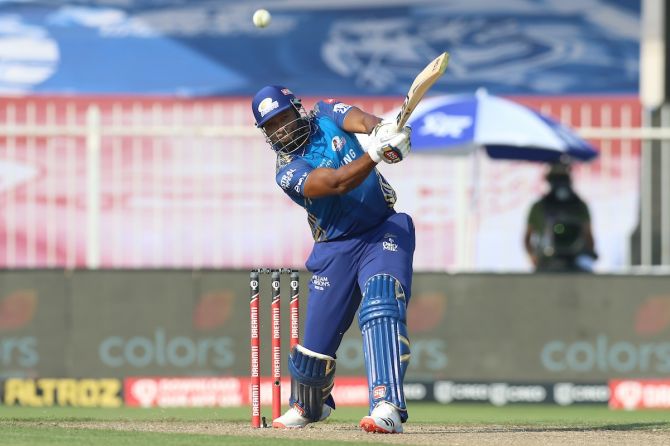 IMAGE: Kieron Pollard fires one of his three sixes into the stands. Photograph: BCCI/IPL

But Mumbai had enough firepower in their batting line-up and recovered from the early blow with de Kock leading the charge.

However, the seasoned South African, who reached his half century with a six straight over the bowler's head, was out after Rashid Khan took a fine running catch off his own bowling to signal the arrival of Hardik. 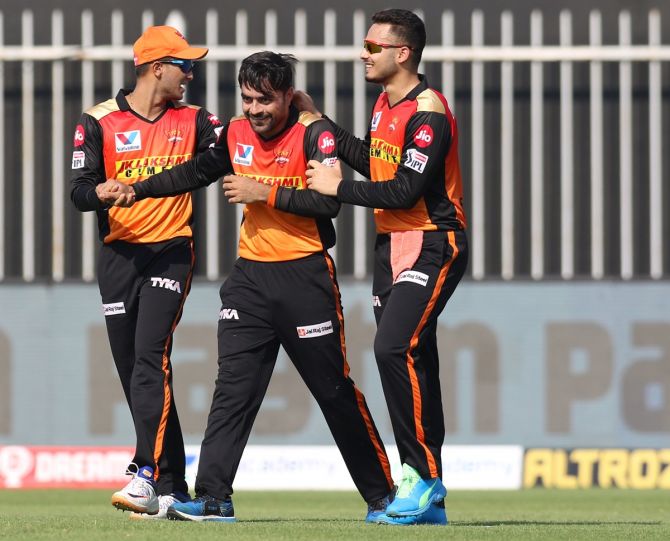 The new man in would have been dismissed cheaply but David Warner could not hold on to a difficult chance at the boundary.

Manish Pandey, who had spilled one earlier in the day, made up for that with a sensational catch to send back Ishan Kishan after a 23-ball 31.

Pollard and Hardik then did what they do best even though the likes of T Natarajan bowled quite a few yorkers. 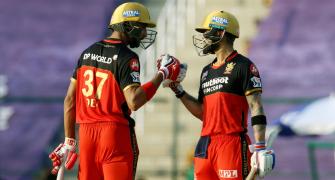 Battle of equals: Kohli's RCB up against Iyer's DC 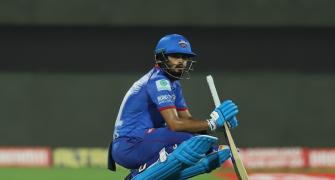 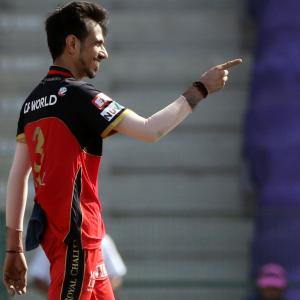