Images from the Indian Premier League match between Mumbai Indians and Rajasthan Royals in Mumbai on Saturday. 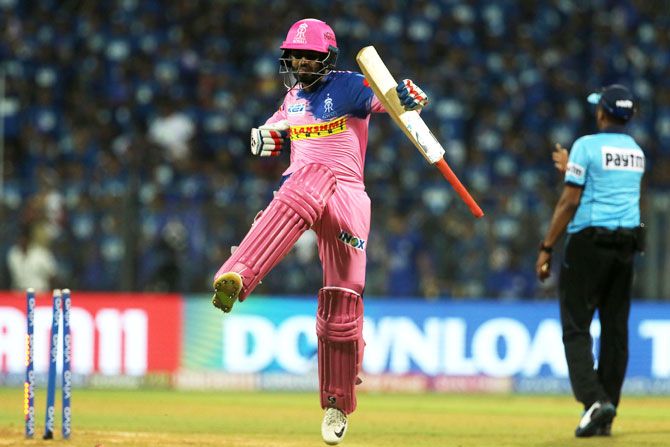 Englishman Jos Buttler laid the platform with a rampaging 89 before Shreyas Gopal held his nerve at the death to power Rajasthan Royals to a four-wicket victory over Mumbai Indians in an Indian Premier League encounter at the Wankhede Stadium in Mumbai on Saturday.

This was Royals' second victory of the season in seven games after losing a last ball thriller to CSK less than 48 hours back.

Put into bat, Mumbai Indians rode on an aggressive 81 by South African Quinton De Kock to post an imposing 187/5, but Buttler's 43-ball knock, studded with eight fours and seven sixes, set the tone before Royals survived a scare to finish the game in 19.3 overs.

The match was a forgettable one for young West Indies pacer Alzarri Joseph (0/53 in 3 overs), who was hammered for eight fours and three sixes and then was injured trying to save a boundary.

The 13th over changed the game's complexion as Buttler smashed two sixes and four fours off Joseph to bring down the equation to a manageable run-a-ball. 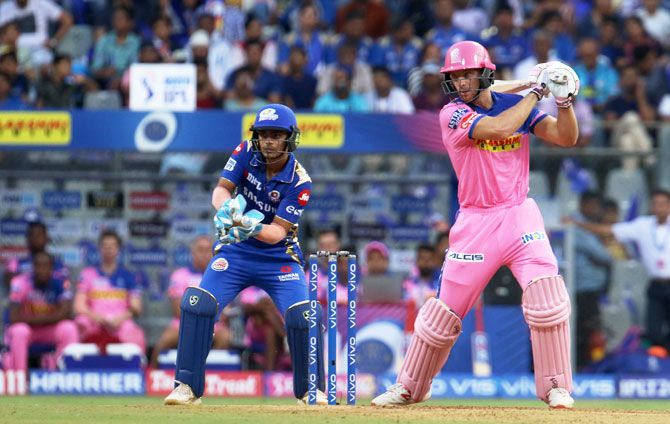 Buttler initially played second fiddle to Rahane but then upped his ante once the skipper was gone.

In the eighth over, Buttler hit Rahul Chahar for a six, and then in the next over, smashed two sixes off Krunal Pandya as he raced to 50 off 29 balls.

When Buttler departed in the 14th over, Rajasthan needed 41 runs. But then came the twist in the tale when Mumbai made a comeback of sorts sending four batsman -- Samson, Rahul Tripathi (1), Steve Smith (12) and Liam Livingstone (1) -- back to the pavilion as Rajasthan slumped to 174.6 from 147/2.

However, Shreyas Gopal (13 not out) and K Gowtham (0 not out) held their nerves to take the side home in a tense situation. Gopal hit the winning boundary off Hardik Pandya as celebrations erupted in the Rajasthan camp.

Joseph was the costliest bowler having conceded 53 runs in three overs. Earlier, Quinton de Kock hit a belligerent 81 as he powered Mumbai Indians to an imposing 187 for 5 against Rajasthan Royals in their Indian Premier League game, in Mumbai, on Saturday.

South African De Kock was the wrecker-in-chief as he hammered six fours and four sixes in his 52-ball knock and got able support from captain Rohit Sharma (47 off 32 balls), who made a comeback after missing out the last Mumbai game due to a leg injury.

A late cameo from Hardik Pandya (28 not out off 11 balls), in which smashed three sixes and one fours ensured Mumbai neared the 190-run mark. Earlier, Rohit and De Kock took the opposition attack to the cleaners as the two added 96 for the first wicket. They started the onslaught in the third over amassing 18 runs with the South African hitting a six and four off Krishnappa Gowtham. De Kock kept playing shots at will even as Mumbai raced to 57 for no loss in six over. Then De Kock dispatched spinner Liam Livingstone for two sixes over midwicket as runs came thick and fast. He raced to his fifty from just 34 balls.

Rohit, who struck six fours and a lone six, threw his wicket away giving a sitter to Jos Buttler off Jofra Archer.

And then Rajasthan made a good comeback removing Surya Kumar Yadav (16) and Kieron Pollard (6) to reduce the hosts to 136/3. 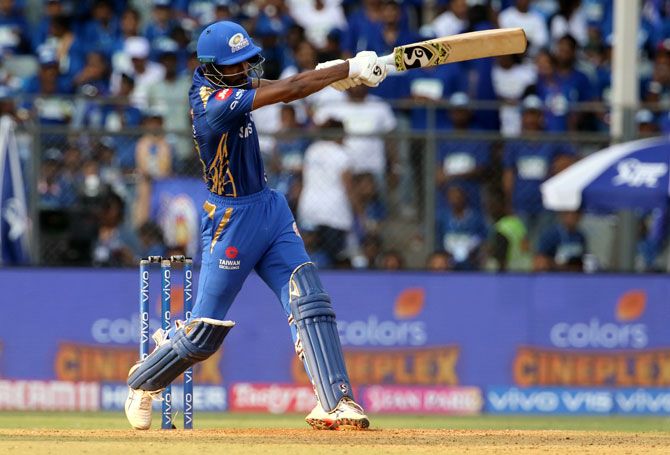 Rajasthan bowlers made a splendid comeback as they removed De Kock and Ishan Kishan before the Hardik show.

Meanwhile, it was Rohit's 100th match as captain for Mumbai Indians (including the now defunt Champions League T20 games) and it was Mumbai's overall 200th match.