Images from the IPL 2020 opener between Mumbai Indians and Chennai Super Kings, in Abu Dhabi, on Saturday. 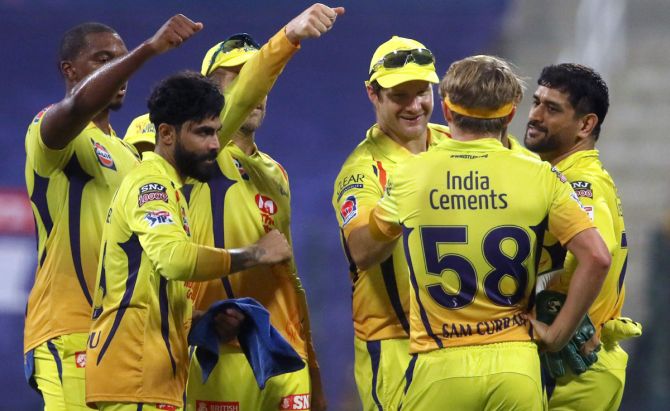 Mahendra Singh Dhoni showed he hasn't lost even a bit of his leadership acumen after a 437-day hiatus as Chennai Super Kings demolished Mumbai Indians in the opening match of the 13th Indian Premier League, in Abu Dhabi, on Saturday.

Ambati Rayudu (71 off 48 balls) blazed his way and Faf du Plessis (55 not out off 44 balls) more than made up for Suresh Raina's absence at No. 3, helping the Super Kings chase down a tricky 163-run target in 19.2 overs overs and win with five wickets to spare. It wasn't a jam-packed Wankhede rooting for Mumbai Indians, nor was it the passionate Chepauk stands, with its Yellow Army, in full fervour. It was a near-empty Sheikh Zayed Stadium in the Arabian desert, where Bryan Adams's Summer of 69 or Rocky's theme music Eye of a Tiger blared from the sound system along with artificial crowd cheers.

In this eerie set-up, Captain Cool’s brain kept ticking as his new recruits -- leg-spinner Piyush Chawla (1/21 in 4 overs) and left-arm seamer Sam Curran (1/28 in 4 overs) -- made fantastic first impressions, while the new ball pair of Lungi Ngidi (3/38 in 4 overs) and Deepak Chahar (2/32 in 4 overs) came back brilliantly in the ‘death’ overs.

The skipper also sent in match-fit Curran at No. 6 and his 18 off 6 balls ended any anti-climax that Rohit Sharma's men would have anticipated. 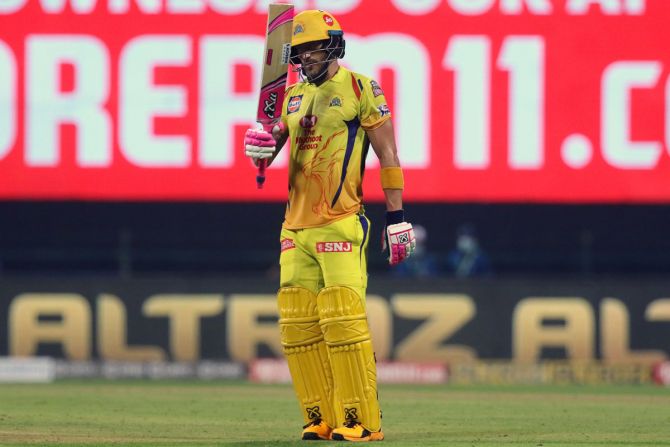 Giving less than 80 runs in the back-10 was the turning point, and then the manner in which Rayudu and Du Plessis chased it after a scratchy start saw Mumbai Indians maintain their record of not winning an IPL opening game since 2013.

Trent Boult, with an in-dipper, and James Pattinson, with a slightly dodgy decision going his way, removed Shane Watson and Murali Vijay respectively, making it 6 for 2 before Rayudu, in the company of du Plessis, who had earlier pulled off two stunning catches on the boundary line, launched a furious counter attack.

At the end, the talking point was how clueless Jasprit Bumrah (1/43 in 4 overs) looked during the day and it cost his team dearly. IMAGE: Saurabh Tiwary hits out during his breezy 42 off 31 balls. Photograph: BCCI/IPL

De Kock started in blazing fashion and launched straight into Chahar and Ngidi, as 45 came off the first four overs.

The shrewd Dhoni then introduced Chawla into the attack and the spinner immediately dismissed Rohit Sharma (12), who has a problem with wrist spinners. It was a straight delivery that Rohit tried to hit inside-out but couldn't get past Curran at the mid-off circle. The seamer was back in action as he got rid of De Kock with a well-disguised off-cutter, which the batman hit straight to Shane Watson at mid-wicket.

Suryakumar Yadav (17) and Tiwary added 44 to steady the ship, but some good out-fielding in the back-10 from the likes of Curran and Faf du Plessis had Mumbai Indians struggling at 124 for five from 92 for two. As an anchor, Tiwary proved a decent choice, hitting the first six off this year's IPL, off Ravindra Jadeja.

Hardik Pandya (14 off 10 balls) hit a couple of lusty sixes off Jadeja, but then Chawla bowled an ideal length to keep him quiet.

Jadeja was rewarded when Hardik tried to hit a third six, instead of rotating the strike, and was caught at the boundary by Du Plessis.