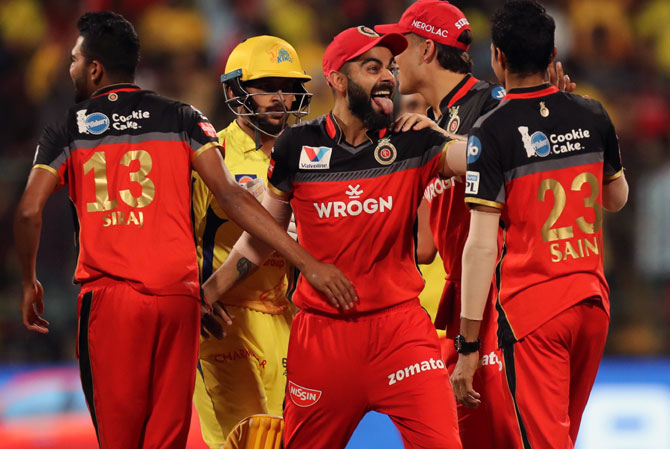 Mahendra Singh Dhoni nearly pulled off a heist but Parthiv Patel's last ball run out helped Royal Challengers Bangalore edge past Chennai Super Kings by one run off the last ball in a thrilling finish, in the IPL, in Bengaluru, on Sunday.

Chasing a target of 162, CSK needed a near-impossible 26 off the last over bowled by Umesh Yadav. Captain Dhoni, who smashed an unbeaten 84 off 48 balls that had seven sixes, took CSK to the brink as he hit 24 from the first five balls, hitting three sixes and a four but was beaten off the last ball.

He tried to sneak a quick bye that would have levelled scores and taken the match to the Super Over but Parthiv was quick to collect the ball and break the stumps with a direct hit as non-striker Shardul Thakur to give RCB only their third win of the tournament.

It could have been an easy win in the manner Dale Steyn (2/29) has brought the necessary zing that was lacking in RCB's bowling effort as he struck with two wickets in the opening over of the innings. He bowled perfect outswinger to get rid of Shane Watson caught by Marcus Stoinis in the slips before he followed it up with a perfect yorker to bowl an out-of-form Suresh Raina for a first-ball duck. 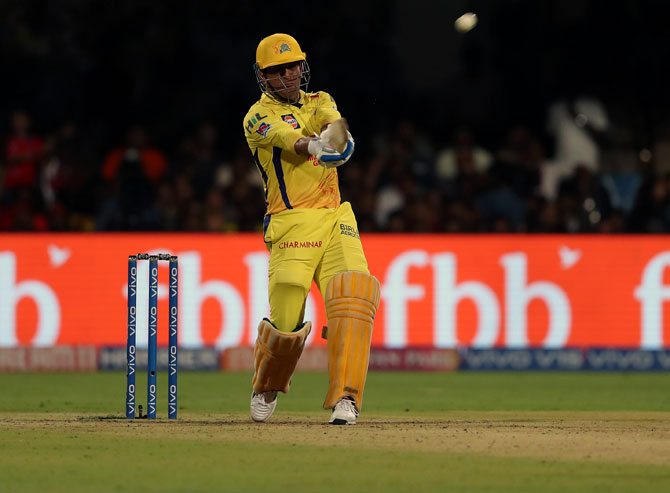 Umesh Yadav despite the odd loose delivery produced extra pace and bounce to get rid of Faf du Plessis (5) and Kedar Jadhav (9) as CSK were left tottering at 28 for four, in the sixth over.

The trusted pair of Ambati Rayudu (29 off 29 balls) and Dhoni started resurrecting the innings. Dhoni hit Stoinis for a six and Rayudu having struggled for long finally found some touch as he pulled Umesh over midwicket for a six followed by a four over the covers.

They had a 55-run stand before Rayudu was bowled by Yuzvendra Chahal (1/24 in 4 overs) as the ball deflected off his pads and crashed into the stumps leaving Dhoni with an onerous task.

Once Jadeja was run-out for 11, it looked an impossible task for CSK at 108 for 6 but Dhoni showed it was not over till he was out in the middle. 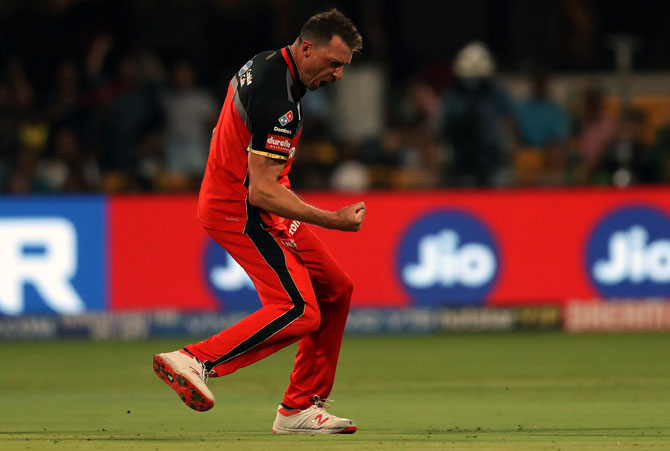 The CSK captain swung Steyn for a six over long-on to race to his fifty from 35 balls, in the 18th over, but the match was still out of reach with 36 needed from two overs for victory.

Dhoni slashed Navdeep Saini for a six over thirdman to get 10 from the penultimate over, leaving CSK to get 26 from the final over and Dhoni came up with an incredible assault in the final over but CSK fell short by just one run.

Earlier, Parthiv Patel's attacking half-century and Moeen Ali's final flourish wasn't enough as Royal Challengers Bangalore put up a sub-par 161 for 7 after being put into bat.

Parthiv smashed 53 off 37 balls but didn't get a lot of support from the other end until Moeen Ali used the long handle to hit 26 off 16 balls even as AB de Villiers (25 off 19 balls) and Akshdeep Nath (24 off 20 balls) delivered little after promising a lot. 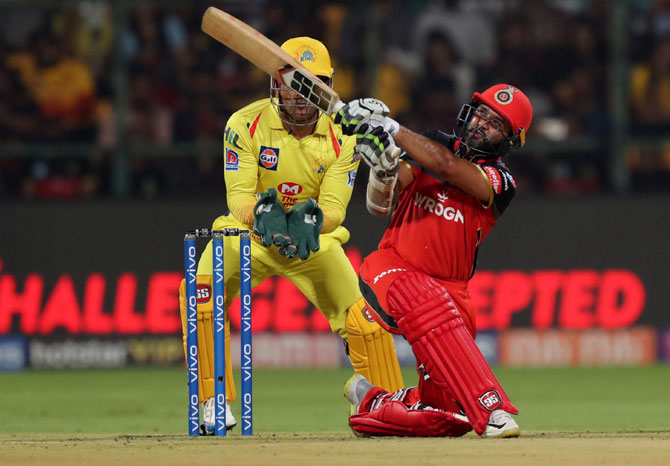 Deepak Chahar (2/25 in 4 overs) was impressive as usual while Ravindra Jadeja's (2/29 in 4 overs) twin breakthrough during partnership was also important in the context of the innings.

Dwayne Bravo (2/34 in 4 overs) also chipped in with a couple of wickets in the final few overs.

Virat Kohli (9) hit a couple of boundaries before a thickish edge off a Chahar outswinger brought about his downfall as he was caught behind by wicketkeeper Dhoni.the stumps.

However Parthiv and AB de Villiers (25 off 19 balls) added 47 runs in only 4.2 overs with the former South African skipper looking in fine touch. 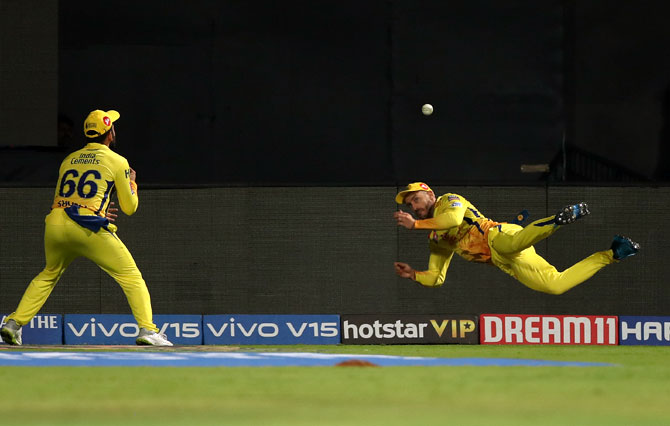 De Villiers smashed Chahar over square leg while Parthiv also flicked Shardul Thakur (0/40 in 4 overs) for a couple of sixes.

Having picked 16 runs off the final Powerplay over, RCB looked in control before Jadeja induced de Villiers to go for a big shot only to be caught by Faf du Plessis at long-off.

Parthiv was joined by Akshdeep Nath (24), who hit a six off Jadeja, added 41 runs with his senior partner before he also perished to the Jadeja-du Plessis combine as the South African took another good catch. Du Plessis also was part of another brilliant catch to help dismiss Marcus Stoinis, who attempted to hit Imran Tahir down the ground. He took the catch close to the ropes before the momentum carried him over but he managed to lob the ball back which was taken by substitute fielder Dhruv Shorey. 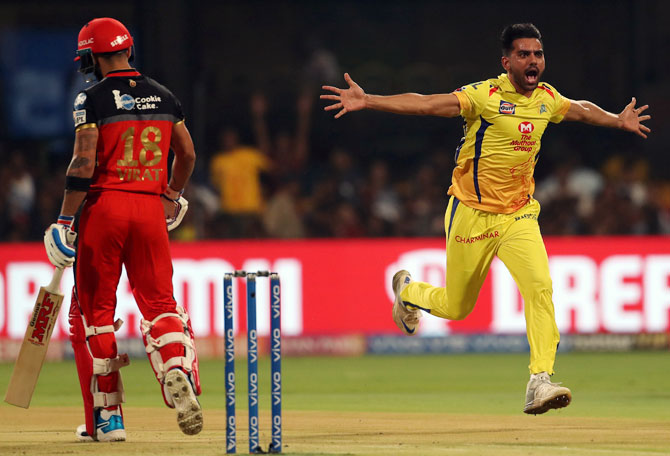 The baby-faced Parthiv, whose form has been inconsistent during the tournament so far, was ready to punish the loose balls on the day as he sent a Jadeja half-tracker soaring into the stands for his third six and hit Imran Tahir for a fourth one.

He reached his half-century by pulling Bravo in-front of square but was out off the very next ball. Parthiv's innings had two fours and four sixes.

Moeen hit five boundaries to score some quick runs at the end and take RCB past 160-run mark. 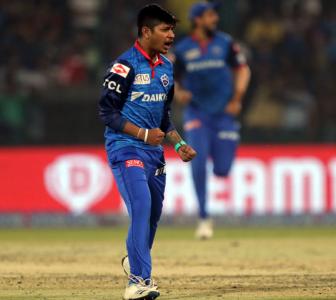 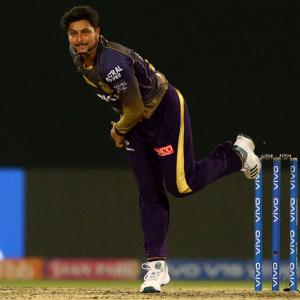 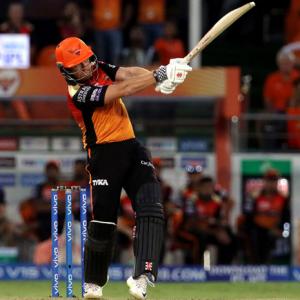