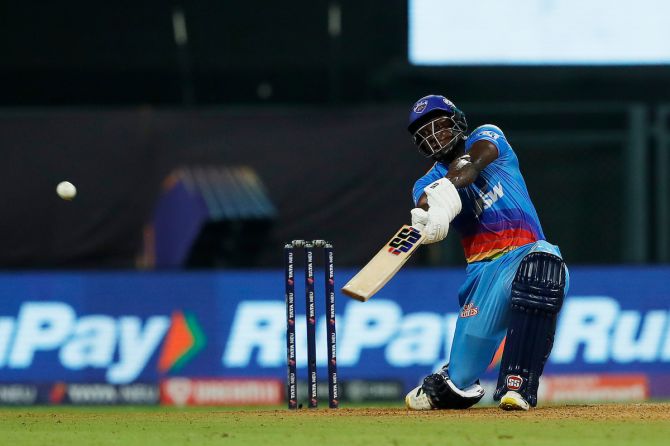 IMAGE: Rovman Powell contributed with a late cameo of 33* to take his team through in the final over of the match. Photograph: BCCI

Delhi Capitals made rough weather of an easy chase due to a middle-order collapse before recording a comfortable four-wicket victory over a lacklustre Kolkata Knight Riders here on Thursday, keeping their IPL play-off qualification hopes alive. Chasing an easy target of 147, DC were 84 for five and 113 for six at various stages of the innings before Rovman Powell (33 not out ) once again displayed his big-hitting prowess to get DC past the target with an over to spare.

The hero of the win was certainly Kuldeep Yadav, with a game-changing 4 for 14 when KKR batted. While DC with 10 points are placed sixth, KKR remained at third from the bottom, and the chopping and changing in the side is a testimony that all is not well in the Shah Rukh Khan-owned franchise's camp. 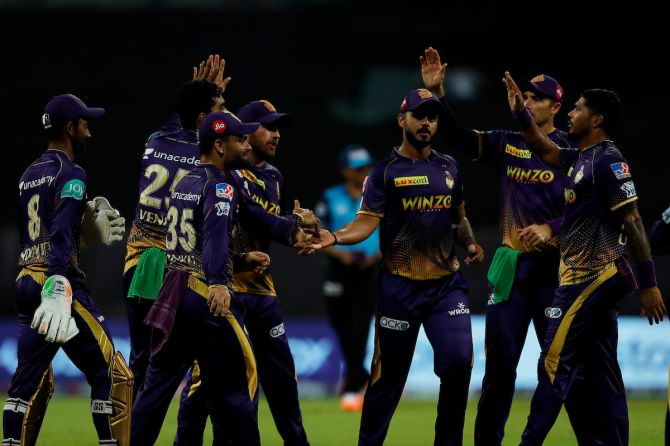 Whether big bosses, coaching staff and captain Shreyas Iyer are all on same page is a million dollar question at the moment as they suffered a fifth straight defeat. Defending a total of 146 wasn't easy but Umesh Yadav (3/24) did try his best as he started brilliantly with a diving return catch off the very first delivery of the DC innings to sent Prithvi Shaw (0) back. David Warner (42 off 26 balls) was in fine touch, adding 65 for the third wicket with Lalit Yadav (22 off 22 balls), as DC cruised along at 82 for two. But it soon became 84 for five as both the set batters were removed in quick succession and skipper Rishabh Pant (2) played a rank bad shot to bring KKR back in the game.

Axar Patel's (24 off 17 balls) needless run-out after being well-set made it 113 for six, and more importantly, 34 to get in five overs. KKR captain Shreyas Iyer had to get one over done from his non-regular bowler and Powell took advantage of that, dispatching Venkatesh Iyer for a six off the very first ball. The 17th over yielded 18 runs and it changed the fortunes for Delhi.

A host of changes in the playing XI did seem to have affected the balance of KKR as their innings lacked momentum, save Shreyas Iyer (42 off 37 balls) and Rana (57 off 34 balls), who tried to get a move on. 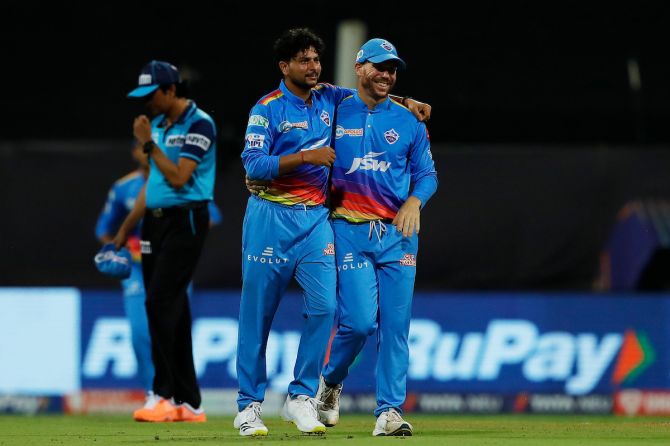 IMAGE: Kuldeep Yadav had a fine day on the pitch, finishing with figures of 4-14. Photograph: BCCI

Rana's partnership of 62 for the seventh wicket with Rinku Singh (23 off 16 balls) proved to be a saving grace after the two-time champions slumped to 83 for six at one stage.

Kuldeep, who is in the middle of a brilliant season, finished with 4 for 14 which included the wickets of Shreyas and the dangerous Andre Russell. If Kuldeep wreaked havoc in the middle overs, it was Mustafizur Rahaman (3/18 in 4 overs), who was brilliant at the death, giving away only two runs and picking three wickets in the last over.

Kuldeep's manner of using the flight in one delivery and suddenly increasing the pace in other was there for everyone to see. It was a bit surprising that skipper Rishabh Pant didn't complete his quota of overs. 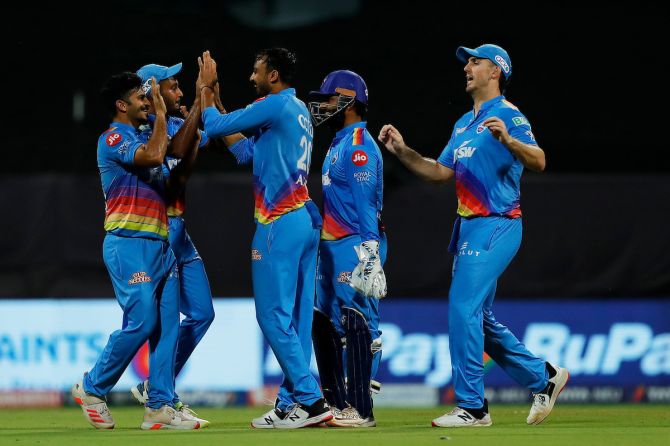 In the case of domestic veteran Baba Indrajith (6 off 8 balls), suffering from debut match nerves having waited for this day for 10 years, Kuldeep flighted one but the batter failed to reach to the pitch of the delivery and didn't get the elevation to get caught in the deep.

Sunil Narine (0) got a classical left-arm wrist spinner's googly that turned the other way round and was caught on the back foot. 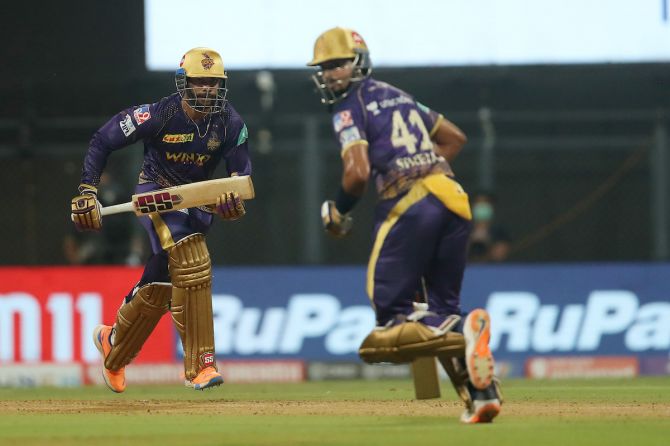 KKR skipper Shreyas chased a delivery to get a kind of under-edge which Pant grabbed, displaying nice reflexes. Russell (0) was beaten in flight and change in the pace of delivery while shortening the length. While it was a clumsy stumping by the DC skipper, it was just the result they wanted.

At the onset, Australia's white ball skipper Aaron Finch played all over an inswinger from Chetan Sakariya to get bowled, while Venkatesh Iyer again fell to an ill-planned sweep shot off Axar Patel. Then, Rana defied DC and saved KKR from getting all out under 100