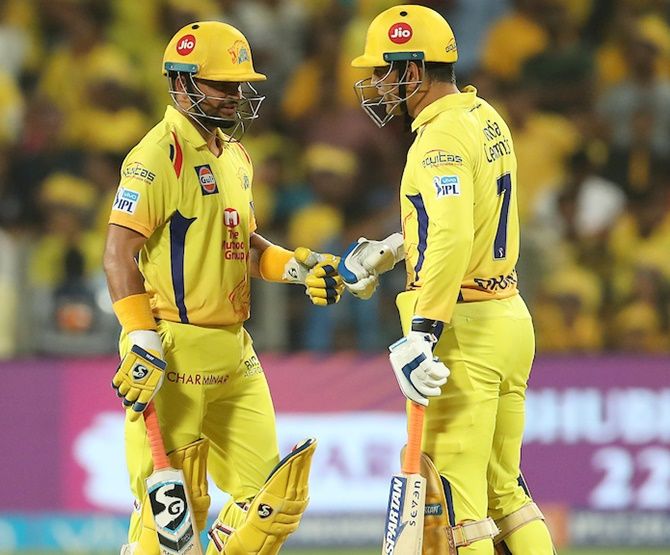 Young paceman Lungi Ngidi conceded only 10 runs and took four wickets before Suresh Raina hit a measured 61 as Chennai Super Kings eliminated Kings XI Punjab from the Indian Premier League (IPL) with a five-wicket win, a result which sealed Rajasthan Royals' place in the Play-offs, in Pune, on Sunday night.

Delhi Daredevils had done a favour to Punjab by knocking out Mumbai Indians with an 11-run win in the first match of the day as it kept Punjab in the hunt to take the last-available spot in the Play-offs. 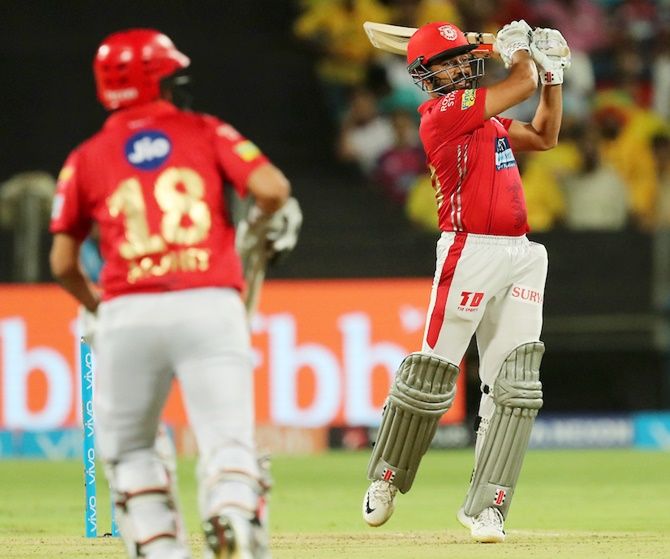 When Punjab batsmen needed to fire in unison, only Karun Nair (54) showed stomach for fight with his 26-ball knock, which was laced with three fours and five sixes.

Nair's half-century helped Kings XI Punjab recover from a poor start and post 153 in 19.4 overs but they needed to win by at least 53 runs to qualify for the Play-offs. 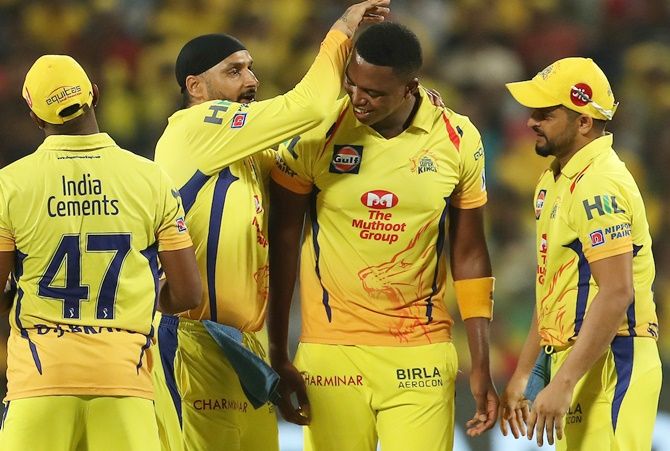 It was South African paceman Ngidi who triggered a top-order collapse as he swung the ball both ways to confound the Punjab batsmen. He conceded only 10 runs in his four-over quota and scalped key players.

CSK needed to win in 17.3 overs to snatch the top spot but they had to be content with a second-place finish behind Sunrisers Hyderabad as they could overhaul the target only in 19.1 overs.

Deepak Chahar (39 from 20) shared a crucial 56-run stand Suresh Raina (68 not out) in Chennai's win while skipper Mahendra Singh Dhoni, who batted down the order, scored 16 off seven balls and finished the match with a six. 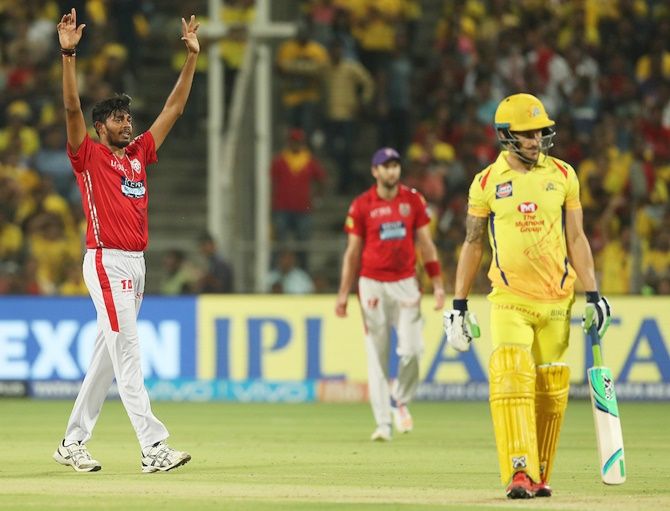 With the wicket helping seamers, CSK's chase was far from smooth with Ankit Rajpoot dismissing Faf du Plessis (14) and Sam Billings (0) in successive balls. This was after Mohit Sharma had scalped in-form Ambati Rayudu (1).

Harbhajan Singh (19) was sent up the order with a licence to go after the bowling. He swung his bat wildly but did not connect all the time, though he found a six and two fours.

The wicket was tough for aggressive batting and working the ball around was the best option. Raina changed his approach and started rotating the strike even as Harbhajan kept attempting big shots. 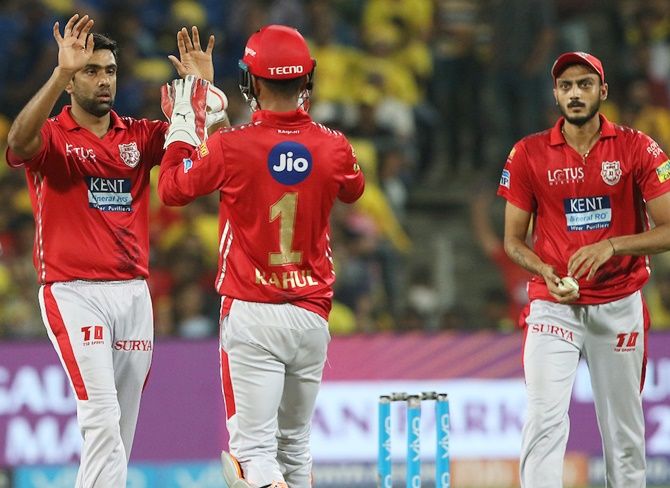 His struggle ended when rival captain Ravichandran Ashwin trapped him. Mahendra Singh Dhoni delayed his arrival at the crease and sent Deepak Chahar ahead of himself. After getting his eye in, Chahar slammed Ashwin for two sixes and a four before launching Axar Patel for a massive six. His innings was ended by Ashwin, bringing Dhoni at the crease.

The two experienced players took the side past the finish line.

CSK and SRH will now clash in the Qualifier 1 on Tuesday while Royals and KKR will lock horn in Eliminator on Wednesday.

Earlier, Ngidi first had dangerous Chris Gayle (0) caught behind and then bowled other opener KL Rahul with a peach of delivery that swung in and sent the stump kart-wheeling.

Deepak Chahar had Aaron Finch (4) caught by Raina as Punjab managed only 29 runs in the Powerplay overs.

In his sensational three-over spell, Ngidi conceded just seven runs and scalped both the openers.

David Miller (24) and Manish Tiwary (35) repaired the innings with a 60-run partnership before left-arm spinner Ravindra Jadeja broke the stand by dismissing the latter.

Miller too did not last long after departure of Tiwary as he was undone by a well-executed yorker by West Indian Dwayne Bravo. The Miller wicket meant that Punjab were reeling at 80 for five in 12.1 overs.

A small partnership developed between Axar Patel (14) and Nair but Sam Billings pulled off a stunning diving catch to get rid of the left-hander. Still, Punjab got 18 runs from that Shardul Thakur over with Nair finding a six and two fours.

Ngidi returned to the attack and saw the back of rival captain R Ashwin, who could not even open his account, nicking the ball to his counterpart MS Dhoni behind the wickets. Punjab could not even bat for full 20 overs and were bowled out in 19.4 overs.

Had it not been a fighting knock from Nair, they would not have crossed even 150-run mark. 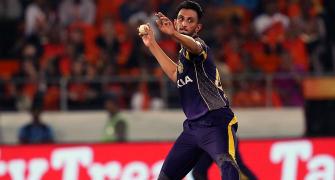 Turning Point: Krishna's 3 for 4 at the death 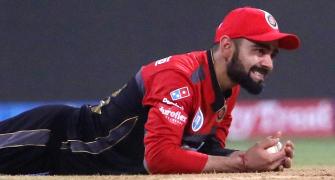 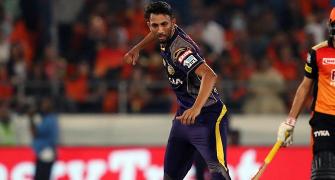 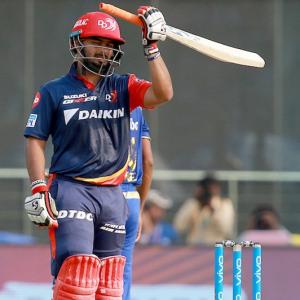 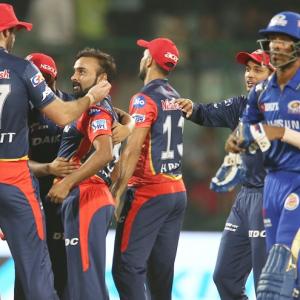