Mumbai rode on their best opening stand of the season –- 93 runs -- provided by Sachin Tendulkar (48) and Dwayne Smith (47) and a quick-fire unbeaten 34 by Dinesh Karthik to rattle up 170 for six at the Wankhede stadium.

The hosts then bowled out the visitors for 105 in 18.2 overs to emerge convincing winners and shoot to the second position on the league table with 16 points, behind leaders Chennai Super Kings (18), whom they had beaten comprehensively on Sunday.

Only Manvinder Bisla (17) and Jacques Kallis (24) got the starts for the Knight Riders without flourishing fully among the top five batsmen after the dismissal of captain Gautam Gambhir for a duck. 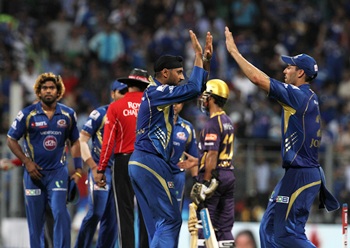 Spinners Harbhajan Singh (3) and Pragyan Ojha (2) were the main wicket takers along with Mitchell Johnson (2) and Lasith Malinga (2) while Abu Nechim Ahmed too got a wicket.

It was Mumbai's sixth straight home win of the season and eighth overall.

The comprehensive defeat, their tenth in 12 games against Mumbai in the tournament's history, was also the Knight Riders' eight loss of the season and they are virtually out of contention for a berth in the four-team play-offs.

Knight Riders began the stiff run-chase disastrously, losing captain Gambhir for a second-ball duck in the first over, from Mitchell Johnson.

Bisla and Kallis took the score to 38 at the end of the sixth over of power play, but then the former – dropped on 0 – was stumped while trying to give the charge to left-arm spinner Ojha, who also removed Yusuf Pathan cheaply.

And when Kallis was out to Harbhajan for 24, it left the Knight Riders in a very difficult position at 58 for 4 just at the half way stage of their innings.

In-form batsman Eoin Morgan also fell cheaply in the 13th over to virtually end their hopes.

Harbhajan later dismissed Debabrata Das and Rajat Bhatia to finish with fine figures of 3 for 27.

Earlier, Mumbai Indians got off to their best start but then lost their way before finishing with a flourish to post a challenging score.

Sachin Tendulkar used the field restrictions in the initial overs in his attractive 28-ball innings before he and Smith departed in quick succession.

Thereafter, only Dinesh Karthik, who smacked 34 in 18

balls with two sixes and three fours, prospered while Mumbai lost wickets at regular intervals before adding 26 runs. Tendulkar struck Ryan McLaren for five fours in the fourth over, which included drives to the off and two successive pull shots, after he had spanked the same bowler for successive straight-driven boundaries in his first over.

But Smith struggled to put bat to the ball against L

Balaji, who started off with a maiden over to the West Indian in his excellent first spell of three overs for seven runs.

The stand was nipped by Bhatia – coming on for Jacques Kallis – who deceived and clean bowled Tendulkar with a slower ball when he was well posed to score his first half century of the tournament. The batsman tried to paddle sweep and missed.

In the next over, his opening partner Smith too departed, caught at long on off Abdulla, to bring together captain Rohit Sharma (16) and Karthik.

The third wicket duo added 31 runs before the hosts lost four wickets for the addition of 14 runs before Karthik and Mitchell Johnson (10 not out) added 26 runs in the last nine balls.

Mclaren picked two wickets in one over but was smashed around for 60 runs while the Knight Riders' best bowler Balaji was not given his full quota in a strange decision by captain Gambhir. 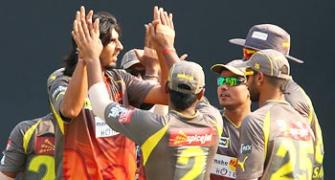 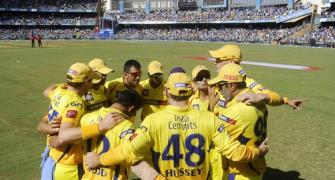 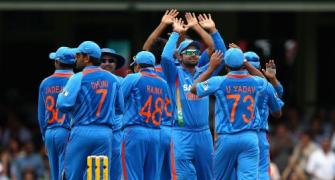 Have selectors forgotten the World Cup is only 21 months away? 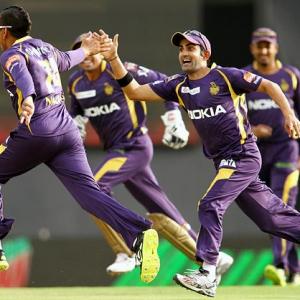