Jasprit Bumrah's mastery at the 'death' wins it for Mumbai Indians. 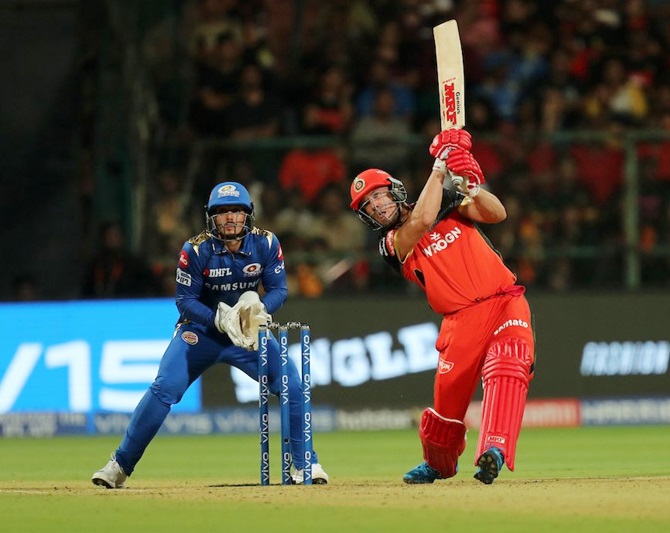 An umpiring howler off the last delivery cost Royal Challengers Bangalore dearly as Mumbai Indians beat the hosts by six runs, largely due to Jasprit Bumrah's brilliant spell at the death, in Thursday’s IPL encounter in Bengaluru.

Needing six to take the game into the Super Over, Lasith Malinga's final delivery to Shivam Dube was a no-ball that was missed by the on-field umpires and Royal Challengers finished with 181 for 5 in reply to 187 for 8 by Mumbai Indians.

AB de Villiers, who nearly took Bangalore to victory with an unbeaten 70 off 41 balls would have faced the free-hit had the umpires called a no-ball off the last delivery.

But nothing can be taken away from fit-again Bumrah's mastery at the death as he singlehandedly won it for Mumbai with superb 17th and 19th overs. 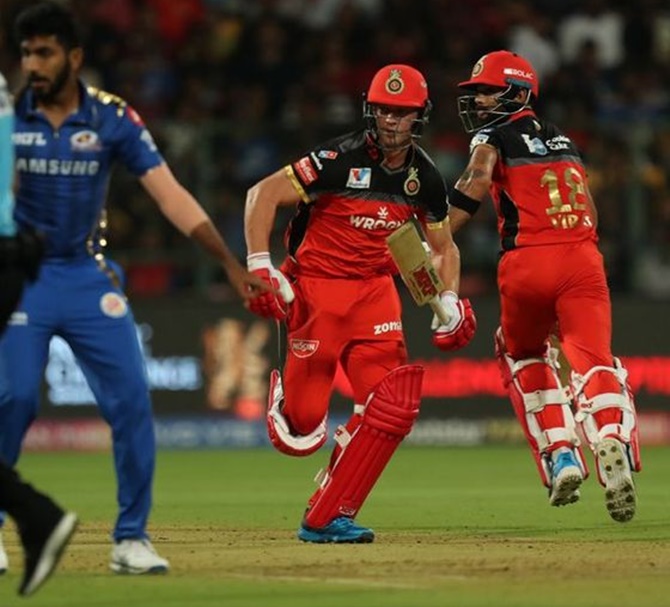 During chase, Kohli signalled his intentions at the beginning itself, hitting Bumrah for three consecutive boundaries in one over. Hardik Pandya was slashed through the point and cover driven for successive boundaries.

Mayank Markande, who dismissed Parthiv Patel (31 off 22 balls) with a googly was hit for a straight boundary by Kohli. On the day, Kohli became the second man after Suresh Raina to complete 5000 runs in the Indian Premier League.

De Villiers, who got a reprieve when Yuvraj Singh failed to anticipate a sharp chance in the slip cordon, got his act together and dispatched Markande into the stands. He then got his second six off Lasith Malinga to finally get into the groove.

With the partnership one short of 50-run mark, Bumrah came back for his second spell and bowled a sharp bouncer; the RCB skipper couldn't maintain his balance trying to execute a pull-shot and Hardik Pandya completed the formalities.

However, De Villiers, who was set by then was in a mood to take Malinga to the cleaners. A shadow of his old self, Malinga was missing length most of the time and two huge sixes in the 16th over of the Lankan slinger saw De Villiers get the equation down to 41 off 24 balls.

But Bumrah kept Mumbai in the match, giving away only one run in the 17th over as 40 was required off the last three. 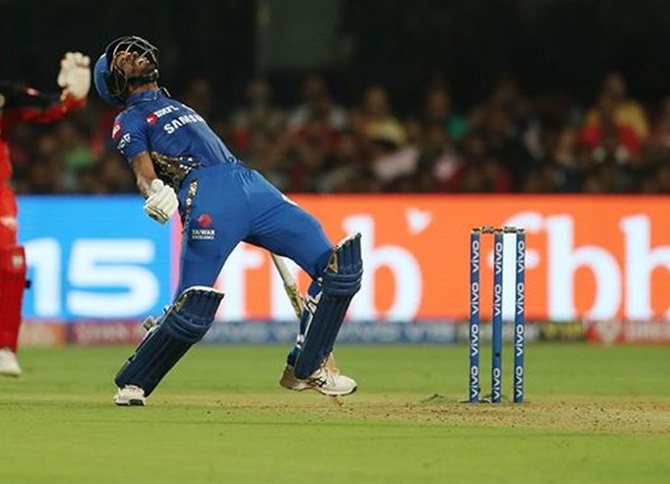 IMAGE: Hardik Pandya celebrates after hitting his third six out of the stadium.  Photograph: IPL/Twitter

Earlier, Pandya hit three sixes and two fours in his unbeaten 32 off 14 balls after Yuzvendra Chahal (4/38 in 4 overs) reduced Mumbai Indians from a comfortable 124 for 2 to 147 for 7.

Mumbai lost five wickets in the space of 3.3 overs for only 23 runs.

This was after a vintage Yuvraj Singh raised visions of a six-sixes over with three maximums in Chahal's 14th over.

However, he wasn't fourth time lucky as Chahal's courage to keep flighting the ball yielded results. 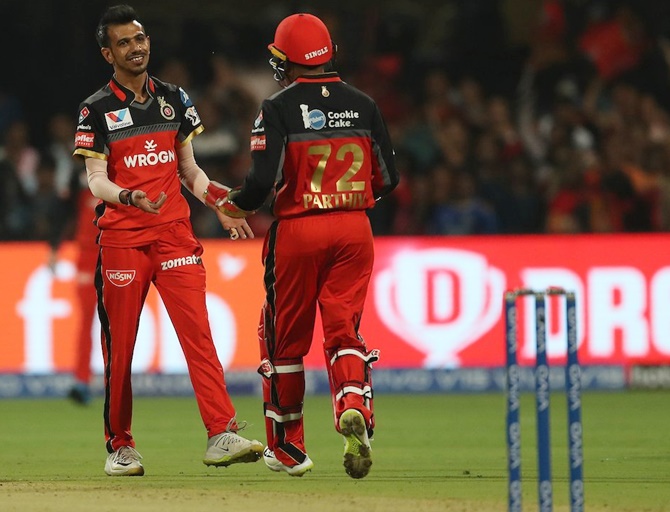 Chahal then removed Suryakumar Yadav (38 off 24 balls) and Kieron Pollard in quick succession to bring Royal Challengers back in the match.

It was then left to Hardik Pandya to score the bulk of the 30 runs in the final two overs and take Mumbai to a fighting total on a placid batting track.

In fact, Hardik's third and final six went out of the stadium as he gestured to the dressing rooms pointing to his bulging biceps.

However, at the beginning it looked like Mumbai would cross the 200-run mark as Rohit Sharma (48 off 33 balls) and Quinton de Kock (23 off 20) added 54 for the opening stand, only to be foiled by Chahal's lion-hearted bowling. 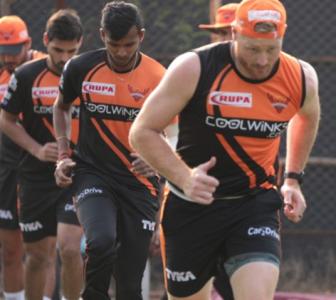 Here's how Guptill is preparing for World Cup 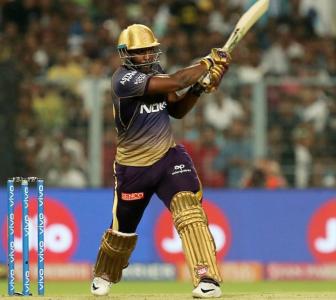 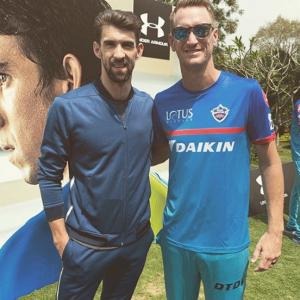