Dwayne Bravo smashed a six off the last ball as Chennai Super Kings pulled off a stunning five-wicket win over Kolkata Knight Riders in a dramatic Indian Premier League match to keep their hopes of a play-off berth alive in Kolkata.

With five runs required from the last ball, Bravo (11 not out) smashed Rajat Bhatia for a six over long on to stun a jampacked crowd at Eden Gardens.

Chasing 159 for a win, Michael Hussey and Murali Vijay set the platform with a 97-run stand from 10.2 overs for the opening wicket.

But Sunil Narine's mystery bowling, in which he claimed 2/14, swung the momentum in favour of Kolkata before Chennai skipper Mahendra Singh Dhoni (28) set up the match nicely, taking 18 runs from the penultimate over bowled by Marchant de Lange.

Nine runs were required from the last over but with Dhoni being dismissed when he was bowled by a slower ball by Bhatia in the second ball, the match went down to the wire.

Aiming to send the ball out of the park, Bravo miscued one delivery in the penultimate ball when his bat slipped out of his hands on to the midwicket to take the match to a last ball finish.

With the win, Chennai climbed to fourth spot in the table to with 17 points from 15 matches, the same as Kolkata who occupied the third spot with a better net run rate.

The win also avenged Chennai's first-leg defeat at home against the same opponents. 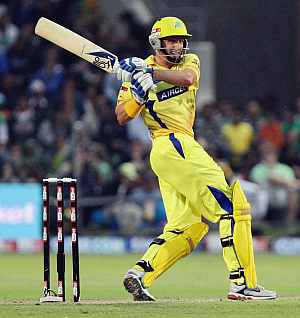 Chennai were given an aggressive start by Hussey and Vijay who put on 97-run partnership from 62 balls. The duo seemed to begin from where they had left in the previous match when their 75-run stand had set the tone for a comprehensive nine-wicket win over table toppers Delhi Daredevils.

Laxmipathy Balaji, having recovered from a ligament strain, looked out of sorts as the seamer was hit for 11 runs that included a six, a boundary and a wide.

Hussey was equally ruthless against Jacques Kallis for a six in the next over while Vijay too complemented the Aussie with some delightful strokes. It was raining sixes and boundaries all over the park.

The first powerplay yielded 51 runs as Chennai were comfortably placed at 96 for no loss in 10 overs.

The blazing start meant that the required run-rate was well under control while Kolkata struggled on the field.

Even a successful 11th over in which Narine foxed the Chennai opening duo could not make much of an impact.

A third wicket followed in the form of Suresh Raina (8) but with the equation reading 49 runs from 40 balls, it was well under control for Dhoni's men.

But Narine's final over in which he conceded just three runs, swung the momentum in favour of Kolkata with 32 required from last three overs.

Narine returned with figures of 4-0-14-2 to give Kolkata a fine chance but de Lange's penultimate over in which he leaked 18 runs gave the momentum back to Chennai.

Earlier, put into bat, Kolkata put up yet another stupendous opening partnership when Gambhir and McCullum put on their season's second highest 99.

The skipper once again led from front with a 43-ball 62, his sixth half century in 10 matches, and together with McCullum (37) the duo decimated the Chennai attack.

At one point, it seemed that Dhoni's ploy to field on this difficult track had backfired in their must-win match to keep their play-off hopes alive.

But another shoddy performance by Kolkata middle order meant that the home team was pegged back to 158 for six.

In fact, had it not been for Debabrata Das's cameo of 19 from 10 balls with two boundaries and one six, Kolkata could have been in trouble to reach the 150-run mark.

Kolkata were 86 for no loss after 10 overs but lost two wickets for 26 runs in remaining five overs for Chennai to make a stunning turnaround.

Left-arm spinner Jakati, who leaked 17 runs from his first two overs, made a successful return in his second spell with 2/9 that included the prized scalps of Kallis and Gambhir to peg back the Knight Riders.

It was a clinical start by Gambhir and McCullum who made their intention loud and clear, taking charge of Chennai pace spearhead Ben Hilfenhuas.

Gambhir pulled Hilfenhaus over square leg while McCullum came down the track to hit him over mid on in the same over to unsettle the Aussie's rhythm.

Gambhir hit Jakati for a six and followed it up with a boundary as Kolkata raced to 50 for no loss in the sixth over.

Jakati then dropped a sitter from McCullum in the same over when the New Zealander was on 11.

Gambhir notched his sixth fifty of the season from 31 balls that included five fours and three sixes.

McCullum also started firing at the other end, hitting Raina for a six as things started to look ominous for Chennai. 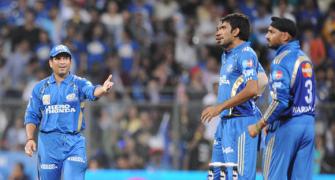 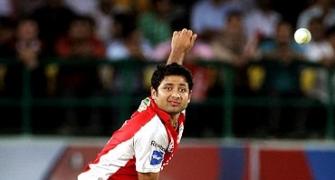 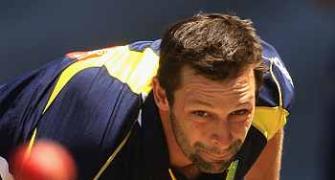 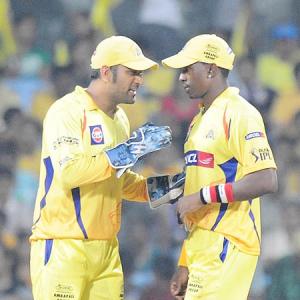 Can Chennai upstage KKR at home? 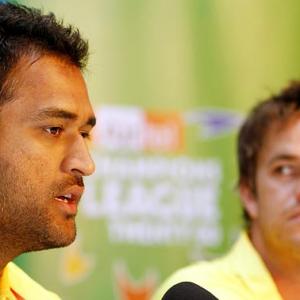