Virat Kohli led from the front with a breathtaking unbeaten 93 as Royal Challengers Bangalore made short work of a challenging target from Sunrisers Hyderabad winning by seven wickets in a Pepsi Indian Premier League match in Bangalore.

Chasing a commendable target of 162, Kohli made a mockery of Sunrisers bowlers as he singlehandedly guided his team to victory smashing 11 four and four sixes off 47 balls as they knocked off the runs with 14 balls remaining.

It was a sweet revenge for RCB who had lost to Sunrisers in a 'Super Over' two days back.

The match swung decisively in RCB's favour in the 16th over bowled by Amit Mishra where Kohli smashed the leggie for 21 runs. This included to straight sixes. In the next Thisara Perera over he got another 16 runs to close in on the match and couple of boundaries from Ishant sealed the issue. 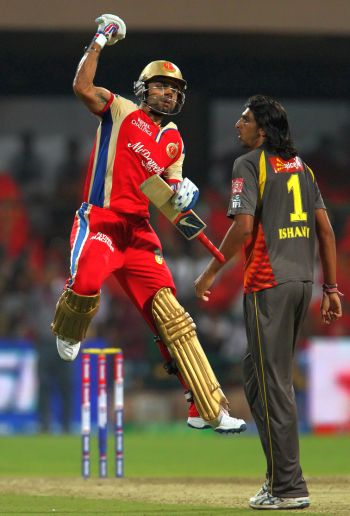 He had a partnership of 66 with Moises Henriques (7) for the fourth wicket but it was Kohli who was in complete control as he paced his innings in brilliant fashion.

The ploy to open the bowling with Hanuma Vihari failed miserably this time as Agarwal hit him for a four and six to get him out of the attack. The local boy then pulled Ishant for a six over deep fine leg to get 15 runs from the over.

But the youngster paid the price for being over aggressive as he mistimed a pull-shot off a back of length delivery from Perera which ballooned up for skipper Sangakkara to take an easy catch.

Ishant however got the big wicket of Chris Gayle (13) as he bowled one that moved a shade after pitching and the Jamaican nicked it to Parthiv Patel behind the stumps.

Kohli's first scoring stroke was six over mid-wicket off Perera. Along with AB de Villiers, he added 49 runs but the South African failed to clear the fence off a rank long hop from leggie Cameron White as gave a simple catch to Hanuma at deep mid-wicket fence.

Kohli, however played his free-flowing natural game to complete 50 off 31 balls as he punished the loose deliveries at will. He got an able partner in Moises Henriques who did nothing flashy as he quickly gave the strike back to his captain.

White and Perera added 80 runs in only 7.2 overs to take the new IPl franchise to a comfortable position. While White clobbered three fours and three sixes in his 34-ball-52, Perera hit four huge sixes and a four in his knock of 40 which came off only 24 balls.

The last six overs of the innings produced a whopping 77 runs as Sunrisers had scored only 84 in their first 14 overs.

The duo came together in the 11th over with the scoreboard reading 62 for three. They didn't take risk initially but created a launchpad for a furious assault on the RCB bowlers.

The turning point was the 16th over of the innings bowled by Moises Henriques that yielded 18 runs. The two bowlers who came out unscathed from the Perera-White onslaught were veteran spinner Muttiah Muralitharan (1/23) and India discard Rudra Pratap Singh (3/27) who gave away only 50 runs in their 8 overs taking four wickets between them.

The bowler who went for maximum was Ranganath Vinay Kumar who gave away 43 in his four overs. Normally, considered as a safe bet in T20 matches, Vinay Kumar's length deliveries were sent soaring into the stands by Perera.

The start wasn't a good one for the home side as they lost Akshath Reddy (12) caught by Vinay Kumar at the edge of the circle at mid-off RP's bowling.

Parthiv Patel (20) was sent back by Murali who foxed the left-hander with a doosra.

Sangakkara scored 23 off 24 balls before he was caught by Virat Kohli at cover when he tried to get a move on as Perera and White joined hands for a splendid partnership. 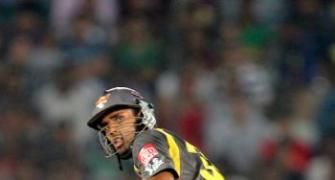 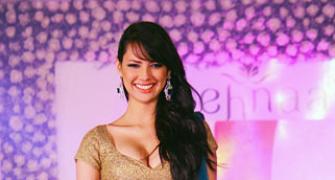 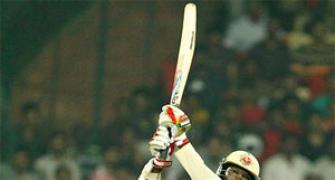 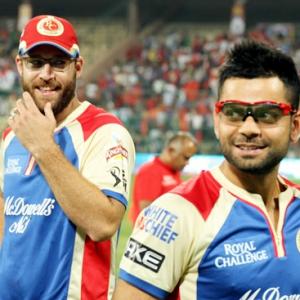 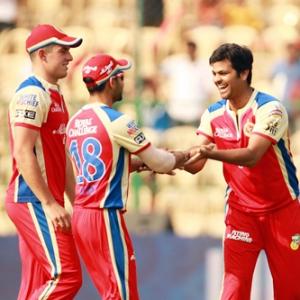