Power outage at Eden, Rana blames his dismissal on it 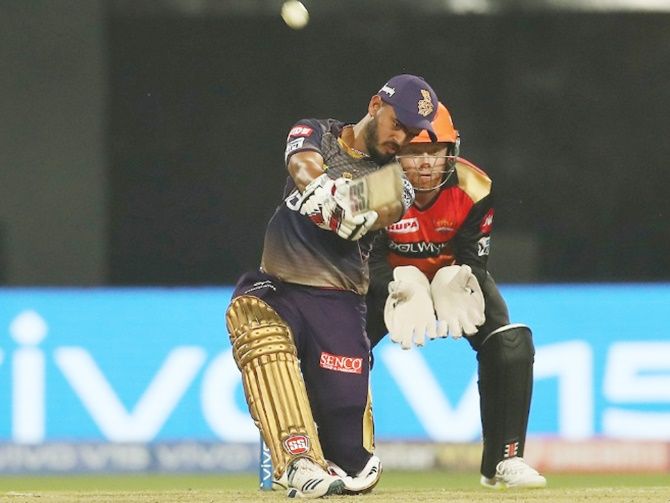 Kolkata Knight Riders' opening Indian Premier League fixture against Sunrisers Hyderabad, on Sunday, was halted for 12 minutes after one of the floodlights tripped due to a short circuit and home side batsman Nitish Rana blamed his dismissal on the power outage.

The incident happened at 7.18 pm when Sunrisers' Rashid Khan was about to bowl his third delivery of the 16th over to Nitish Rana who was batting on 68 then.

"I didn't know this could happen. My gameplan suddenly got interrupted. I lost my momentum when I came to the dressing room. The atmosphere also became a bit relaxed. I got into the shell because of the break. I could have finished the match if the break was not there," Rana said at the post-match press conference after KKR's six-wicket win.

With Sunil Narine suffering a finger injury, Rana was promoted to open with Chris Lynn and he kept KKR in the hunt before he was trapped LBW by Khan in the first ball he faced after the break.

"It's not a glitch actually. It was an eventuality which got rectified," Dalmiya said.

According to an official statement from the agency that controls the operation of the match, a short circuit happened in the E-Block Tower.

"There are 131 contactors in E-Block Tower for switching on 131 M Halide Lamps. Unfortunately contactor bearing No. 1-8 of Phase RB-1 got short circuited due to chance cause, which tripped the MCB system resulting in tripping of few lamps," the statement said.

"The matter was identified and corrective action was taken immediately thereby the system came back to normalcy," it added.

Eden Gardens had several instances of power failure in the past with the last being during a match between New Zealand and Bangladesh in the World Twenty20 in 2016.

The fourth ODI between India and Sri Lanka on December 24, 2009 was also halted due to power failure, causing a delay by 23 minutes.

Power failure had also happened during an IPL match in 2008 between Deccan Chargers and KKR.