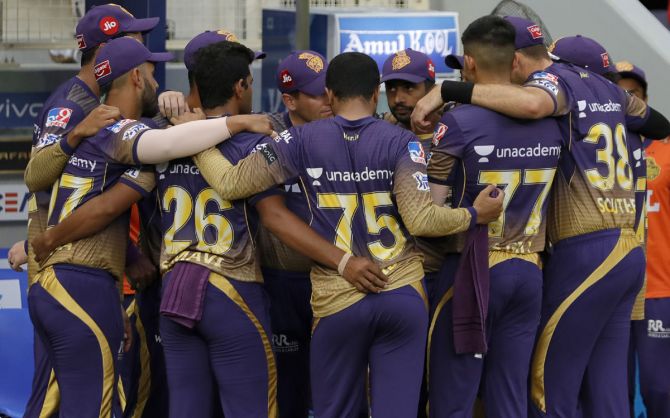 IMAGE: With 12 points from 13 matches, Kolkata Knight Riders are currently fourth in the standings, just ahead of defending champions Mumbai Indians on net run-rate. Photograph: BCCI

Two-time champions Kolkata Knight Riders would strive for a handsome win over struggling Rajasthan Royals in their last round-robin game to stay ahead in the IPL play-offs race in Sharjah on Thursday.

With 12 points from 13 matches, KKR are currently sitting at the fourth position in the pecking order, just ahead of defending champions Mumbai Indians on net run-rate.

MI also have 12 points from 13 games and still have a match to play against bottom-placed Sunrisers Hyderabad on Friday.

If both KKR and MI win their last matches, then it will boil down to net run rate and that's where the Eoin Morgan-led side (0.294) would have an edge as it currently enjoys a positive run rate compared to the Mumbai outfit (-0.048).

KKR had a mixed bag in the second leg of the tournament so far, winning four and losing two games.

While KKR started the second phase with back-to-back wins over Royal Challengers Bangalore and MI before suffering a defeat to Chennai Super Kings, they bounced back to beat table toppers Delhi Capitals. 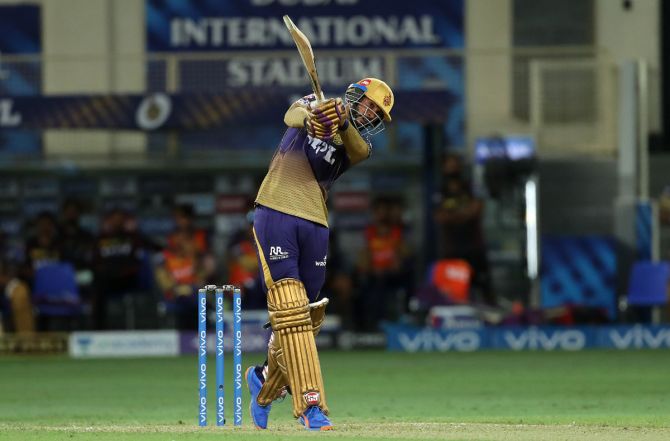 IMAGE: In the batting department, Venkatesh Iyer has been the star performer for KKR in the second leg of IPL in the UAE. Photograph: BCCI

A defeat against Punjab Kings followed before they outplayed Sunrisers by six wickets to keep their nose ahead in the race for the final play-offs spot.

KKR have been impressive in the second half and even their two defeats were narrow, where they lost in the last over.

In the batting department, Venkatesh Iyer has been the star performer for KKR in the second leg of IPL in the UAE, while Rahul Tripathi too has been impressive this season.

Young Shubman Gill scored a fine half-century in KKR's last match, which holds good for the team. Nitish Rana, up in the batting order, has also done well but the form of skipper Morgan remains a cause for concern.

The induction of star Bangladesh all-rounder Shakib al Hasan in the last match for the first time in the second leg, has given a new dimension to the side.

In the bowling, mystery spinner Varun Chakravarthy has been the team's go-to man while Sunil Narine also has been among the wickets.

In the absence of Andre Russell and Lockie Ferguson, who missed a few games following injuries, Tim Southee and Shivam Mavi are the new pace bowling pair for KKR.

Pacer Prasidh Krishna did well to snap four wickets in the matches that he had played, before being dropped for conceding 22 runs in the 19th over against Chennai Super Kings.

Royals are out of the race, languishing at seventh spot in the eight-team standings with 10 points from 13 games.

And come Thursday, Royals would look to dent KKR's hopes and end their campaign on a positive note.

With Mustafizur Rahaman as their most experienced overseas signing and young Chetan Sakariya in the ranks, Royals' bowling is a bit thin on experience.