Kings XI Punjab batsmen complemented a fine display by their bowling colleagues as they scored an easy five-wicket victory over Delhi Daredevils in their Pepsi Indian Premier League (IPL) match in New Delhi, on Tuesday.

The KXIP bowlers restricted the Delhi side to a meagre 120 for seven after putting the home side in and then their batsmen chased down the target with three overs to spare in a match that produced few exciting moments at the Feroze Shah Kotla stadium.

None of the visiting batsmen scored big but most of them made small contributions to chase down the small target.

David Miller top-scored with an unbeaten 39-ball 34 while opener Mandeep Singh chipped in with a 15-ball 24.

KXIP's run chase was built on the rollicking 44-run stand for the second wicket between Mandeep and Luke Pomersbach (18) from just 4.1 overs. Though KXIP lost two quick wickets after the initial burst, the small total meant that they romped home easily as they reached 121 for five in 17 overs. 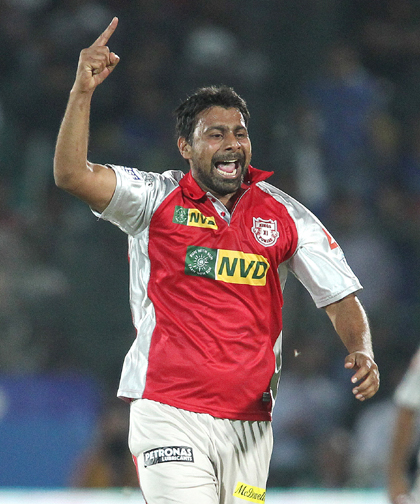 KXIP's second consecutive win took them to eight points from seven matches to remain at fifth place in the table while Delhi languished at the bottom with their seventh loss in eight matches. Delhi will now need to win all their remaining matches to have a chance of making the knockouts.

It was, however, another bad day for Kings XI Punjab captain Adam Gilchrist who continued with his woeful form in the tournament. He failed yet again as he was dismissed by Irfan Pathan for just six in the third ball of his side's run chase.

But the other opener, young Mandeep, continued from where he had left in theri last match against Pune Warriors, as he dealt in boundaries. He hit Ashish Nehra for three fours in successive balls in the second over and then gave the same treatment to Pathan with two boundaries in the next over as KXIP raced to 50 in the fifth over.

But two wickets -- in the form of Pomersbach and Mandeep -- in two balls suddenly led to the game coming to life as KXIP were reduced to 51 for three at the end of five overs.

Pomersbach charged down the track Roelof van der Merwe delivery but was beaten and bowled while Mandeep was run out by David Warner.

The two quick jolts forced KXIP to slow down with Miller and Manan Vohra (8) playing cautiously as they scored in singles to preserve wickets. Vohra, however, perished while playing an unnecessary shot as he tried to slog sweep Johan Botha only to get the top-edge of his bat and was caught by the bowler.

The small target and the initial burst from Mandeep and Pomersbach still gave advantage to KXIP as they reached 77 for four at the halfway stage.

Miller and David Hussey (20) then stitched 40 runs from 6.3 overs through mostly singles to take their side closer to victory. When Hussey was out in the 16th over, KXIP needed just 11 runs from 4.1 overs.

Earlier, Delhi failed to make an impact as a batting unit as they scored a paltry total after being put in to bat.

After their crushing victory over heavyweights Mumbai Indians on Sunday, much was expected from the home side batsmen but they could only post a small total.

Warner top-scored with a 36-ball 40 while Virender Sehwag, who hit a match-wiining 95 not out against Mumbai, contributed 23 off 21 balls. Delhi never had a substantial partnership as they lost wickets at regular intervals.

Delhi made a disastrous start as captain Mahela Jayawardene (4) got out in the fourth delivery of the innings while trying to drive an outswinger bowled by Praveen Kumar for David Hussey to take an easy catch at wide slip.

Roelof van der Merwe (8) was promoted up the order but he did not last long as his innings ended after facing just nine balls. The South African's mistimed shot off Parvinder Awana ballooned in the air after finding the top edge of his bat for Mandeep to take an easy catch at cover.

At 22 for two in the fourth over, Delhi were on the backfoot and much was expected from Sehwag's blade. But it was not to be Sehwag's day as, after hitting Harmeet Singh for a four and six off consecutive balls in the fifth over, he drove the same bowler in the air for Mandeep to take a fine catch at the extra cover region.

At the halfway stage, Delhi were 54 for three and Kings XI Punjab skipper Gilchrist's ploy of putting the opposition in seemed to be working fine.

Warner was in a punishing mood as he clobbered leg-spinner Piyush Chawla for a six and two fours to take 16 runs from the 11th over.

But just as the duo of Warner and Manprit Juneja looked like settling down for a big stand, the latter was out in the 14th over after a partnership of 39 runs in 6.3 overs. Three balls later, Kedar Jadhav (0) became Harmeet's third victim and Delhi were 85 for five in the 14th over.

Johan Botha (1) departed soon before Warner became Praveen's second victim in the 18th over as Delhi failed to give the final thrust to put up a challenging total. They could score just 30 runs from the last five overs.