Statistical highlights of the IPL match played between Rajasthan Royals and Chennai Super Kings in Jaipur on Thursday.

# Suresh Raina is the leading fielder with most catches in the IPL -- 38 in 75 matches.

# Siddharth Trivedi, with 11 wickets at 27.18 runs apiece in 11 matches, is the top wicket-taker for Rajasthan in the present competition. 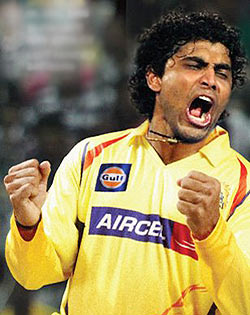 # Murali Vijay has been a complete failure in the present tournament, averaging 10.75 -- his runs tally being 86 runs in eight innings, including two ducks.

# In his last 13 innings in the IPL, Suresh Raina is without a fifty.

# In 13 matches only four half-centuries have been recorded for Chennai Super Kings in the IPL 5 -- 3 by Du Plessis and one by Badrinath.

# Praveen Kumar had also recorded an economy rate of 2.00 in the present tournament -- 4-0-8-0 for Kings XI Punjab against Bangalore at Bangalore on May 2.

# Hilfenhaus has fetched his first Man of the Match award  in the IPL.

# Chennai have won six and lost six out of 13 played in the present competition (NR 1).

# Yo Mahesh (2/21) posted his best bowling figures in the present competition.