No links with Dawood, this is a false case just to implicate me: Chandila

Suspended cricketer Ajit Chandila, arrested in connection with the IPL spot-fixing scandal, on Monday claimed in a Delhi court that he has been "falsely implicated" in the case and there was no evidence of his alleged links with either underworld don Dawood Ibrahim or Chhota Shakeel.

Arguing on the bail plea of Chandila, who is presently in judicial custody, his counsel told the court that his client was a "successful cricketer" and the police has not been able to place any evidence that he was having any common intention to commit such crime.

"There is no link with the alleged perpetrators that is Dawood Ibrahim and Chhota Shakeel...I am a sportsperson. Two of the other sportsperson (S Sreesanth and Ankeet Chavan) have been granted bail. I was playing for Rajasthan Royals. I am a successful cricketer.

"They are falsely implicating me. I was performing well. This is a false case just to implicate me," advocate Rakesh Kumar, appearing for Chandila, told Additional Sessions Judge Dharmesh Sharma.

The arguments were advanced when the court was hearing the bail pleas of nine arrested accused, including Chandila, who are presently in custody. 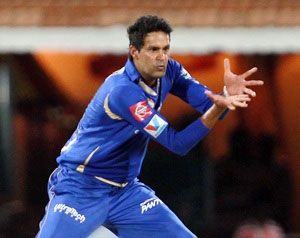 During the arguments, Chandila's counsel told the court that provisions of stringent Maharashtra Control of Organised Crime Act (MCOCA) were "mischievously added" by special cell of Delhi police against the accused so that they cannot get bail in the case.

His lawyer argued that police was not able to satisfy another trial court, which had granted bail to 18 accused in the case earlier, as to how provisions of MCOCA were invoked.

Public prosecutor Rajiv Mohan would advance his arguments on the bail pleas on August 30, the next date of hearing.

During the arguments, senior advocate Hariharan, who appeared for Chandresh Jain, claimed there is no evidence that his client was "Jupiter" and he was arrested on the basis of the statements of two arrested accused.

"The charge sheet does not show any call from me (Jain) to these alleged members of the syndicate who are in Pakistan or Dubai," Hariharan said, adding it was a "fictional story" on the basis of which Jain was arrested.

He also said that there was no link of any "nexus" between Jain and other members of the alleged syndicate.

"The whole case of fixing is based on some overs bowled by some bowlers. This is very strange. They (police) are not considering that there are 11 players on the field...Who
cheated whom here? Who is the victim?," he argued.

Similarly, the lawyers appearing for other seven accused also said that police has wrongly invoked the provisions of MCOCA in the case. They also argued that accused be granted bail on the ground of parity as 21 others are out on bail.

The police had filed the 6,000-page charge sheet against 39 persons out of which 21 are out on bail, nine are in jail and the remaining nine are absconding. Chandresh Jain, the 40th accused, was arrested after filing of the charge sheet in the case.

The police had in its charge sheet said Dawood and Chhota Shakeel, who have been "controlling the fixing and betting market" in cricket in India, were behind the IPL spot-fixing.

It had named Rajasthan Royals' captain Rahul Dravid as a witness in the case along with others.