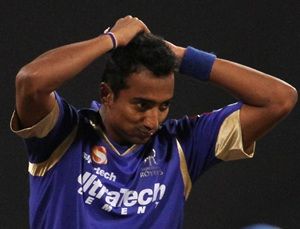 Chavan was cleared of criminal charges by a Delhi court last month in the spot-fixing scandal which rocked the sixth edition of the Indian Premier League in 2013. Chavan along with his Rajasthan Royals team mates Shantakumaran Sreesanth and Ajit Chandila were arrested by the Delhi Police in May 2013 in the middle of the IPL.

Shelar said the MCA would not stand by a player found guilty under the BCCI's anti-corruption code.

"Ankeet Chavan, who has been cleared of MCOCA (Maharashtra Control of Organised Crime Act) charges, requested us to convince BCCI to lift the ban on him. But the BCCI has already sent a mail to MCA clearing the factual position on this issue," Shelar said.

"The MCA has therefore decided that it would not challenge BCCI's action against Ankeet which was taken as per the disciplinary committee code and the anti-corruption code. So, we have rejected his request. We unanimously decided that the action against such a player should continue because the court ruling is only on MCOCA. The player has not challenged the BCCI's ruling so how can we?" he added.

The BCCI wants its headquarters, currently based in Wankhede Stadium in South Mumbai, to be shifted to Mumbai Cricket Association (MCA)-owned ground in the suburban Bandra Kurla Complex (BKC).

The MCA has decided to accommodate the request for a BCCI centre at the requested place.

"BCCI has requested MCA because we are close to the airport. MCA will allow for a BCCI centre in BKC," he said.

Besides, the MCA has also decided to accommodate its managing committee members in the Wankhede's presidential box which would be extended to 200 more seats.