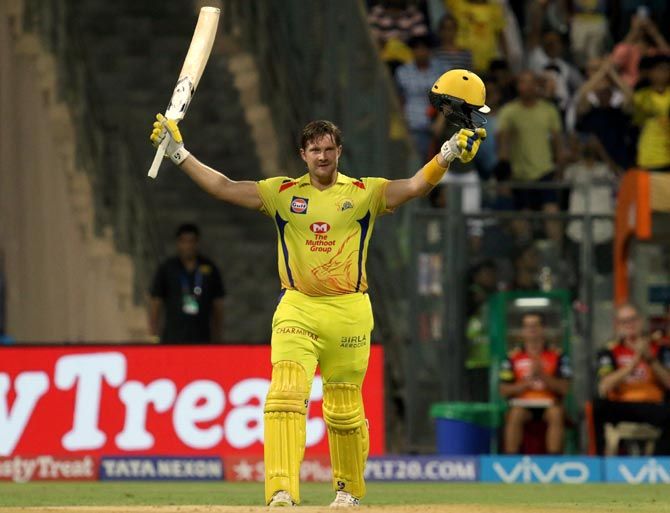 Reinstated into the IPL after a two-year ban for their team management's role in the 2013 spot-fixing scandal, CSK outplayed SRH by eight wickets with Watson's unbeaten 117 off 57 balls in a high-pressure game being the icing on the cake. The Australian smashed as many as 11 fours and eight sixes enroute to this second hundred of the season as CSK raced home in 18.3 overs. Put into bat, SRH had posted a challenging 178 for six courtesy of captain Kane Willamson's fluent 47 off 36 balls and Yusuf Pathan's late attack, as he blasted 45 not out from 25 balls.

Watson shared a 117-run partnership with Suresh Raina (32 off 24) for the second wicket, to lay the perfect foundation for CSK's easy run chase.

Such was Super Kings' domination over an otherwise formidable SRH that they beat the Willamson-led side four times in as many games this season. 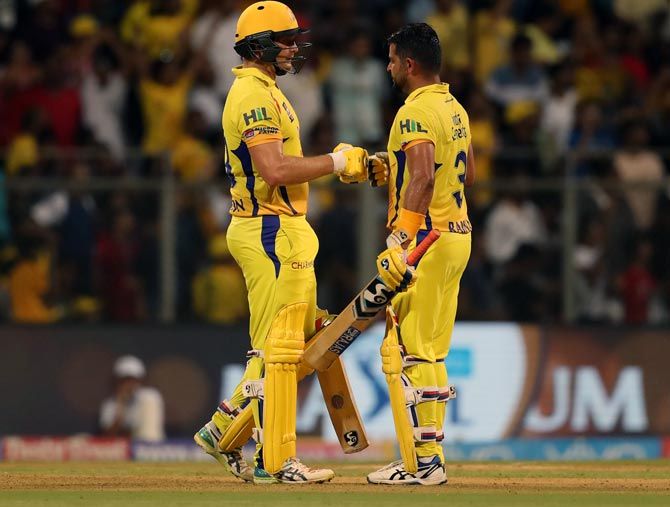 The Mahendra Singh Dhoni-captained side had entered a seventh IPL final and their stellar campaign ended with a record equalling third title, level with Mumbai Indians.

The star of the night was no doubt Australia's veteran all-rounder Watson. The 36-year-old, who previously won the title with Rajasthan Royals in the league's inaugural season in 2008, started off slowly as he took 11 balls to get off the mark. Once he got his eye in, he muscled his way to 50 from just 33 balls and then smashed Sandeep Sharma for 26 runs in the 13th over to swing the game in CSK's favour before he raced to his century from just 51 balls.

It was not surprise that he ended with 555 runs in the season including two hundreds and as many half-centuries. 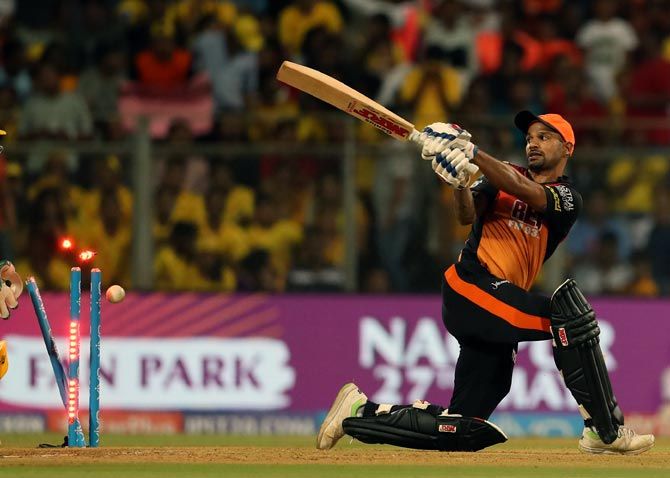 Earlier, Kane Williamson missed out on yet another fifty in a highly successful season as Sunrisers Hyderabad piled on a challenging score of 178 for six.

Williamson led his side from the front once again to notch up 47 in 36 balls, hitting two sixes and five fours before Yusuf Pathan scored a breezy unbeaten 45, inclusive of four fours and two sixes in 25 balls, to take the team close to 180.

Carlos Brathwaite hit a quickfire 21 from 11 balls to provide the boost at the end. 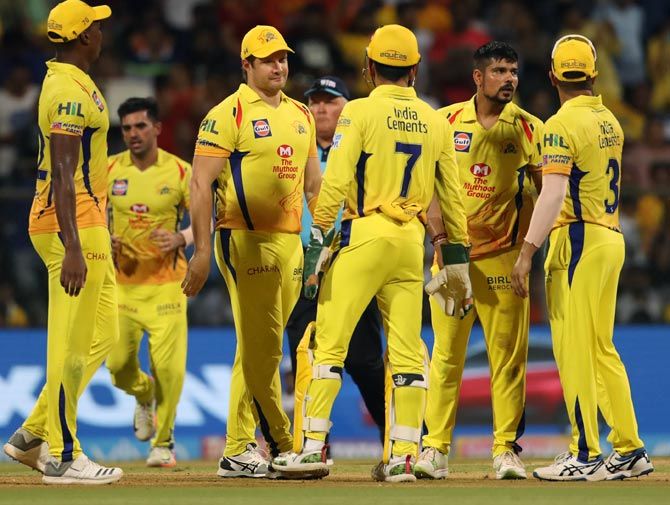 CSK's bowlers kept a tight rein on the Sunrisers batsmen initially while also taking a wicket through a run-out as Sreevats Goswami departed cheaply. The first four overs saw only one boundary being hit – a turn to fine leg for four by Dhawan off Lungi Ngidi.

The fall of the early wicket and a maiden over bowled to Sunrisers captain Kane Williamson by Ngidi kept the score down to 17 for one from four overs.

Deepak Chahar, who was bowling well till then, dug in one short to Williamson in the fifth over who smacked it for a six over long leg and then was pulled for a four by the New Zealander.

And when Shardul Thakur too erred in length, he was hoisted over long on by Dhawan for a maximum, taking SRH to 42 for one in six overs, at the end of Powerplay. 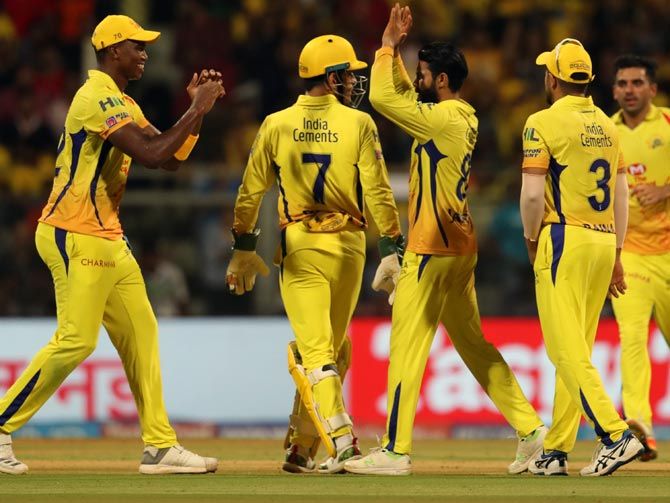 Williamson, by now into the groove, drove and scooped Dwayne Bravo for a four and a six in the bowler's first over, and the eighth overall, to increase the run-rate further.

The second wicket partnership reached the 50-mark when it was snapped by Ravindra Jadeja who bowled Dhawan when the left-handed opener missed a heave on the 25th ball he faced.

The run-rate dropped a bit after his departure and at the half-way mark Sunrisers were 73 for 2.

The promoted Shakib Al Hasan hit the accurate Jadeja for a six and a four to the mid-wicket region after Williamson's leading edge ran away to the boundary with 17 runs coming from the left-arm spinner's over to boost the run rate.

Williamson struck Bravo for consecutive fours in the 12th over and was well in sight of his ninth half-century of the season when Dhoni brought back Sharma who lured him out with a wide ball and got him stumped him off the first ball of a new spell.

The Sunrisers captain, by far his side's major run-getter who also became the third highest scorer in one IPL season, went back after striking two sixes and five fours to leave his side at 101 for three. 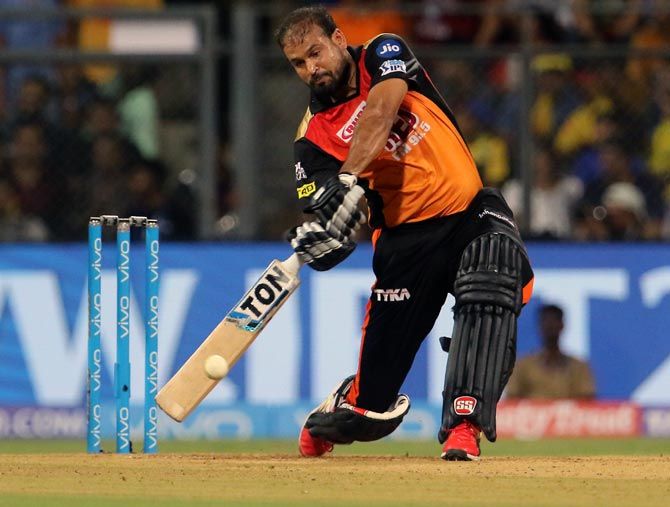 Pathan started in aggressive fashion and put on a useful stand of 32 with Shakib before the latter drove Bravo straight to Raina at extra cover and was caught.

It was later left to Pathan and big-hitting West Indian Brathwaite to give the total a big boost in the death overs as they added 34 runs in the last three overs.