Kevon Cooper bowled a brilliant final over to guide Rajasthan Royals to a five-run victory over Delhi Daredevils in a thrilling Pepsi IPL league encounter in New Delhi, on Saturday.

Chasing a victory target of 166, Delhi batsmen failed to get 17 runs off the final two overs to finish at 160 for six at the Feroze Shah Kotla.

David Warner's smashing innings of 77 went in vain as the home team lost their second match in a row, having lost to Kolkata Knight Riders in their tournament opener.

Needing nine runs from the final over, Cooper bowled a tight line conceding only three runs as Delhi lost the wicket of Andre Russell and Johan Botha. 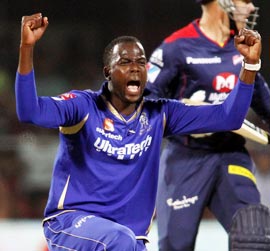 A six off the final delivery was all that Delhi required but Cooper kept it fuller as Naman Ojha failed to connect the ball.

The match, which seemed to have slipped out of the hands of the Royals, was turned on its head by Australian Brad Hodge whose brilliant piece of fielding led to the dismissal of Warner.

Warner, who till then looked like anchoring the Daredevils chase to perfection, was run-out in the penultimate over as he failed to beat a direct throw from Hodge who was manning the cover region. Such was the effect of that dismissal that Daredevils completely lost the plot during the final nine deliveries of the match.

Warner hit nine fours and a big six off Siddharth Trivedi in his 56-ball knock. He shared an important 67-run third wicket partnership with young Manprit Juneja (20) as the home team did not look like facing any major hiccups in the chase.

But, when it mattered the most, unheralded Rahul Shukla and Cooper did simple things admirably well to help their team start off on a winning note.

Dravid (65) was ably supported by all-rounder Stuart Binny (40) but Daredevils pacers Umesh Yadav (4/24) and Ashish Nehra (2/35) bowled well at the death as the visitors lost four wickets in the space of eight deliveries with the addition of only four runs.

Dravid's knock came off just 51 deliveries and was inclusive of six four and two sixes.

The Royals got off to a brisk start with a new opening pair of Ajinkya Rahane and Sri Lankan wicketkeeper Kusal Perera.

Making his IPL debut, Perera came out to bat with an attacking intent and smashed the second ball of the innings for a boundary.

Perera had a lucky escape in an eventful third over of the innings bowled by Umesh Yadav. He was dropped on five by Johan Botha at the first slip off the bowling of Yadav.

The Sri Lankan then hit two successive fours in the same over but playing too many shots brought the downfall of the left-hander as he tried to lift the final delivery from Yadav over the field but ended up giving a simple catch to Irfan Pathan at extra-cover. He scored 14 off 12 balls and hit three fours.

At the other end, Rahane got off the mark with an exquisite on-drive to the mid wicket fence. Rahane hit Andre Russell first over his head followed by a deft touch to the third-man boundary, in two successive deliveries, giving us a glimpse of his top form last season.

Rahane scored 28 in 24 balls before being dismissed by left-arm spinner Shabaaz Nadeem.

All rounder Stuart Binny got off to a blazing start, hitting Johan Botha for two sixes and a four in his first over. Binny's knock came of just 20 balls and provided Royals the impetus to post a competitive total on a good batting track at the Feroze Shah Kotla.

His knock was laced with three sixes and two fours. 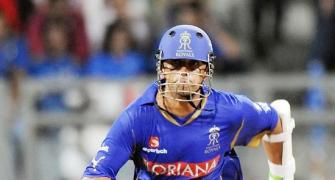 How different is Dravid's captaincy from Warne's?
Injured Sehwag ruled out of second match 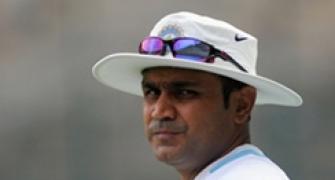 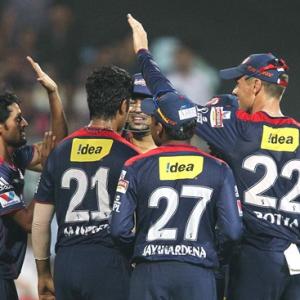 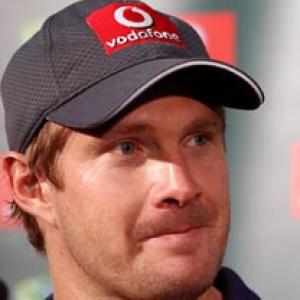