A six-member team of Delhi Police's Special Cell on Saturday raided tainted cricketer Ajit Chandila's residence in Prahladpur in Haryana for further clues on the IPL spot-fixing issue that has led to the cricketer's arrest.

The Police team arrived at his house around 2 pm local time with the search warrant but except for a few relatives, no one else was present at the house.

- IPL to go on, need to weed out corrupt: Shukla

It is learnt that one of the relatives informed the police authorities that Chandila's elder brother Subhash is unwell and has been admitted to a city nursing home where the family members had gone to visit him. 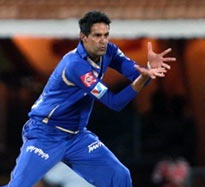 The police team had a female cop too, who waited inside the residence for around 45 minutes for the family members to arrive.

The other cops then questioned the neighbours as well as the relatives to get detailed information about each and every family member.