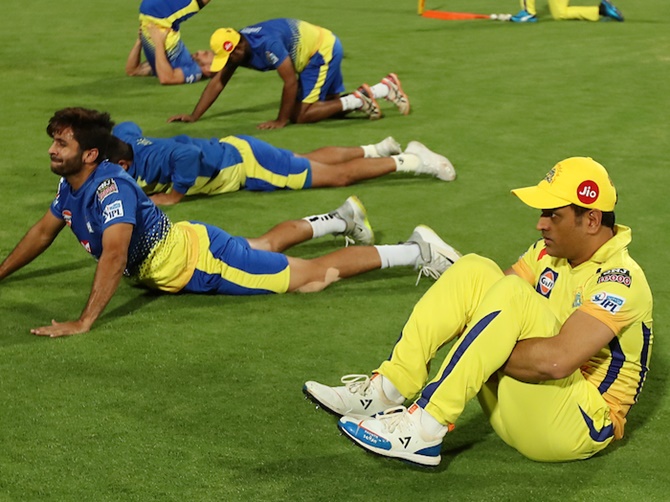 IMAGE: A win will almost ensure a play-off berth for CSK. Photograph: BCCI

The wretched form of Chennai Super Kings' top three will be primary worry for Mahendra Singh Dhoni as Chennai Super Kings aims to arrest the mini-slide when they take on Sunrisers Hyderabad in an Indian Premier League encounter, in Chennai, on Tuesday.

If CSK's problem is the non-performance of the top-order, Sunrisers Hyderabad's issues are that there are no performers in the middle-order with bulk of the runs being scored by openers David Warner (517 runs) and Jonny Bairstow (445 runs).

A win will almost ensure a play-off berth for the defending champions, who lost back-to-back away matches against Sunrisers Hyderabad and RCB respectively.

While Dhoni's Herculean effort to pull off another miraculous chase has been the talking point, it is difficult not to shed light on the poor show of CSK's top three which is putting the skipper under unimaginable pressure.

Last season's hero Shane Watson (147 runs), Ambati Rayudu (192) and Suresh Raina (207) haven't lived up to expectations. The pressure has been entirely on Dhoni, who leads the charts with 314 runs and the batting unit needs to step up.

Back at its den after a schedule of away games, Dhoni's men will be slight favourites as it will be Bairstow's last game for the last year's runners-up as he heads back to England for World Cup preparations.

The Chepauk pitch has been sluggish in the games played so far and coach Stephen Fleming attributed it to being one of the reasons for top-order's poor show.

"We played on Chennai tracks, where it is little bit difficult to find form. We are being little bit reckless and that comes about from guys who want to find form and do the job, but what is happening is we are relying heavily on Dhoni and Rayudu to patch things up and we won't win the competition if this continues," Fleming sounded a warning.