Mahendra Singh Dhoni led the way with a typically aggressive half-century to power Chennai Super Kings to a 33-run win over Delhi Daredevils in Chennai on Tuesday and brighten their prospects of securing a top-two finish ahead of the play-offs of the Pepsi Indian Premier League.

Electing to bat first, Chennai rode on Dhoni's 35-ball unbeaten 58 to post a competitive 168 for four. Albie Morkel (3/32) then spearheaded a disciplined bowling effort to restrict Delhi to 135 for nine at the MA Chidambaram Stadium.

Mohit Sharma, Ravichandran Ashwin and Dwayne Bravo picked up two wickets each as CSK regained the top spot in the standings.

Dhoni smashed two fours and four sixes during his whirlwind knock and added 57 runs for the fourth wicket with Ravindra Jadeja. The captain was also involved in an unbroken 37-run stand with Bravo, which came off just three overs.

In reply, Delhi were off to a disastrous start as they lost the dangerous Virender Sehwag to Sharma off the second ball of the innings. 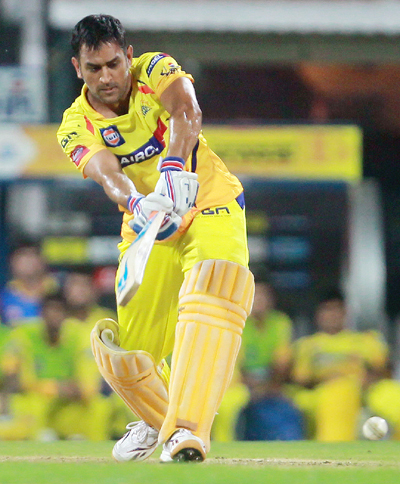 It was a short, wide delivery and Sehwag went for the cut only to get a thin edge through to the wicketkeeper.

There was a surprise at the top of Delhi batting order, with stand-in skipper David Warner (44) sending Johan Botha ahead of him.

Unmukt Chand and Botha added 34 runs for the second wicket, before the Delhi youngster was done in by a slower ball from Sharma. Chand had hit two fours and a six before attempting a slog-sweep that led to his dismissal.

Botha followed 15 runs later, top-edging a sweep off Ashwin. Next to go was Kedar Jadhav whose predetermined pull shot off Albie Morkel landed in Dhoni's gloves. The dismissal ended a horrible night for Jadhav, who dropped a catch and missed a run-out besides his failure with the bat.

Morkel then sent back Ben Rohrer in a soft dismissal to leave Delhi reeling at 63 for five in the 10th over.

Warner tried to offer resistance but the ever-rising required rate only added to Delhi's woes. As the visitors reached 100, they had a little under six overs to pull off a win. And the task got even tougher with Roelof van der Merwe getting out to Ashwin.

Earlier, Chennai were off to a sedate start with both openers Murali Vijay and Michael Hussey mixing caution with aggression in the early part of the innings.

Vijay was a bit lucky as he was dropped by Jadhav off Ashish Nehra in the third over.

The in-form Hussey hit Irfan Pathan for two successive fours to get a bit of momentum for the home team, before Vijay hammered Johan Botha for two fours and a six over long-on to set the ball rolling.

Luck was again on Vijay's side as he survived a run-out chance, Jadhav being his saviour again as he failed to dislodge with Vijay losing his bat and his feet in the air.

However, the Chennai player was not third time lucky as a diving Ben Rohrer flicked the ball onto the stumps catching Vijay short of the crease.

Two overs later, Umesh Yadav snared the big fish as he bounced out Hussey who top edged the pull and was caught by Virender Sehwag at short fine-leg.

Another danger man, Suresh Raina, soon made his way back to the pavilion after driving Roelof van der Merwe straight to David Warner at extra cover.

CSK however could take comfort from the fact that Dhoni was still there in the middle. And he didn't disappoint his fans as he played a few lofty blows to prop up the home side's run rate towards the end. 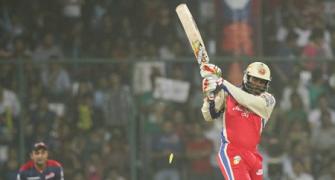 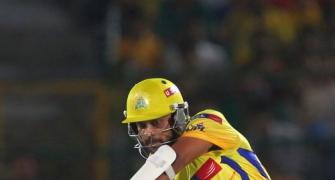 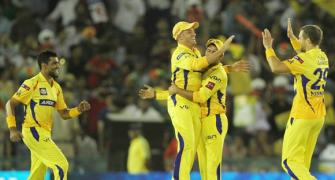 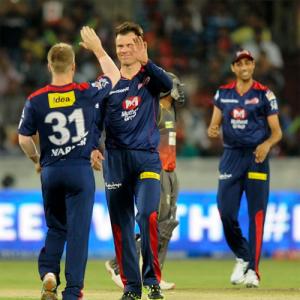 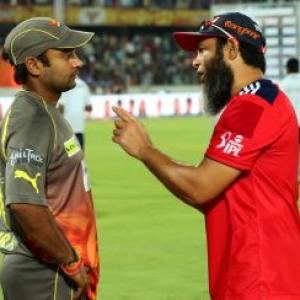 Spinners are playing a huge role in T20: Mushtaq Ahmed