Chasing a stiff 186 for win, Hussey made short work of Rajasthan's ordinary bowling attack and together with Suresh Raina (52 off 35) added 90 runs off just 61 balls for the second wicket to help Chennai overwhelm the target with a ball to spare.

After Murali Vijay's early dismissal, Raina provided Hussey the perfect company from the other end. The duo not only kept Chennai in the hunt but also set it up for Dwayne Bravo (15 not out off 9) to finish off the chase.

If it was all Watson show in the first session, Hussey enthralled the crowds in the second half with his brilliant 51-ball 88. 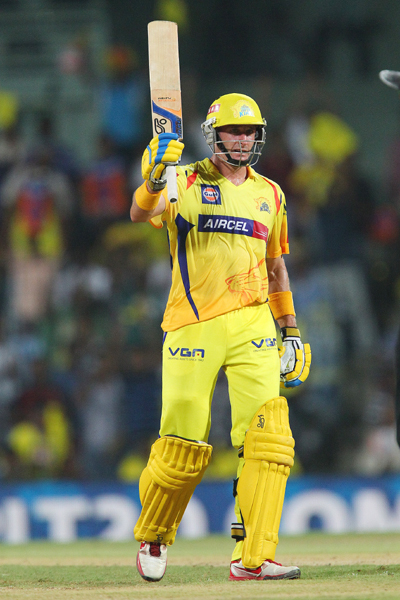 Hussey made his intentions clear from the start and in Raina's company kept Chennai in the hunt.

Both Hussey and Raina were aggressive in their approach and sent the Rajasthan bowling attack for a leather hunt to help Chennai reach 92 runs at the halfway mark.

Hussey scored his half-century off just 31 balls with the help of seven boundaries and one hit over the fence, while Raina reached the landmark in 33 balls and hit four fours and two huge sixes in the process.

James Faulkner (3/20) broke the partnership when he trapped Raina in front of the wicket.

Chennai were cruising along when Hussey and skipper Mahendra Singh Dhoni were at the crease but two wickets in the 17th over completely changed the equation.

After playing a fantastic knock, Hussey departed in the most unfortunate manner as he was caught short of the crease by Rahul Dravid's direct throw from point. And two balls later, Faulkner disturbed Ravindra Jadeja's timbers with an accurate yorker to check Chennai's progress.

With Chennai needing 11 runs off seven balls, Dhoni was caught at long-on by Stuart Binny off Faulkner to raise Rajasthan's hopes.

But it was not to be Rajasthan's day, as needing 10 off the last four balls, Bravo hit Watson for a huge six to seal the match in Chennai's favour.

Earlier, Watson (101 off 61) scored the first century of IPL 6 to single-handedly power Rajasthan to an imposing 185 for four.

Towards the end, Binny played a 22-ball unbeaten 36-run cameo to further help Rajasthan's cause.

Except for Ravichandran Ashwin (2/20), all Chennai bowlers went for runs as Watson started aggressively right from the word go. Apart from Ashwin, Bravo (2/36) also picked up two wickets for the hosts.

Riding on Watson's brilliant strokeplay, the Royals got off to a rollicking start after opting to bat. 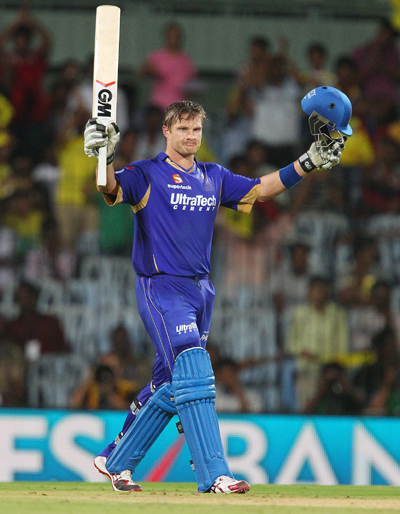 Watson went ballistic from the onset and slaughtered the Chennai bowlers, except for Ashwin, with consummate ease.

The Australian all-rounder did not let go any scoring chance as he punished anything that was bowled full or short to him.

Dravid too failed to make an impact. He was completely foxed by a slower delivery from Bravo and could only manage to lob a simple catch to Dhoni.

But the fall of wickets had little affect on Watson who went about his business in style. He was particularly severe on Jadeja as he clobbered the left-arm spinner for two sixes to pick up 18 runs off the 17th over.

Soon after notching up his 100 off just 60 balls, Watson perished in search of quick runs, caught by Hussey off Bravo.

But Binny, who struck three boundaries and a six, took over from where Watson left and used his long handle to great effect to help Rajasthan go past 180-run mark.