'It is not easy to play a long innings here. It takes a lot out of you to play in these conditions.' Mumbai Indians captain Rohit Sharma was all smiles after demolishing Kolkata Knight Riders in Wednesday’s IPL match in Abu Dhabi, before hastening to add that the hot and humid conditions in the UAE "takes a lot out of you".

Rohit starred with a 54-ball 80 to help defending champions Mumbai Indians to a 49-run win over the Knight Riders.

"It is not easy to play a long innings here (UAE). It takes a lot out of you to play in these conditions. Maybe I was a bit tired in the end and it was a lesson for us that one set batsmen needs to bat deep till the end.

"We've seen it in the past and that's what I tried to do," Rohit said at the post-match presentation ceremony.

During his stay in the middle, he played the pull shots to perfection and hit a couple of sixes.

"I back myself to play the pull shots and have practised quite a bit. Pretty happy with the performance of my squad. All my shots were good (laughs), can't pick one," he added. 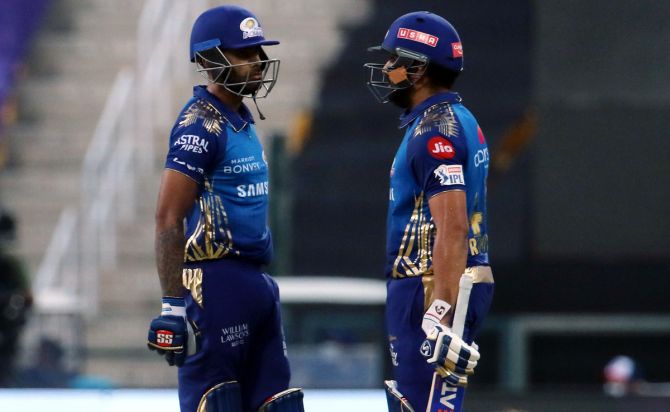 IMAGE: The 90-run partnership for the second wicket between Rohit Sharma and Suryakumar Yadav proved crucial in the easy win over Kolkata Knight Riders in Wednesday’s IPL match in Abu Dhabi. Photograph: BCCI/IPL

Talking about his bowling attack, he said it was set up keeping Mumbai's Wankhede stadium in mind.

"We never knew that the IPL would happen in the UAE, so we wanted a pace attack that was strong for the Wankhede. But the ball was seaming around for the first six overs over here as well.

"We haven't played much with Trent Boult and (James) Pattinson, but it was good that we were on the same page."

The result meant Mumbai Indians ended their winless streak in the UAE.

"Only two players from the squad that lost five matches here in 2014. It is all about executing plans, which we did," Rohit said.

"We were always ahead of the game, but it was all about being ruthless."

KKR skipper Dinesh Karthik said, "Pretty rusty day to be honest. Don't want to be too analytical about it. The boys know where they need to get better. Pat Cummins and Morgan just finished their quarantine today. So it is not easy to come in and play in this heat."

Boult also said he was not comfortable playing in these conditions.

"I wouldn't say I'm comfortable in these heat and conditions. It's a big challenge to bowl against the likes of Morgan and Russell but it's nice to come out on the winning side tonight.

"I have been bowling back in New Zealand and it's the winter there, that's been the biggest challenge but everyone is excited to have cricket around," he said. 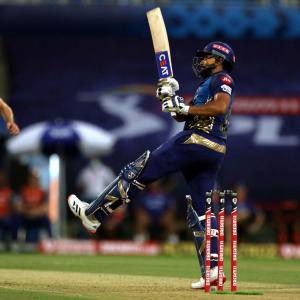