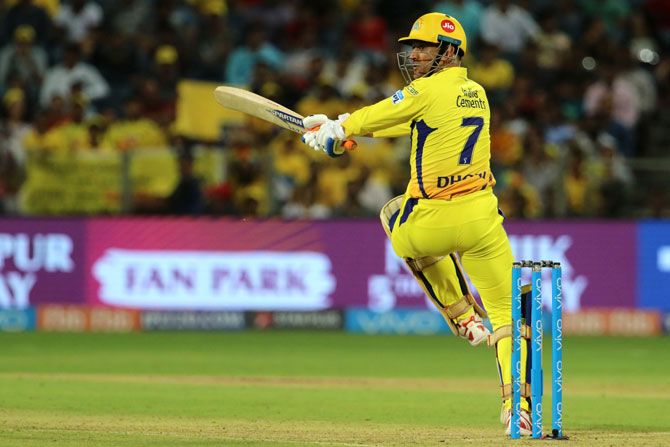 IMAGE: Mahendra Singh Dhoni has been in scintillating form this season. Photograph: BCCI

Former India batsman Aakash Chopra believes that Chennai Super Kings have the best batting unit in this year's Indian Premier League and the way their skipper Mahendra Singh Dhoni has rewound the clock is sensational.

"Chennai Super Kings is one side who are playing with only five batsmen and they are still good enough to score 200 runs nine out of 10 times. So they (CSK) currently is the best batting unit in the IPL," Chopra told PTI after launching the "Aakash Chopra Official App", in collaboration with US-based tech firm, EscapeX.

Chopra also said that he was pleasantly surprised with the way Dhoni has turned things around.

"I am pleasantly surprised. If you have asked me this question about year ago, I would have said, things are not looking great," said the 40-year-old former Delhi and India opener.

"He is taking too much time, may be T20 format is no longer his primary format because what he could do at 25, he is not able to do at 35. But then the way, he has turned it around, the second wind seems to be stronger than the first and he has rewound the clock. It is absolutely sensational," said the cricketer-turned-TV commentator.

Chopra also feels that the Kings XI Punjab, who are in the third position, have the best opening pair formed by West Indian Chris Gayle and K L Rahul, who are both in terrific form.

"Kings XI Punjab has the best and the most explosive opening combination. But the cream is at the top, there are serious issues to be addressed down (the order)," he said.

Coming to Mumbai Indians, who are languishing in seventh place, Chopra said it would be very tough for the defending champions to make it to the play-offs and he does not see it happening after Tuesday's defeat in Bengaluru.

"Till yesterday, I was very optimistic. After yesterday's loss (to Royal Challengers Bangalore), I am pessimistic. Six out of six will be very tough and I don't see that happening.

"It is a great side, but they have not clicked as a team. If they haven't clicked thus far, there is little chance that they will somehow get on the roll and win six (games) on the bounce. Now it is perhaps a bit too late," said the former batsman who had played in 10 Test matches.

The ex-cricketer's app will have content, contests and giveaways through the unique social feed that will enable the fans to directly interact with him.