MS Dhoni of Chennai Super Kings speaks with David Miller of Kings XI Punjab at the end of the match. Photograph: BCCI

Chennai Super Kings produced a clinical performance as they demolished bottom placed Kings XI Punjab by seven wickets to finish on top of the league table and qualify for the play-offs in the Indian Premier League in Mohali.

After restricting Kings XI Punjab to a none too impressive 130 for seven in 20 overs, CSK pair of Faf du Plessis (55) and Suresh Raina (41 not out) added 92 runs for the third wicket to lay the foundation of a victory that was achieved in 16.5 overs.

Du Plessis and Raina joined forces after CSK were put in a spot at 10 for 2 with both Mike Hussey (1) and Brendon McCullum (6) being dismissed cheaply.

By virtue of this victory, CSK finished their league engagements on top of the eight-team table with 18 points from 14 games, which can't be surpassed by any other team in the tournament.

Finishing on top of the table ensures that CSK will be playing the first qualifier and even if they lose will get another shot at summit glory facing the winner of the 'Eliminator' between teams placed third and fourth. 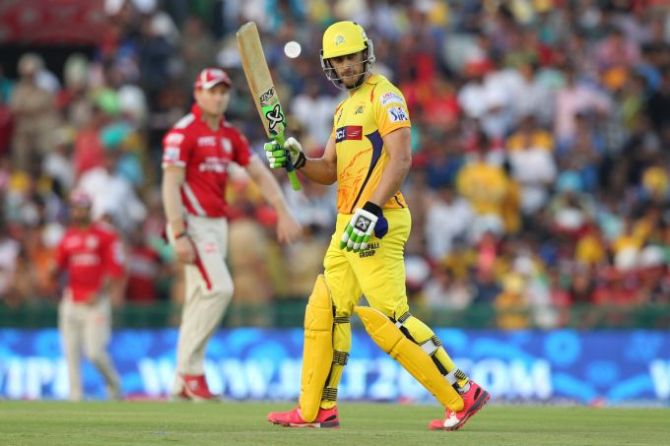 For Kings XI Punjab, it was the end of a rather forgettable season, where nothing went right for them. Last year's champions finished their campaign with six points from 14 encounters, losing 11 matches in all.

While Du Plessis hit five boundaries and a six in his 41-ball knock, the normally attacking Raina decided to play the role of an anchor as he guided the team to a comfortable victory. The UP left-hander's innings was studded with four boundaries.

Despite not hitting too many sixes, the Du Plessis-Raina duo scored the runs at a fair clip in only 11.3 overs before the South African was cleaned up by Rishi Dhawan.

CSK by then nearly pocketed the match and it was left to skipper Mahendra Singh Dhoni (25) to complete the formalities with some lusty hits. 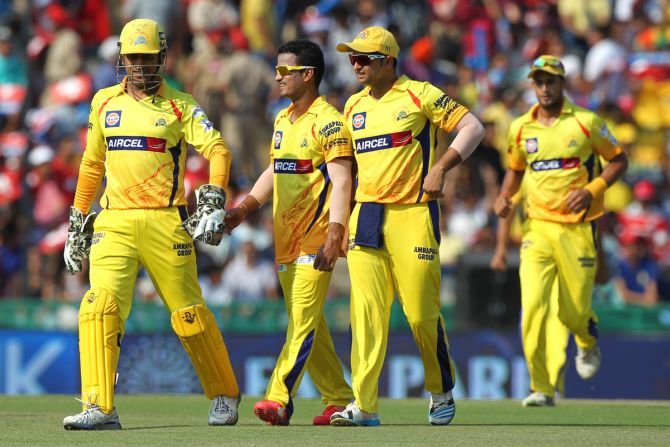 Earlier, having called it right at the toss, skipper George Bailey decided on making first use of the strip. Wriddhiman Saha (15) quickly hit a six and a four but diminutive left-arm spinner Pawan Negi cleverly tossed one outside off-stump which the India's Test specialist managed to hit it in the cover region.

The spin troika of Negi (2/25), Ravichandran Ashwin (1/14) and Ravindra Jadeja (1/18) gave away only 57 runs between themselves in the 11 overs that they sent down, snaring four wickets in the process.

Veteran Nehra (1/17) along with Ishwar Pandey (1/22) also did play their part effectively as KXIP batsmen hardly could get away. 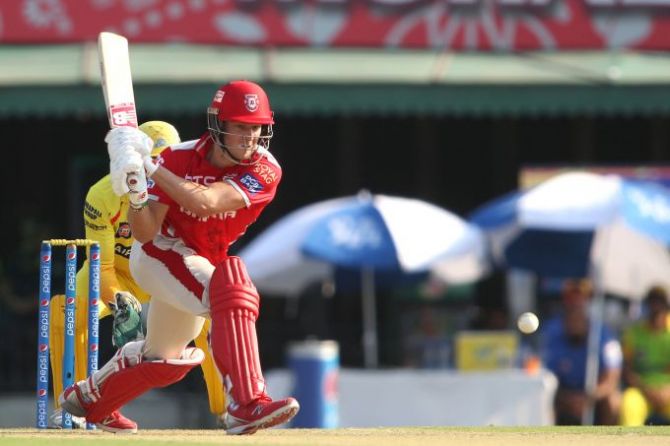 There was no partnership at the top of the order and the only notable stand came at the rear where Axar Patel (32) and Rishi Dhawan (25 no) added 44 runs but that proved to be too little at the end of it all.

Miller did salvage some pride for himself ending up as top scorer with 357 runs to his credit, while Bailey managed 259 runs from 13 games.