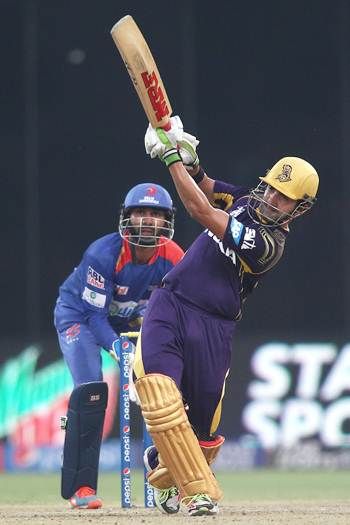 Skipper Gautam Gambhir came up with a solid 69 as Kolkata Knight Riders coasted to an eight-wicket victory over Delhi Daredevils in the Indian Premier League match at the Feroz Shah Kotla on Wednesday.

Chasing a modest 161 for victory, Gambhir and Robin Uthappa (47) put on a 106-run partnership to provide the perfect platform as Kolkata cantered to the target in 18.2 overs.

The duo started cautiously, but gradually gained in confidence and punished the Delhi attack, led by Mohammad Shami.

Gambhir picked a sliding leg-side delivery from Laxmi Ratan Shukla and dispatched it for a six over the mid-wicket region to make his intent clear in the fifth over of the innings, as the southpaw got his second half-century of the season.

Uthappa also showed his aggressive side against Jean-Paul Duminy, coming down the track against the South African off-spinner and hitting him for a huge six in the widish long-on region.

The duo grew in confidence with every passing delivery as Delhi skipper Kevin Pietersen kept juggling his bowling options.

South African left-arm pacer Wayne Parnell finally struck, denying Uthappa a fifty, as the Karnataka batsman was caught behind for 47 off 34 deliveries.

Manish Pandey (23 not out) then played the perfect supporting role to make sure that Kolkata did not repeat the Ahmedabad fiasco, where the team lost six wickets for two runs, eventually gifting the match to Rajasthan Royals.

On a day when nothing worked for Delhi and everything went in Gambhir's favour. The left-hander survived a drop catch and a run-out.

He was finally caught behind while trying to pull a rising Parnell delivery as Dinesh Karthik gloved a beauty in the 18th over. It was left to Kallis (10 not out) to complete the formalities.

With misfields galore, the Delhi fielders did little to help their tired-looking bowlers.

Earlier, electing to bat, Delhi did not have the best of starts, as the Kolkata think-tank changed bowlers at both ends to bottle up the flow of runs even as Quinton de Kock got a couple of boundaries.

Kolkata opened the bowling with off-spinner Suryakumar Yadav, who shared the new ball with Jacques Kallis.

Umesh Yadav drew first blood for Kolkata in the third over, having De Kock caught by Gautam Gambhir at mid-on for 10.

Pietersen (6) looked completely out of sorts in his short stay at the wicket and was circumspect against the spinners. The former England batsman was run-out while attempting a needless run.

Murali Vijay (24) and Karthik (36) then tried to stabilise the innings as Kolkata continued to juggle their bowling options. The duo added 31 runs for the third-wicket, mixing caution and aggression to give some momentum to the Delhi innings.

Trying to push the scoring rate, Vijay finally holed out a simple catch to Sunil Narine at long-on, as Kallis got his first wicket.

The hard-working Karthik continued to put runs on the board and gave Kallis a hard time, hitting Proteas medium-pacer for a six and two fours in the 11th over.

Kallis, though, had his revenge when he caught the Delhi batsman in the very next over off Shakib al-Hasan for 36.

The over-ambitious Karthik tried the paddle scoop again only to top edge the ball to short fine leg.

Laxmi Ratan Shukla and Duminy did try to up the ante but clinical bowling from Umesh and R Vinay Kumar kept the batsmen in check even in the middle overs.

Shukla’s exit though proved a blessing in disguise for Delhi as new man Jadhav smacked a four and a six off Vinay to provide some entertainment to the Kotla crowd.

Duminy and Jadhav entertained with fours and sixes and raised the run-rate to over 13 in the final four overs. 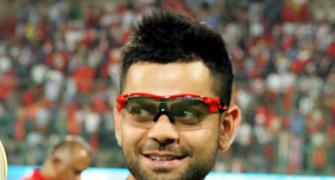 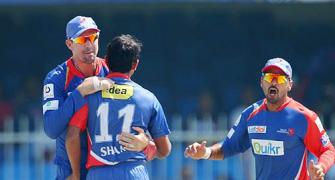 'In T20 cricket, rarely does a good ball gets the batsman out' 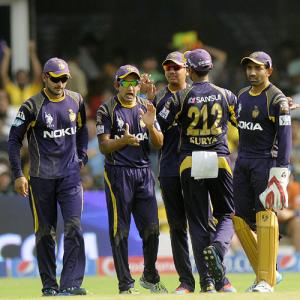