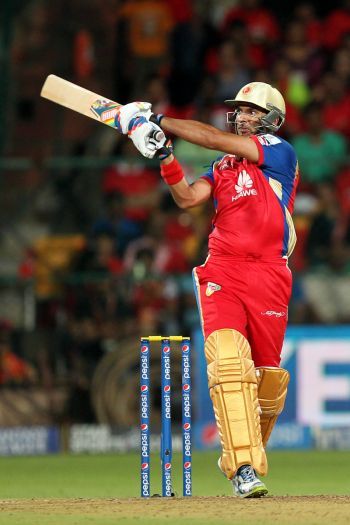 Star batsman Yuvraj Singh smashed a magnificent 68 not out in a stunning six-hitting exhibition to power Royal Challengers Bangalore to a 16-run victory over Delhi Daredevils in an IPL match in Bangalore.

The in-form Yuvraj, who had scored a brilliant 83 of just 38 balls against Rajasthan Royals, set the Chinnaswamy Stadium on fire as he hit nine sixes and a four off just 29 balls to single-handedly take his side to a formidable 186 for four after being put into bat.

Chasing a stiff 187 for a win, Delhi were restricted to 170 for seven in 20 overs to lose the match which started 70 minutes behind schedule due to light drizzle.

Coming out to bat at the 13th over at team total of 94/3, Yuvraj struck sixes almost at will towards the end of the innings after a slow start by his side. This was his third fifty-plus knock in 10 matches in IPL-7 as he signalled his return to his vintage form of the old after recent failures.

Yuvraj hit three sixes of successive balls off South African leg-spinner Imran Tahir to gather 21 runs from 17th over and then smashed a maximum each in the next two overs bowled by Mohammed Shami and Siddarth Kaul. He reserved his best for the last as he hammered Rahul Shukla for 27 runs in the final over, belting four consecutive sixes.

Delhi began their chase in the worst possible fashion as they lost both their openers Murali Vijay (1) and Quinton de Kock (6) inside the second over at team total of 10 for two.

Captain Kevin Pietersen (33) and Mayank Agarwal (31) briefly kept Delhi in the game with a 63-run stand for the third wicket from 7.2 overs before the latter was out. The match was as good as over when Pietersen was out in the 12th over off leg-spinner Yuzvendra Chahal as Delhi were reduced to 97 for four, needing 90 runs from eight overs.

Pietersen, who is yet to come up with a big score from his seven innings, hit two fours and a six in his 29-ball knock. He was foxed by Chahal with the turn, as a flatter and shorter delivery beat a charging-down Pietrsen for Parthiv Patel to do the easy stumping.

Dinesh Karthik (1) did not stay long at the crease as he followed his captain at the dressing room just an over later and though JP Duminy hit a six off Chahal soon after, Delhi needed to score 68 runs from the last five overs at an asking rate of 13 runs per over.

Duminy (48 off 30 balls) made a heroic effort along with Kedar Jadhav (37) but the South African's resistance ended in the 18th over and with it, the flicker of hope for Delhi to win also gone.

Delhi needed 26 off the last over bowled by Mitchell Starc and Jadhav hit a six off the first ball but they could score only nine runs from that over.

Veteran off-spinner Muttiah Muralitharan and pacer Mitchell Starc took two wickets each for 25 and 26 runs respectively while Abu Nechim Ahmed and Chahal chipped in with a wicket each.

Earlier, a sensational six hitting exhibition by Yuvraj late in the innings took Bangalore to 186 for four.

Yuvraj shared a 79-run partnership with Sachin Rana (15 not out) for the unconquered fifth wicket as Bangalore scored 79 runs in the last five overs to end their innings with a flourish. A B de Villiers contributed a useful 33 off just 17 balls.

Yuvraj, who received criticism from some quarters for his indifferent form in recent times, began with three sixes off successive balls off South African leg-spinner Imran Tahir to gather 21 runs in the 17th over and then smashed a maximum each in the next two overs bowled by Mohammed Shami and Siddarth Kaul.

The star batsman reserved for the best for the last as he hammered Rahul Shukla for 27 runs in the final over, belting four consecutive sixes.

The Bangalore innings got off to a decent start after Chris Gayle made 22 off 23 balls, smashing two sixes and and a four during his knock. The big-built West Indian, who is yet to get a big score under his belt in this IPL, got out off pacer Rahul Shukla as he tried to smash the ball on the legside only to get an inside edge that uprooted the stumps.

Captain Virat Kohli (10), who is yet to fire from his bat in this IPL so far, once again disappointed the fans as he failed to ground his bat while trying to steal a second run of the throw of Shukla from fine leg.

AB de Villiers walked into the middle when Bangalore were in the spot of bother after losing two quick wickets with just 45 runs on the board coming from 8.1 overs.

Along with Yuvraj, de Villiers rebuilt the Bangalore innings. De Villiers smashed four boundaries and a six in his 33-run knock off 17 balls and he departed with Bangalore struggling at 107 for four in 14.2 overs before Yuvraj took centrestage.