Sunrisers Hyderabad stay in hunt with win over Royal Challengers

A clinical performance by the Sunrisers Hyderabad top-order ensured a seven-wicket victory against Royal Challengers Bangalore which kept them in the hunt for the Play-offs in the seventh edition of the Indian Premier League in Uppal on Tuesday.

Chasing a target of 161 riding on Virat Kohli's (67) first half-century of the tournament, Sunrisers knocked off the runs in 19.4 overs as Shikhar Dhawan returned to form with a stroke-filled 50. 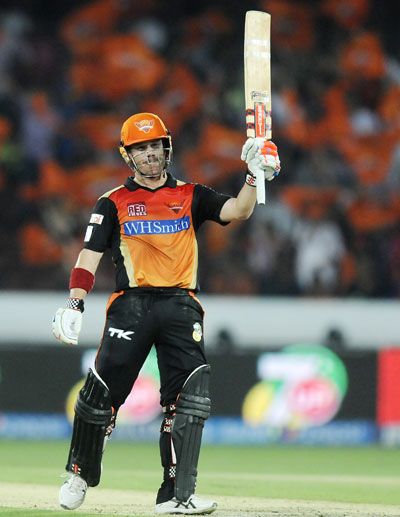 While Shikhar started the chase in right earnest, David Warner, back in the opening slot, smashed his way to 46-ball-59. It was skipper Darren Sammy, who smashed a six off the penultimate over by erratic Varun Aaron to decisively turn the game.

Both Sunrisers and RCB have 10 points from 12 games each but Virat Kohli's men are a place ahead at fifth with a better net run-rate.

During the chase, it was Dhawan's 39-ball innings had seven fours and a six, Warner hit three fours and four huge sixes. The opening duo sealed the match with an even-100 stand in 12.3 overs.

It was Dhawan, who attacked from the onset with some flowing cover drives and a hooked six off Aaron. The 50 came in the last over of the Powerplay as Warner took off after that.

Out of his sixes, the first was a charge to Muttiah Muralitharan followed by a couple of clean hits off the half-trackers that Yuzvendra Chahal had on offer. The fourth six off Abu Nechim Ahmed was over long-off.

Earlier RCB captain Kohli was back in form at the nick of time as Royal Challengers Bangalore scored a respectable 160 for six after opting to bat on a difficult track.

Kohli struck his first half century of the seventh edition with a free-stroking 67 off 41 balls studded with four boundaries and as many sixes. AB de Villiers (29, 17 balls) and Yuvraj Singh (21) made small contributions.

It was largely due to Kohli's contribution that RCB scored 112 runs in the back 10 having crawled to 48 for two in the first 10 overs.

'Purple Cap' holder Bhuvneshwar Kumar again was the prime performer for the Sunrisers with two for 27 in four overs. Parvez Rasool, playing his first game of the tournament replacing Amit Mishra, also had more than a decent outing with figures of one for 26.

The first half certainly belonged to Kohli, who came early after Parthiv Patel was caught plumb in-front by Bhuvneshwar. He took a few balls to settle down but then played some signature shots through the off-side.

Out of his four sixes, two were hit off one over from Karn Sharma. Kohli charged down the track and hit him over straight boundary for a six while the other one was an inside out over extra cover for the second six. The other two sixes came off Darren Sammy and Irfan Pathan.

The two significant partnership that Kohli was involved were 57 for the third wicket with Yuvraj and more importantly 61 in only 5.1 overs with De Villiers.

Kohli's highest score this season till the current match was 35. He got to his 50 off 34 balls. He was finally out in the 18th over trying to hit Irfan Pathan out of the ground and was caught by Dale Steyn.

De Villiers also followed suit but Sachin Rana (12 no) hit a couple of boundaries to take the score to 160.

Image: David Warner of the Sunrisers Hyderabad raises his bat after scoring a fifty 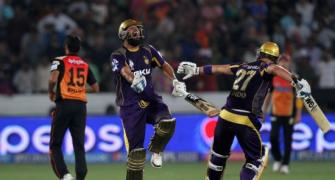 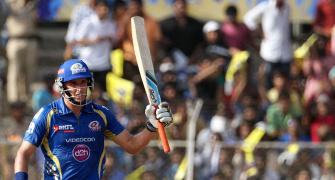 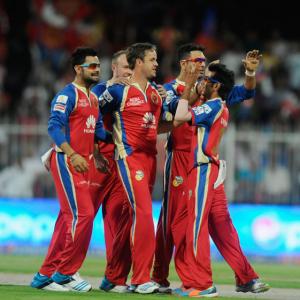 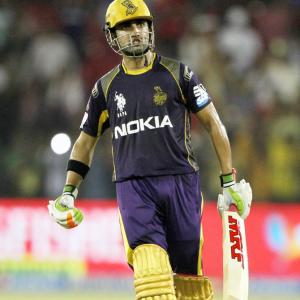 IPL Extras: Wouldn't have reacted if I had nicked that delivery, says Gambhir