Riding on half-centuries from their openers Mike Hussey and Lendl Simmons followed by excellent performance from their spinners helped Mumbai post a comfortable 25-run victory over Rajasthan Royals in a one-sided Indian Premier League encounter in Ahmedabad, on Monday.

Electing to bat first, Mumbai posted a competitive 178 for three courtesy of the 120-run opening stand between Simons (62) and Hussey (56). In reply, Rajasthan kept losing wickets at regular intervals and finished on a disappointing 153 for eight. Karun Nair top scored with a sizzling innings of 48 off 24 balls but the rest of the batsmen failed to give him any support. Brad Hodge (40) and James Faulkner (31) staged a late attack but in the end it proved to be well short.

Mumbai's spinners did most of the damage led by veteran Harbhajan Singh, who claimed brilliant figures of two for 13 from four overs, while Pragyan Ojha took two for 30 from his four overs and debutant leg-spinner Shreyas Gopal bagged two for 25.

Rajasthan's baffling decision to rest the performing trio of Ajinkya Rahane, Pravin Tambe and Steven Smith backfired big time despite Shane Watson coming back to lead the team after recovering from his injury.

Despite the loss, Rajasthan stay third with 14 points from 12 games, while Mumbai, who have eight points from 11 matches, kept their slim hopes alive.

Unmukt Chand (2) perished early when he pulled a short ball from Pragyan Ojha straight into the hands of Hussey at the deep midwicket, while Shane Watson also departed cheaply when he was caught at midwicket off the same bowler after he miscued the pull shot.

Sanju Samson (2) also played early to a Krishmar Santokie slower ball to give his wicket away as Rajasthan were reduced to 42 for three in the sixth over.

While Karun was playing his strokes at other end, Kevon Cooper was dismissed by a sheer piece of fielding brilliance from Kieron Pollard standing at the long-on boundary. Cooper hit a Harbhajan delivery which would have been a sure six had any other fielder save Pollard manning that area.

The tall West Indian timed his jump to perfection as he plucked a one-handed catch but the momentum was forcing him over the ropes. He kept his balance and threw the ball inside before he turned in a flash to dive in front and completed a stunner to leave everyone shocked.

Australians Hodge and Faulkner provided some entertainment towards the end as they put on 69 runs for the eighth wicket but the hosts still fell short.

Earlier, Mumbai Indians top-order fired in one of the rare occasions as they put up a competitive 178 for three in their 20 overs after a century-plus opening stand.

Comeback man Mike Hussey (56) and Lendl Simons (62) put on 120 runs for the opening stand, which incidentally was the first three-figure partnership for the visitors in 30 games.

The last time Mumbai had a century stand was when Sachin Tendulkar and Dwayne Smith conjured 163 runs against the same opposition during the 2012 edition.

Skipper Rohit Sharma showed his big-hitting prowess during a 19-ball cameo that fetched him 40 runs with three fours and four sixes. Rohit and a subdued Kieron Pollard (14 not out) added 56 for the third wicket in five overs.

Hussey and Simons started cautiously trying to get a measure of the slow Motera track. Hussey, coming back to the team after a disastrous UAE leg, looked confident as he played some fluent drives and cuts peppering the in-field.

Simons also proved to be an able partner as he started slowly but picked up the pace as time progressed. Both ran well between the wickets converting a couple of singles into twos.

When Faulkner dropped one short, Hussey was quickly on backfoot to pull it in front of square for a six.

Hussey's second six was a slog sweep off left-arm spinner Ankit Sharma into the mid-wicket stands.

Simons also joined the fun as he lofted an ultra-slow delivery from Rajat Bhatia into the deep midwicket stands while lofting Kevon Cooper over long-off for his second six.

Hussey was the first to reach the half-century of 32 balls while Simons took 43 balls to attain the individual landmark.

Their 100-run partnership, Mumbai's first of the season came in the 13th over.

Rajasthan drew the first blood immediately after the second strategic time-out as Ankit got both Simons (62) and Hussey (56) within a space of two deliveries -- both caught in the deep by Cooper.

Left-arm spinner Ankit ended with impressive figures of two for 23 in four overs but the rest of the bowlers proved to be expensive. 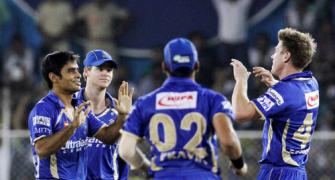 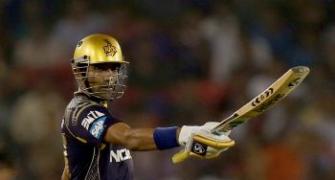 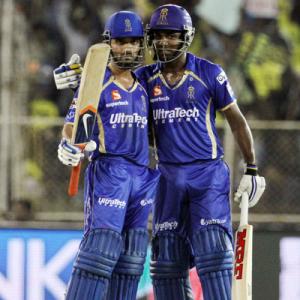