Defending champions Mumbai Indians kept their hopes of making it to the play-offs with a clinical seven-wicket victory over Sunrisers Hyderabad, in Hyderabad, on Monday.

Chasing Hyderabad's modest total of 157 for 3, made possible by a late assault from David Warner (55 not out) and solid batting by opener Aaron Finch (68), Mumbai cruised home with eight balls to spare. Earlier, electing to bat, Hyderabad were tied down for most part of their innings and it seemed they would fall short of 150 before the last two overs yielded 33 runs.

Finch played the role of sheet-anchor as he stayed till the penultimate over of Hyderabad’s innings, sharing 63 runs for the third wicket with Warner from nine overs. He hit seven boundaries and two sixes in his 62-ball knock.

The in-form Warner was largely instrumental in taking the score past 150 as he smashed two sixes off Lasith Malinga in the penultimate over and two boundaries off the final two balls of the innings bowled by Kieron Pollar as Hyderabad scored 15 and 18 runs from the last two overs.

Opener and captain Shikhar continued his struggle and could contribute just 11 from as many balls in his side's first match at home this season. He was out to the last ball of the fifth over, Malinga uprooting his middle stump as he went for a drive outside the line.

One-down Lokesh Rahul was run-out in the 10th over while going for a non-existent single. He tried to return to the crease after running half-way down the pitch, but not before Chidhambaram Gautam broke the stumps.

For Mumbai, Malinga took two wickets for 35 runs off his four overs.

Mumbai lost an early wicket when CM Gautam was caught at mid-off by Dhawan off Bhuvneshwar Kumar in the second over of the innings for one.

But Simmons and Rayudu played positively to put Mumbai back on track. Simmons was particularly impressive as he targetted the two leg-spinners -- Amit Mishra and Karn Sharma.

Simmons took 16 runs off Irfan Pathan in the fifth over with two sixes and a four. Pathan was the unfortunate bowler as he was also picked by Rayudu for special treatment in his next to concede 29 runs from his two overs.

Leg-spinner Amit Mishra was also expensive as he conceded 33 runs from his three wicketless overs to add to the woes of Hyderabad who were playing their first match at home in IPL-7.

Rayudu, who hit seven fours and two sixes off 46 balls, and Simmons, whose 50-ball knock included five fours and four sixes, batted positively with regular boundaries throughout their partnership.

The duo, however, were out in quick succession -- in the 16th and 17th overs off Bhuvneshwar (2/21) and Moises Henriques (1/23) respectively but Mumbai were already in control till then.

Rohit Sharma (14 not out) and Kieron Pollard (6 not out) steered their team home as Mumbai reached 160 for three in 18.2 overs to notch up a much-needed win to stay afloat in the tournament. 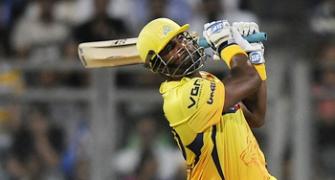 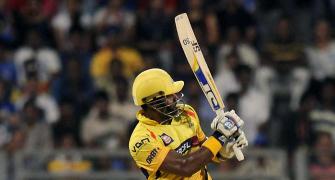 Stats: Dwayne Smith is only next to Maxwell 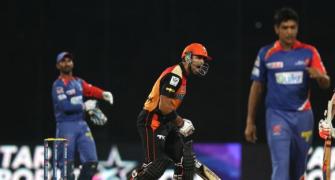 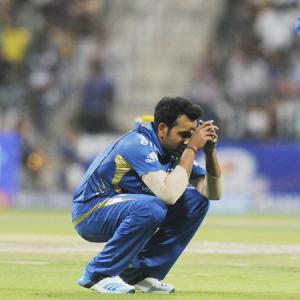 Tough task on hand for Mumbai Indians against resurgent Hyderabad 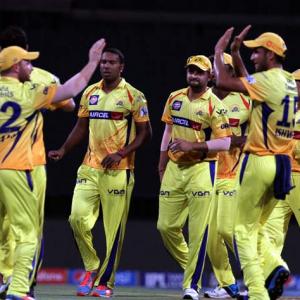