Miller, Sandeep shine as Punjab prove too good for Bangalore On Friday night in Bangalore they scored another emphatic victory, beating Royal Challengers Bangalore by 32 runs, to consolidate their position atop the eight-team table.

Put in to bat, their batsmen again fired unison to post an imposing 198 for eight, with the in-form David Miller smashing 66 off 29 balls.

In reply, Bangalore could muster only 166 for nine, as AB de Villiers ran out of partners despite another heroic effort of 53 from 26 balls.

If Miller delivered with the bat, it was Sandeep Sharma who again did the star turn when Punjab bowled, providing early strikes and finishing the day with figures of 3 for 25.

But the surprise package of the night was an unheralded 20-year-old off-spinner, Shivam Sharma, playing his first competitive match at the senior level.

Bowling like a classical off-break bowler, who could both flight and turn the ball, he returned brilliant figures of two for 26 in four overs.

Seamer Sandeep, one of the discoveries of this IPL, wreaked havoc as he blasted off the top-order during an inspired first spell. He angled one away from Chris Gayle (4), who flashed at the ball and Wriddhiman Saha pouched it behind the stumps.

Off his next delivery, which wasn't a good one, he saw Virat Kohli trying to tuck the ball down only to give Wriddhiman a catch down leg-side.

This was Kohli's third duck in the tournament and now shares the ignominy with Kolkata Knight Riders’ captain Gautam Gambhir.

Bangalore were reeling at 26 for three and it soon became 39 for four when Sachin Rana (18) was cleaned all ends up by an arm ball from Akshar Patel.

Yuvraj Singh (3) again wasted too many deliveries, thus putting a lot of pressure on De Villiers, before he was fooled by a flighted delivery from Shivam. The lad tossed it up and Yuvraj, trying hit over mid-wicket, saw the ball turn for Sehwag to gobble it at first slip.

Shvam, unafraid to flight the ball, also got a bit of purchase off the pitch.

Albie Morkel (16) hit a couple of sixes as Glenn Maxwell went for 24 in his single over. However young Shivam got his second wicket when Morkel went for a hoick only to be caught by George Bailey at short third-man.

De Villiers, however, carried on from where he had left against Sunrisers to complete a 50 off 25 balls with successive sixes of Lakshmipathy Balaji.

Having hit five sixes, he was unlucky trying to hit the sixth when Balaji fired one wide and his slog over cover was taken by the fielder at the ropes.

Once De Villiers was gone, it became a mere formality for the visitors.

Earlier, Miller and Wriddhiman Saha (17) steadied the innings after Punjab slumped to 116 for four in 11.4 overs after Virender Sehwag and Mandeep Singh gave the side a rollicking start, adding 60 runs in 35 balls.

Maxwell again blasted his way to 25 off 10 balls before being caught at the deep mid-wicket fence off Yuzvendra Chahal's bowling, trying to go for his third six.

One of the finds of this IPL, Chahal was the pick of the bowlers with figures of two for 23 in four overs.

Once Miller got set, he scored runs at a brisk pace. He hit eight boundaries and three sixes off only 29 balls before departing in the 17th over of the Punjab innings.

Saha also contributed in Punjab's massive total by supporting Miller as they notched 54 runs in only 4.5 overs.

The Bangalore wicketkeeper was scalped by Harshal Patel at long-off by AB de Villiers, trying to loft a slower delivery.

Image: Sandeep Sharma and Virender Sehwag celebrate the fall of a wicket 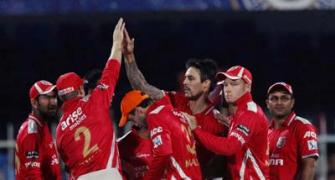 Focus on Maxwell, Gayle as Kings XI Punjab-Bangalore face off 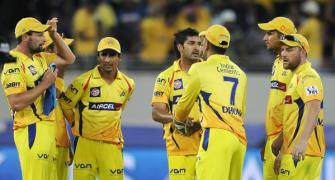 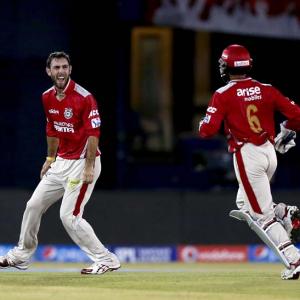 Maxwell is more destructive than me, Gayle: Sehwag