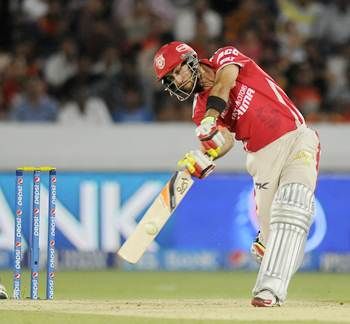 So far, this is Glenn Maxwell's IPL. With Kings XI Punjab qualifying for the play-offs, it could be the Australian all-rounder’s tournament all the way, just as it was with Chris Gayle last season.

With a most valuable player index (MVPI) of 702, Maxwell has proved to be unstoppable with the bat, having smashed 531 runs in 11 matches, at an amazing strike rate of 195. He is well ahead of his closest challenger, Robin Uthappa, who is second with a MVPI of 545. (Our data is corrected up to the end of IPL match 47 on Tuesday night).

The most valuable player index (MVPI), that we devised on Rediff.com over a decade ago, collapses a player's batting, bowling and fielding performances into a one-dimensional 'run equivalent'.

The best MVPI scores are obtained if a player scores a lot of runs at a high strike rate, takes a lot of wickets at a low economy rate, and is responsible for the most number of catches and stumpings.

The higher the MVPI, the better is the player's performance. If the MVPI reminds you of the calculations now used in those cricket fantasy games it may not be coincidence.

We also talk in these columns of the Paisa Vasool index (PVI), which measures how much a player earns for every 'run equivalent' that he contributes.

Obviously, the lower the player’s PVI, the greater his value to the franchise.

We must, however, alert readers that some of the player price figures may be wrong. But that is unlikely to change the big picture -- that the Indian Premier League continues to be cricket's most lucrative enterprise!