Punjab qualify for IPL play-offs after shaky win against Delhi

It was Punjab's ninth win and made them the first team to make it to the play-offs. 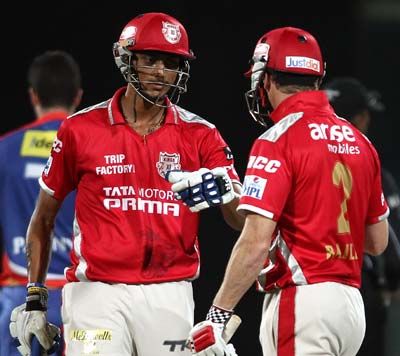 Chasing 165 for victory, Punjab rode on a breezy 67-run opening stand between Virender Sehwag (23) and Manan Vohra (42
off 19 balls) to overhaul the target in 19.4 overs.

Vohra dazzled with four fours and three sixes to entertain the packed house at the Kotla as the Punjab opening duo scored 66 runs in the powerplays. South African leg-spinner Imran Tahir (3-22) struck after the drinks -- in the seventh over -- to deny Vohra his fifty.

But, Glenn Maxwell soon brought the crowd to its feet as the orange-cap holder effortless swiped Tahir for a huge six between mid-wicket and long-on.

Feeling at home till now, Sehwag also tried to follow Maxwell and did hit a six but soon the Delhi-born chased one outside-the-off delivery to be caught at sweeper cover off Proteas off-spinner Jean-Paul Duminy.

Maxwell's (14) stay was also short-lived as Tahir cleaned up the dangerman with a perfect googly and celebrated the prized wicket with a little run in the inner circle. But, Delhi were hungry for more as Duminy, from the other end, came around the wicket to fox an in-form David Miller (2) as the hosts sensed an upset with Punjab at 95 for four.

Wriddhiman Saha (13) and Akshar Patel (42 not out) then stitched a 33-run fifth-wicket partnership to take Punjab closer to their target.

With 38 runs required, Mohammed Shami sent back Saha to give some hope to the home crowd but Patel carried on sensibly. The left-hand batsman hit three boundaries off Wayne Parnell to ease the pressure as a happy George Bailey (6) watched from the non-strikers end.

Bailey fell to Tahir's guile in the penultimate over but there was no twist in the tale as Rishi Dhawan (8 not out) hit the winning runs off Parnell.

After Monday's win, Punjab remained on top top with 18 points from 11 matches while Delhi continued to languish at the bottom with four points from 12 matches.

Earlier, Delhi batsman Dinesh Karthik struck a 44-ball 69 to help the hosts manage 164 for seven. Delhi could have made a bigger score but they lost their last five wickets for the addition of just 18 runs as they were 140 for two in the 17th over.

Put into bat, Delhi did not have the best of starts after opener Murali Vijay (5) was scalped by Sandeep Sharma for five in the third over.
Skipper Kevin Pietersen (49 off 32 balls) then took it upon himself to get quick runs for Delhi in the powerplays.

The Englishman was harsh on Hendricks as he smashed the left-arm pacer for two fours and a six to help Delhi get 18 runs in the fourth over. The hard-working Dinesh Karthik also got going with a few boundaries that prompted Punjab think-tank to introduce left-arm spinner Akshar Patel in the sixth over.

Combining the right dose of caution and aggression, the second-wicket partnership gained momentum with each passing over and the Pietersen-Karthik duo took Delhi score to 71 for one till the first drinks break after the eight over.

Punjab skipper George Bailey continued to juggle his bowling options and Patel's left-arm spin got dangerman Pietersen, whose knock was laced with six fours and a six, back in the dug out to break the 71-run partnership.

After keeping KP quite in the first couple of deliveries, Patel deceived the captain's outside edge to rattle the middle and off stump and was a wicket maiden. Joined by new-man JP Duminy, Karthik continued to get runs as Delhi got to the 100-run mark in the 14th over. The
wicketkeeper-batsman punished the Punjab bowlers to all parts of the ground en route to his fourth half-century this season.

But Duminy (17), who tried to replicate Karthik's aggressiveness, was holed out at wide long-on by Glenn Maxwell while attempting a big hit off Hendricks. The third-wicket partnership though got Delhi 56 runs. Maxwell soon took another catch to dismiss Kedar Jadhav for nought off Sandeep.

Mayank Agarwal raised some hopes of a full-on attack in the final three overs by belting Sandeep for a huge six but was bowled next ball while attempting a reverse sweep.

Karthik, hitting seven fours and three sixes in his crucial knock, also failed to go for the kill in the end as he went after Hendricks in the 19th over only to get out.

Hendricks struck for the third time in his spell and second in the over to send Wayne Parnell out for two as Punjab checked Delhi in the final overs. The final over off Patel yielded just five runs. 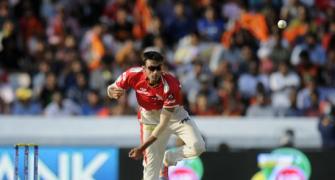 'Bailey allows me to set my own fields' 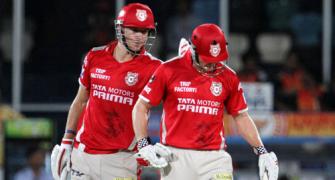 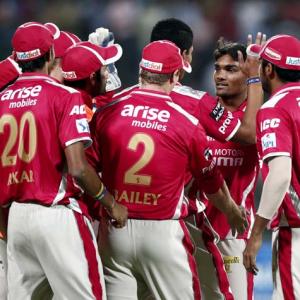 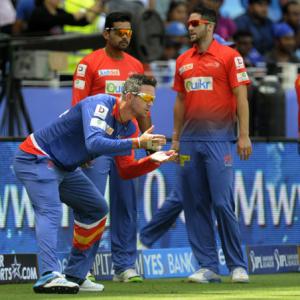