Putting up an all-round show, Kolkata Knight Riders consolidated their fourth position in the points table with a comfortable seven-wicket win over Sunrisers Hyderabad in an IPL match in Hyderabad on Sunday.

None of the Sunrisers batsmen could play an innings of substance as the hosts settled for a modest 142 for eight after electing to bat. They paid the price of not building partnerships on a wicket that had bounce but still offered plenty to batsmen.

David Warner was the top scorer for Sunrisers, smashing his way to 18-ball 34. Had it not been for some small contributions from Naman Ojha (22) and Irfan Pathan (23 not out), Sunrisers would have struggled to get close to 150-run mark.

KKR easily knocked off the target with two balls to spare as Yusuf Pathan anchored the chase with an unbeaten 39-knock, which had two fours and as many sixes.

Pathan's 45-run stand for the third wicket with Manish Pandey (35) was crucial as it came in a quick time and when KKR did not have much runs on the board.

Pandey was dismissed when he tried to accelerate more but Pathan ensured that he stayed till the end to see the side home. He hit Bhuvneshwar Kumar for a six at the start of the 18th over and eventually took 14 runs.

Steyn conceded just six runs in the penultimate over, leaving KKR to score 10 runs from the last. Ryan ten Doeschate's (25 not out) six in the second ball ended all Sunrisers's hopes of a miraculous win.

KKR remain in fourth position but have taken their tally to 12 points while Sunrisers remained in sixth with eight points.

When Gautam Gambhir was given caught behind despite not nicking Dale Steyn, it was not the start KKR were looking at. And when Steyn deserved a wicket, he did not get it as Shikhar Dhawan failed to latch on to a mis-hit from Robin Uthappa. The KKR batsman added salt to the wound by flicking the next ball from the tearaway paceman for a six.

Nevertheless, Sunrisers bowlers were well in control, allowing the hosts to score only 30 runs in six overs. Uthappa was trying too hard hard but was not getting his timing.

Sunrisers bowlers kept tightening the noose as boundaries almost dried up as KKR managed only 60 runs at half-way mark.

They had wickets in hand and that was a big advantage. Yusuf Pathan cut his brother Irfan for a boundary and Manish Pandey opened his arms by creaming off Amit Mishra for a two fours and a six, providing the innings much-needed impetus.

Sunrisers opener Aaron Finch (8) was far from convincing as edges flew of his bat. One such edge off a moving delivery from Umesh Yadav was superbly taken by Morne Morkel at third man.

Dhawan, who was relived of captaincy, yet again failed to build on a start as his edged off Narine was taken by Gambhir on second attempt.

The left-handed opener was striking the ball clean and elegantly. His cover drives off Morkel were simply majestic even as he was guilty of playing a few rash shots.

On the other end, Ojha took some time to settle as Sunrisers reached 41 for two in the power-play overs.

Warner, who has rescued Sunrisers on many occasions, straight away lifting Shakib for a six over long on. Ojha treated Ryan Ten Doeschate the same way and also launched Hasan for a massive straight six, getting some quick runs for the side.

However, he too frittered away the start, handing a simple catch to Yusuf Pathan at point.

Gambhir brought on his best bowler, Narine to put more pressure on Sunrisers batsmen, but Warner kept going for his shots, smashing the West Indies spinner for a big six.

Warner found two boundaries in Morkel's over but Lokesh Rahul (14) was trapped by Piyush Chawla. Paceman Yadav returned and got rid of dangerous Australian to reduce the hosts to 104 for five, bringing new captain Darren Sammy (7) in the thick of action but he too disappointed.

Image: Umesh Yadav celebrates after picking up a wicket 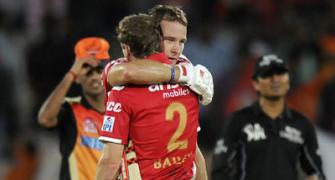 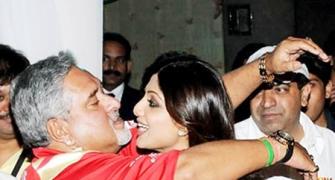 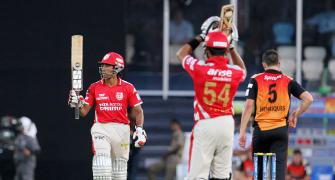 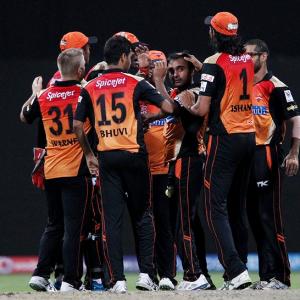