Electing to bat, KKR posted a decent 166 for five, thanks to some brilliant batting by Robin Uthappa (55) and Manish Pandey (48) at Dubai International Stadium.

Delhi Daredevils batsmen responded to the challenge well and overhauled the target with three balls to spare.

Karthik batted superbly in the top order while Duminy finished it off in style with a six off Piyush Chawla.

Like KKR, Delhi too had to endure a bad start as Murali Vijay (0) was run out in the first over. Mayank Agrawal was off to a superb start as he hit some terrific shots but could not stay long at the crease as his short but entertaining 26-run knock was ended by Morne Morkel.

Karthik and Ross Taylor had a job at hand but the Kiwi batsman was bowled by Jacques Kallis and Delhi skipper was joined by JP Duminy at the crease.

Karthik batted intelligently as he rotated the strike well and waited for bad balls to punish. He hit Piyush Chawla for a six and a four in the 10th over, gradually moving towards a half-century.

He completed his fifty with a sweetly timed chip off Shakib Al Hasan in the cover region but could not finish it off for his side, becoming a victim of wily spinner Sunil Narine. Attempting a reverse sweep, Karthik could not read the line and was found plumb in front of the wicket. 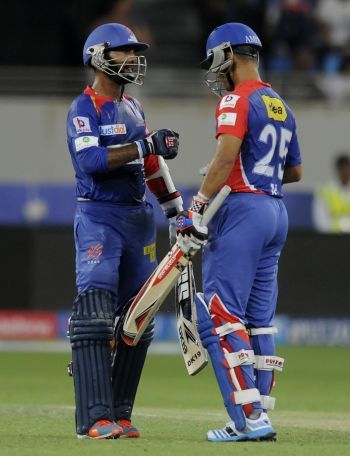 Jimmy Neesham hit a huge six off Chawla and Duminy hit two sixes off country-mate Morkel to get close to the target.

DD required six runs off the last over, Chawla started well with a dot and wicket of Neesham in the second to make it interesting. Duminy sealed the fate of his side with a six off Chawla in the next ball.

Karthik's 56 came off 40 balls with seven boundaries including two sixes while left-handed Duminy faced only 35 balls, hitting three fours and as many sixes in his match-winning knock.

Earlier, Robin Uthappa (55) and Manish Pandey (48) batted sensibly under pressure to guide Kolkata Knight Riders to a competitive 166 for five.

Uthappa patiently added 64 runs for the third wicket with Pandey and then quickly shared a 57-run stand for the fourth wicket Shakib Al Hasan (30 not out) to lift KKR to a decent total after electing to bat.

KKR had lost both the openers cheaply but Uthappa and Pandey set the platform for an exciting finish as they collected 103 runs in the last 10 overs.

Pandey's 48 came off 42 balls with five shots to the fence while Uthappa took 41 balls for his knock, which had six boundaries.

Hasan also played a crucial role in KKR's progress with his unbeaten cameo off 22 balls. He hit a six and two fours.

Pacemen Mohammed Shami and Nathan Coulter-Nile provided a sensational start to Delhi by removing both the openers before they could even open their accounts.

Shami had dangerman Jacques Kallis caught at first slip for a golden duck while Coulter-Nile extended Gautam Gambhir's poor run by having the KKR skipper caught in leg-slip region for his second successive duck in the tournament.

Shami struggled for control but swung the ball both ways to trouble the KKR batsmen. In bowling friendly conditions, boundaries were hard to come, so Pandey and Uthappa relied on singles and twos to steady the innings.

KKR innings' first four came in the fifth over when Pandey pulled one from Shami to mid-wicket boundary. The two batsmen batted cautiously and took their side to 63 for two at half-way stage.

Pandey broke the shackles by hitting Shabaz Nadeem for two successive boundaries but the left-arm spinner got his revenge by castling the batsman in the last ball of 11th over.

Hasan was aggressive from the start as he lifted Nadeem for a six over mid-wicket and Uthappa creamed off a six and a four off Jimmy Neesham to take KKR total 112 for three from 15 overs.

Uthappa departed shortly after completing his fifty but Hasan stayed on smartly to end the innings in style. 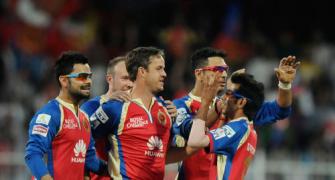 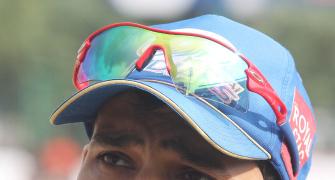 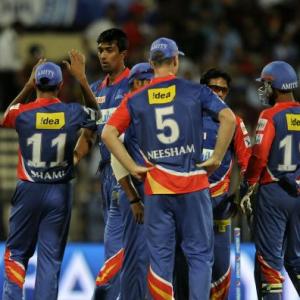 Delhi look to get campaign back on track against KKR 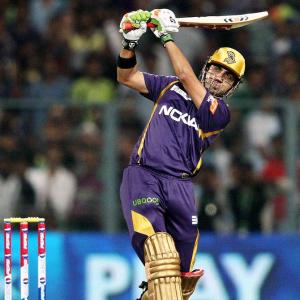