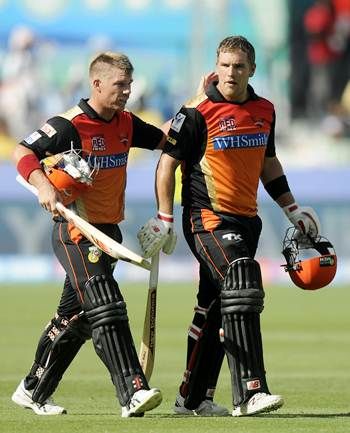 Sunrisers Hyderabad rode on brilliant batting by Aaron Finch and David Warner to notch a four-run victory over Delhi Daredevils in Friday’s IPL match in Dubai.

Electing to bat, Hyderabad posted a formidable 184 for 1 -- Aaron (88) and Warner (58) stitching a 128-run stand for the unconquered second wicket -- and then restricted Delhi to 180 for four to register their first victory this season.

Chasing a stiff target of 185, Delhi were on course at 86 for no loss at the end of the first 10 overs, but ran out of steam once openers Quinton de Kock (48) and Murali Vijay (52) were out in the 12th and 13th over respectively.

J P Duminy (20 off 7 balls) and Manoj Tiway (23 off 13 balls) made a last-ditch effort but in vain. They took the game down to the wire but the asking rate by then had gone too high.

Daredevils captain Pietersen, who made it to the playing eleven after recovering from a finger injury, struggled in his first match this season; he looked rusty and tentative, before falling for 16 in the 17th over.

Coming out to bat at number three in the 12th over at the fall of de Kock's wicket, Pietersen, who was bought by Delhi for a whopping Rs 9 crores, took four balls to open his account and then could not hit a boundary for 13 deliveries, when the team needed them to bring down the asking rate.

By the time, he opened up with a six off Darren Sammy in the penultimate ball of the 16th over, the asking rate had shot up to over 14 runs.

In fact, Delhi lost momentum in the five overs between 12th and 16th when Pietersen and Dinesh Karthik (15) were batting. Both fell in successive balls in the 17th over off the bowling of fast bowler Dale Steyn.

Delhi needed 49 from the last three overs and Tiwary and Duminy hit a flurry of fours and sixes to give themselves a chance. It came down to 20 runs from the final over but Duminy and Tiwary could score only 15.

For Hyderabad, Steyn took two wickets for 33 runs while Karn Sharma and Darren Sammy got one apiece.

Earlier, a fine 128-run partnership between Finch and Warner infused life into Hyderabad’s innings, which looked ordinary in the first ten overs.

Delhi, boosted by the return of their regular captain Kevin Pietersen, put up a decent performance with the ball in that period, with spinner Shahbaz Nadeem producing economical figures of 4-0-24-1.

However, Finch and Warner broke the shackles following the dismissal of their skipper Shikhar Dawan (33) to steer the team to a formidable total.

The Australian pair’s unbroken second wicket came off 82 deliveries. Finch was the more destructive of the two, smacking Jaydev Unadkat for 18 runs from just four deliveries of the 18th over, which yielded 21.

Unadkat was, in fact, the most expensive Delhi bowler, conceding 43 runs in his four barren overs.

Barring Nadeem, all of Delhi's bowlers came in for severe thrashing, strike pacer Mohammed Shami ending up with figures of 0-36 in his four overs.

Dhawan and Finch gave Hyderabad a steady start, collecting 56 runs for the first wicket. Even though the pace of scoring was not too high, it set the platform for Finch and Warner to go on the rampage.

While Finch struck eight fours and four sixes, Warner smashed three boundaries and an equal number of hits over the fence.

Image: Hyderabad Sunrisers' David Warner and Aaron Finch walk back after their fine partnership against Delhi Daredevils on Friday. 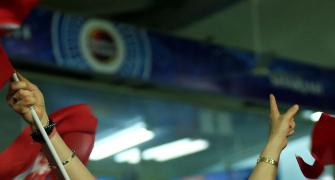 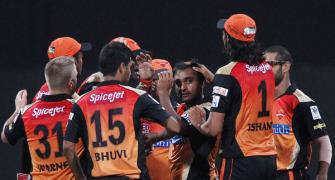 Sunrisers Hyderabad look to bounce back against Delhi Daredevils 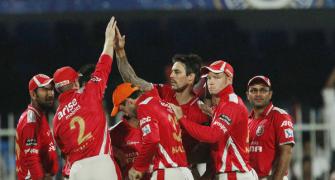 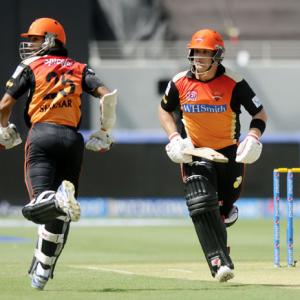 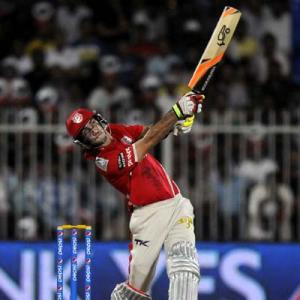